Quotes after qualifying in Shanghai 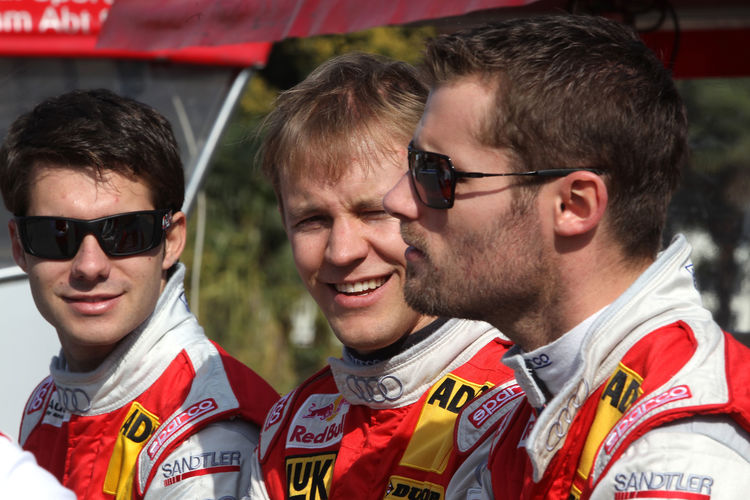 The qualifying for the DTM’s finale in Shanghai (China) was marked by numerous incidents which affected the Audi squad as well. Quotes after the turbulent qualifying.

Dr. Wolfgang Ullrich (Head of Audi Motorsport)
“First, I’d like to pay a big compliment to the organizers. To create such a completely new street circuit from scratch in a really short time is a major feat. There has definitely been a huge effort invested here. That this could also harbor a few problems here and there was to be expected. But it’s also clear that such a track doesn’t forgive any mistakes. We felt the full force of that today. First, Darryl (O´Young) wanted a little bit too much and then Timo (Scheider) lost his car in the fastest corner. That meant we lost any chance of starting from the first row. For tomorrow’s race we can say that it’ll be won by those who’ll make the fewest mistakes.”

Timo Scheider (GW:plus/Top Service Audi A4 DTM #1), grid position 4
“Our strategy was right. We waited a little and then used just one set of tires each time. The sessions were repeatedly stopped due to various accidents. This is what determined the qualifying in the end. Then my own accident happened. While running on a painted directional arrow I lost the car and turned in hard. Thank God, nothing happened to me personally. The car is heavily damaged. Looking at the pictures, we’re fortunate that Martin (Tomczyk) showed such a good reaction. If I hadn’t turned away toward the inside but had flown toward the outside there might have been another collision. So I got off lightly and am on the second row.”

Markus Winkelhock (Playboy/GW:plus Audi A4 DTM #14), grid position 5
“The result is good. It’s my best result in qualifying this year. Still, I’m not completely happy. Third place would have been possible. I could have driven even faster because my best lap wasn’t perfect. So I’m pleased on the one hand and a bit frustrated on the other but, on the whole, I’m not unhappy.”

Miguel Molina (Audi Bank A4 DTM #18), grid position 7
“The first two parts of the session went particularly well. In the third part I would have needed more laps to get the tires to warm up more. You pick up speed on each lap here. In the end I finished seventh. Now we’re in for a race in which overtaking will be difficult. So a good strategy will be crucial.”

Martin Tomczyk (Red Bull Cola Audi A4 DTM #6), grid position 8
“The qualifying became a bit mixed up due to the red flags. On the whole, I was pretty pleased. At the very end, Timo (Scheider) spun in front of me. It was extremely fortunate that I managed to get past him. Otherwise it would have been a lot worse. The good part is that we were able to prevent this. The bad part is that I was driving my fastest sector times exactly on this lap, but wasn’t able to finish it. Still: safety and the health of other drivers are more important.”

Mattias Ekström (Red Bull Audi A4 DTM #5), grid position 9
“We still made some technical changes during the session. Now I’m very happy with our car. Unfortunately, our strategy didn’t work out in the end. We took a bit of a gamble to achieve more. In summary, I can say that I’m pleased with the car as well as with my own performance, but we didn’t clinch the position we wanted.”

Oliver Jarvis (Tabac Original Audi A4 DTM #2), grid position 10
“Although my car remained unharmed the qualifying was very difficult. We had planned a good strategy. But unfortunately the red flags were waved at the most unfortunate times for me. I didn’t manage a single free lap up to qualifying 3. The problem was that I wasn’t feeling the grip of the tires in Q1 and Q2. When I felt grip in Q3 the tires had gone past the point of their best performance. Q1 and Q2 would have been very important for my self-confidence.”

Mike Rockenfeller (S line Audi A4 DTM #10), grid position 13
“Q1 was going well. Then the red flag came. It was difficult to find a rhythm afterwards. In Q2 our timing was wrong when I went out. Honestly speaking, the same happened to us again in Q3. On the whole, the situation was a bit chaotic. Three or four of my laps were destroyed by Mercedes drivers. They were all running at low speeds in the penultimate turn to pick up momentum afterwards. That was a shame because I’d gained two or three tenths on each lap up to that point. That was difficult. My qualifying was over then. 13th place is disappointing. However, I’m sure that a lot can happen in the race here. I’m also hoping it will, but not to me!”

Katherine Legge (Glamour Audi A4 DTM #15), grid position 14
“Although the result is one of my better ones this year I’d have had to do a much better job yet. On my last lap, when the red flag came, I was four tenths faster than before. Obviously that’s disappointing because I know that we could have been much quicker. But with so much having gone on, the fact that I made it through qualifying unscathed is a bonus in itself. Now I’m looking forward to Sunday. I’m sure it’ll be an interesting race.”

Darryl O’Young (Du Shi Li Ren Audi A4 DTM #9), grid position 18
“The team prepared an excellent car for me. My Audi felt very good. I was gaining self-confidence. Everything was going well until I slipped in an apex in one of the turns. As a result, I hit the track barrier in the penultimate corner. Something was damaged in the process and I hit the opposite wall too. It’s simply very narrow there and a single mistake costs you dearly. I’m very disappointed. The last thing I wanted was to have an accident. But it was the qualifying session and I wanted to set a fast time.”

Hans-Jürgen Abt (Team Director Audi Sport Team Abt Sportsline)
“You could see that this circuit doesn’t forgive anything. It’s also very difficult to keep the car on the track on this slippery surface. In Timo’s (Scheider) case you could clearly see how quickly something can happen. He had a very severe accident. Our other cars were on a fast lap when the qualifying was stopped. That’s too bad because in total the result doesn’t look good. Now we’ve got to prepare Timo’s car again by Sunday. And I’m sure that we’ll be seeing a thrilling race.”

Ernst Moser (Team Director Audi Sport Team Phoenix)
“The positive thing is that Darryl (O’Young) is okay. It’s a shame that the first qualifying was stopped by the red flag. At that time he was running pretty far at the front and setting superb times. But then he must have gotten overambitious. He was always running at the limit in Q2, no matter where you could watch him on the TV screens. He went as far as he could but then unfortunately turned in a little too early and touched the wall. ‘Rocky’ didn’t get beyond tenth place in any of the three sessions. That makes me angry. I had thought that we were quicker. We could have been three or four places better than position 13 but were slowed twice – once by CongFu Cheng and once by Maro Engel. Maybe we would have made it into the top ten. But that would have been the maximum. This is frustrating and we’ve got to find out what the reasons were.”

Arno Zensen (Team Director Audi Sport Team Rosberg)
“We knew that the qualifying was going to be thrilling. But the sessions being stopped twice was really a shocker. That’s why I’m happy for two reasons: Thank God we didn’t end up with any scrap on Saturday afternoon. In addition, Markus (Winkelhock) has been running fast throughout the weekend. Although he feels that a little more would have been possible, I’m very pleased with fifth place. He’s the second-best Audi driver. ‘Well done,’ he deserves it. Congratulations to Katherine (Legge) as well. Due to the problem in the morning she almost didn’t get to drive at all. In qualifying she achieved pretty good times. If it hadn’t been for the stop of the session she’d have even made up a few places.”