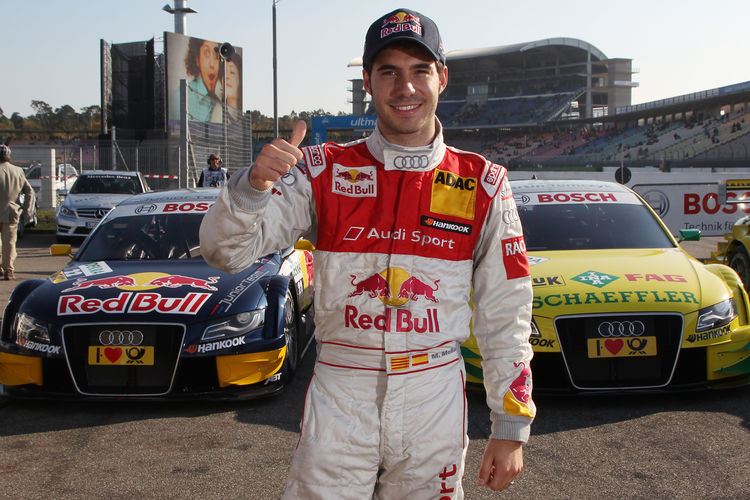 At the DTM’s season finale the Spaniard Miguel Molina in the Red Bull Audi A4 DTM will start from his second pole position this year (Sunday from 1:45 p.m. – local time – on “Das Erste”). Two other Audi racers, the new champion Martin Tomczyk and Mike Rockenfeller, made it into the top four as well. Quotes after qualifying.

Dr. Wolfgang Ullrich (Head of Audi Motorsport)
“It was a very thrilling and close qualifying session. It’s nice that one of our year-old cars is again at the very front and that Miguel (Molina) clinched his second pole position. Martin (Tomczyk) and Mike (Rockenfeller) had the chance of taking P1 as well. But it was obvious again that our competitors are very strong and that simply everything’s got to fit. I’m happy for Miguel – and on the whole we’ve got a good base for the final race.”

Miguel Molina (Red Bull Audi A4 DTM), grid position 1
“I’m very happy about my second pole position this year. I’ve got to thank the team that did a superb job after we had a problem with the car yesterday. I also want to thank Audi and my family for their support. I’m proud to be starting into the last race of this DTM era from the top spot on the grid. We’ve got the best starting base tomorrow and will try and do a good job to turn into the best possible result.”

Martin Tomczyk (Schaeffler Audi A4 DTM), grid position 3
“That was nice! It was really tight today, a nice way to close this year’s DTM season. After Valencia, making it into Q4 was a way of thanking my team. In the last qualifying segment it didn’t quite work out, I lost some time in the last turn. On top of that, I needed two laps in the third session. So my tires weren’t so fit anymore. Still, I’m pleased. I’ll be starting into the race alongside Mike (Rockenfeller), which is great. We’ll manage ...”

Mike Rockenfeller (E-POSTBRIEF Audi A4 DTM), grid position 4
“In the end, fourth place is basically a good result. It’s incredibly tight in all the qualifying sessions. As early as in Q3 I squeezed everything out of the car. I only needed one lap and was thus optimistic for Q4. But I made one or two small mistakes. As a result, the time gap is relatively large. Grip simply wasn’t very good anymore at the end. I’m not unhappy with fourth place and am hoping for a podium finish on Sunday.”

Timo Scheider (AUTO TEST Audi A4 DTM), grid position 5
“Fifth place is okay, but the car could have done better than that today. In turn 5, at the entrance to the Arena, the rear wheels slightly locked. As a result, I missed the apex and lost some important tenths. I need to take a close look at why that actually happened. In any event, it wasn’t a good lap. From P5 quite a bit is possible. Podium must be our aim because there’s never been any doubt about our race pace.”

Oliver Jarvis (Audi Sport performance cars A4 DTM), grid position 8
“After free practice I thought that we had a good chance of making it into Q4. But in qualifying I was simply lacking grip. That’s why eighth place was the best that was possible. With a good pace in the race we can make up some ground.”

Filipe Albuquerque (TV Movie Audi A4 DTM), grid position 9
“Qualifying was incredibly close, we knew that beforehand. But three thousandths of a second are nothing. Once you’re in Q3 you can fight to make it into Q4. But now I’ve got to live with this and hope that we can score points in the race. The top five would be fantastic. But overtaking will probably be difficult.”

Mattias Ekström (Red Bull Audi A4 DTM), grid position 10
“When you’re not perfect, then you end up in tenth place of the grid. And I wasn’t perfect today. Starting from P10 is always difficult. We’ve got a good car and can make up some ground. It’s certainly possible to overtake some vehicles but it won’t be easy.”

Edoardo Mortara (Playboy Audi A4 DTM), grid position 11
“I made too many mistakes and paid for it in the end. I wasn’t surprised about being eliminated in qualifying so early. The DTM field is so close and if you’re not one hundred percent comfortable with the car it’s difficult to clinch a good result. Free practice was very good on new tires but on used ones we’re always fighting at the limit. Now we’re starting into the race from position eleven – that’s not so bad. But I damaged a few parts due to the accident. I’m sorry for my team – this was my second mistake in a row.”

Rahel Frey (Glamour Audi A4 DTM), grid position 18
“Time, unfortunately, is passing very quickly. Like at the season opener, I’m on position 18. Now I’ve got to give everything in the race. In qualifying I didn’t feel the same grip as I did this morning in free practice and had slight oversteer. That’s disappointing because I thought that I’d be able to move forward some more this weekend. I feel more comfortable in the cockpit and am better able to handle the car now.”

Hans-Jürgen Abt (Team Director Audi Sport Team Abt Sportsline): “We’re totally delighted about Miguel’s performance. He kept his cool and did an absolutely top-class job. I’m incredibly happy for him because he suffered so much misfortune this season. Things aren’t looking bad for the team championship either. Mike Rockenfeller is within striking distance. Hopefully we’ll be able to get Mattias Ekström farther toward the front. If you know Mattias, then you know that he’ll always fight. We can be happy with our team result as well: all five Audi cars are in the top ten.”

Ernst Moser (Team Director Audi Sport Team Phoenix): “It’s fantastic when you’ve made it into the top four and can start from position three. This has been yet another outstanding performance by Martin (Tomczyk)! From this position anything is possible on Sunday. I’m already looking forward to it. You can tell that he’s no longer carrying a load on his shoulders. Martin is driving totally unencumbered, which his result shows. In the first qualifying segment we made three sets of tires available to Rahel (Frey). We wanted to see her in Q2 at all cost. Unfortunately, that didn’t work out. But the gap is small.”

Arno Zensen (Team Director Audi Sport Team Rosberg): “For Filipe (Albuquerque) it was really a shame to be eliminated because of three thousandths of a second. I’ve got no idea whether anything would still have been possible on his last outing, but then Edo (Mortara) flew into the gravel trap and the yellow flags were waved. Due to this excursion Filipe couldn’t improve any more. It was also a shame for Edo. A lot was possible today, as Miguel Molina has shown. Actually we were doing well all weekend. In any event, we’ve got the chance to score points from positions nine and eleven.”