Skip to content
We are using cookies for a better user experience.
11/17/19
Macau/Neuburg a. d. Donau
Sports

Links
{{ activeItem() }}
Twitter
02/28/20
“Very technical and a very different way of setting up the car according to the track. Looking forward to a very go… https://t.co/37bYZxQVFd
02/28/20
Race times and broadcast schedule for the @FIAFormulaE Marrakesh E-Prix. The lights go green tomorrow at 15:04 CET/… https://t.co/nYCze406G0
02/28/20
Good morning from Marrakesh. Preparing for Shakedown (14:00 CET) &amp; FP1 (16:45). @Daniel_Abt &amp; @LucasdiGrassi have b… https://t.co/OAurEpFLxO
02/27/20
Utilizing the sun: @LucasdiGrassi visited the very impressive Noor Power Station near Ouarzazate, Morocco. The worl… https://t.co/bsfs63yoPZ
Audi Sport on Twitter
{{ activeItem() }}
Facebook
02/26/20
On track in Africa this week: the 2020 ABB Formula E Marrakesh E-Prix in Morocco on Saturday, February 29. >> audi.com/FormulaE #PerformanceIsAnAttitude #MarrakeshEPrix
02/24/20
He’s a busy man: from Mexico to Monza, Kempten and all the way back home to Switzerland (... even some gardening). Catch up with Nico Mueller in our latest #DriversDiary to find out what he has been up to this past week. >> audi.com/DTM #PerformanceIsAnAttitude #DTM
02/21/20
We’re always searching for technology to shape the future: Before the ABB Formula E Mexico City E-Prix, Daniel Abt and Lucas Di Grassi had a look at an exciting company developing artificial trees. >> audi.com/FormulaE #PerformanceIsAnAttitude #MexicoCityEPrix
02/17/20
Another week, another new episode of our #DriversDiary of Audi DTM factory driver Nico Mueller. Follow his week to find out what he was up to in Mexico City. >> audi.com/DTM #PerformanceIsAnAttitude #DTM
Audi Sport on Facebook 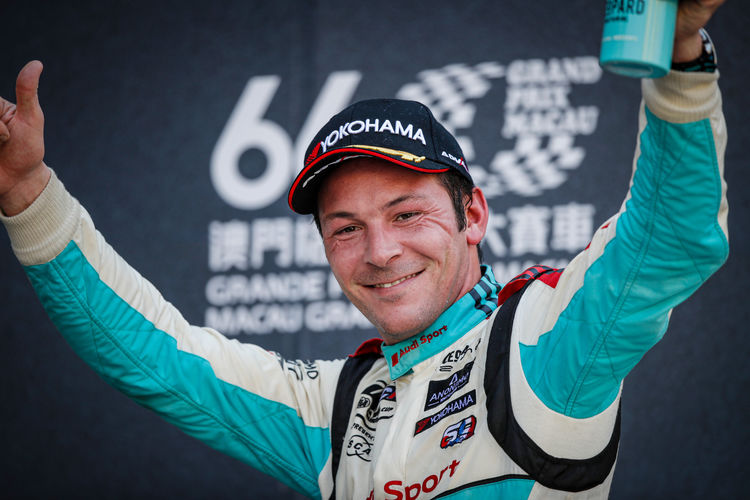 Audi Sport customer racing is returning from the race weekend in Macau with a trophy. The most successful Audi Sport driver was Jean-Karl Vernay in an Audi RS 3 LMS, who finished the WTCR – FIA World Touring Car Cup in third position. In the FIA GT World Cup, Phoenix Racing, on clinching two fifth places, scored the best result of the Audi R8 LMS.

“Macau was intensive once again and created a lot of work for our teams,” says Chris Reinke, Head of Audi Sport customer racing. “Congratulations to Jean-Karl Vernay and Leopard Racing Team Audi Sport on clinching a podium in the FIA WTCR. Frédéric Vervisch showed very good fightbacks as well. With the second spot on the grid in the FIA GT World Cup, we had secured a good starting base for the qualification race which, unfortunately, we weren’t able to convert into a corresponding race result. Ernst Moser with his Phoenix Racing team and our Audi Sport driver Christopher Haase, on finishing both races in fifth position, clinched the best result for us. Many thanks for that.”

For the eighth time this season, the Audi RS 3 LMS achieved a podium finish in the WTCR – FIA-World Touring Car Cup. On the challenging city street circuit in Macau, Jean-Karl Vernay with Leopard Racing Team Audi Sport had qualified for the third spot on the grid for race three. In a very balanced front field, the Frenchman successfully defended his position against the attacks of his immediate rival but, just like the competitors around him, was unable to overtake another car. During the course of eleven laps, the quartet at the front had pulled clear of the field by 18 seconds. As a result, Vernay finished on podium for the third time this season.

In both of the two preceding races, Frédéric Vervisch from Comtoyou Team Audi Sport delivered a remarkable fightback. In the first sprint race, the Belgian stormed forward from eleventh to seventh position, marking the fastest lap time in the process, while in race two, Vervisch even improved from 18th to eighth place. His teammate, Niels Langeveld, posted 13th position in race three as his best result of the weekend, whereas Gordon Shedden from Leopard Racing Team Audi Sport became a victim of the intricacies of the 6.12-kilometer circuit as early as in qualifying. One rival hit the rear end of the Scotsman’s Audi RS 3 LMS and damaged the chassis structure so heavily that contesting the races was no longer possible. As the only one of six wild-card entrants, Billy Lo recorded two results in the points. The driver from Macau racing for Tian Shi Zuver Team was one of just two guest entrants in the first qualifying session and the only one in the second to have managed the leap across the qualification hurdle. In his Audi RS 3 LMS, Lo clinched 23rd in the first and 25th place in the third race. Following the city street race in Macau, the finale is coming up on the calendar of the touring car drivers. In four weeks’ time, the FIA WTCR will contest round ten on the circuit at Sepang in Malaysia.

In the FIA GT World Cup, Dries Vanthoor had secured the best starting base in Macau. The Belgian from Audi Sport Team WRT had started the qualification race in second position, but retired on lap one following contact with the guard rail. Kelvin van der Linde from Audi Sport Team Rutronik was in the eighth spot on the grid, but a rival hit his Audi R8 LMS in the qualification race. Due to his retirement, the South African was able to start the main race only from 13th position and went on to improve by three positions. From the last spot on the grid, Vanthoor managed a fightback to eighth. Christopher Haase in an Audi R8 LMS from Phoenix Racing had secured seventh position on the grid after a small mistake in qualifying. In the qualification race, he improved to fifth position, which he claimed again in the main race as the best Audi Sport driver. The best one of two privateer drivers of an Audi R8 LMS was Charles Weerts. From the tenth spot on the grid, the 18-year-old Belgian clinched seventh position in the first race and, following a drive-through penalty for jump starting, finished Sunday’s race in twelfth place. Chen Weian from Audi Sport Asia Team TSRT in his debut recorded 13th place in the main race as his best result.

In just six days’ time, the grand GT3 finale is coming up for Audi Sport customer racing. In the final event at Kyalami, South Africa, Audi Sport Team WRT with Frédéric Vervisch will be battling for the title in the Intercontinental GT Challenge.