{{ activeItem() }}
Twitter
10/30/20
“In the corona crisis, Audi is proving its resilience and thus maintaining its financial scope to continue investin… https://t.co/7cEd6VvYZt
10/29/20
Partners in sustainability. @FCBayern leads the way off the field with a new electric fleet. Find out more about t… https://t.co/XBVJE52EiG
10/28/20
Sustainability pioneers. @FCBayern is leading the way with their new electric fleet. Find out more about the part… https://t.co/KXkfAY4XLI
10/28/20
Join our first #digital MQ! Innovation Summit: International pioneers and experts will discuss #sustainability,… https://t.co/Q2OgCjqXzy
Audi on Twitter
YouTube
10/28/20 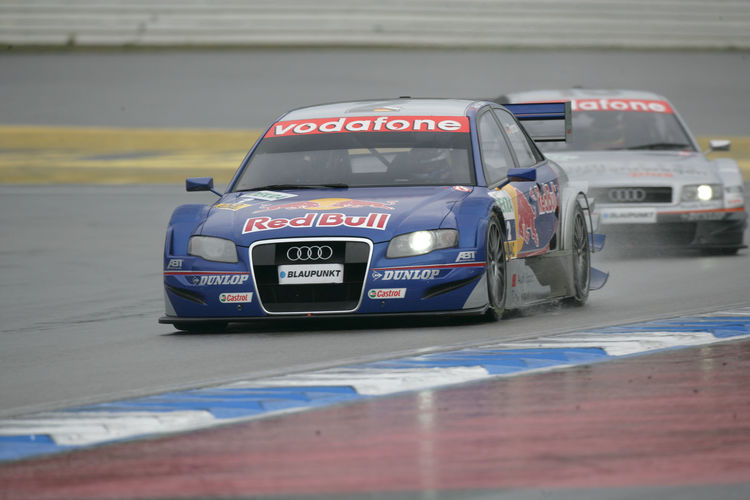 On Friday, Martin Tomczyk was the quickest Audi driver in the DTM tests at Hockenheim that were dominated by changing weather conditions. It was only shortly before the end of the second test in the afternoon that the Bavarian, driving for Audi Sport Team Abt Sportsline, slipped from first to second place. Quickest Audi driver in the morning’s first test in the rain was Frank Stippler at the wheel of last year’s A4 entered by Audi Sport Team Joest.

Because of the reduced testing opportunities on a dry track, on Friday afternoon the Audi drivers fully concentrated on gathering as much data as possible with different set-ups for the qualifying practice and the race.

The first ‘acid test’ of the DTM finale at Hockenheim will be the qualifying session at 1.30 p.m. (local time) on Saturday. ARD will broadcast live, starting at 2 p.m.

Martin Tomczyk (Audi Sport Team Abt Sportsline #2)
4th place / 2nd place, 1m 35.521s
“I wished this was the first Friday of the season... Things have never gone as well for me this year as they did today – both in the wet and in the dry. I know that I deserve being up front and that’s where I want to stay. The car seems to be running well. Let’s see how things continue.”

Frank Stippler (Audi Sport Team Joest #19)
3rd place / 8th place, 1m 36.030s
“Today, in the rain, we primarily tried to learn something about the tyres and did less work on the set-up. In dry conditions we tried a few things, although after two years the A4 has a very good basic set-up and at some point you start going around in circles.”

Mattias Ekström (Audi Sport Team Abt Sportsline #1)
14th place / 11th place, 1m 36.177s
“We tried a lot of different things both in the wet and in the dry, and now we’ve definitely got a good base to start from tomorrow. We still have to improve a bit more but we’re heading in the right direction.”

Pierre Kaffer (Audi Sport Team Joest Racing #15)
11th place / 12th place, 1m 36.189s
“Things went well in the rain. At the end I went out on slicks, but that was too early. Twelfth place in the dry is okay. We tried improving a few minor things on the car. But I think that today isn’t very conclusive if the track develops more grip and gets faster tomorrow.”

Christian Abt (Audi Sport Team Joest Racing #14)
17th place / 13th place, 1m 36.268s
“Generally I’m satisfied because our work was strictly focused on the race. My long run was very good. I did my fast lap on the eighth lap. Tomorrow we’re going to fully concentrate on the qualifying and try to make it into the Super Pole again.”

Tom Kristensen (Audi Sport Team Abt #5)
7th place / 14th place, 1m 36.276s
“The wet morning session gave us only a short time for testing in the dry. That’s why we tried a lot of different things in the afternoon. On good tyres the car was not in the right performance window. But I’m sure it will be tomorrow. Even today, there were a lot of spectators here. I’m sure this weekend is going to be a sparkling finale with a super show in front of a great crowd.”

Allan McNish (Audi Sport Team Abt #6)
16th place / 18th place, 1m 36.671s
“The day was a little disappointing in terms of the positions. In the wet the car was reasonably well balanced. Unfortunately, I dropped some positions towards the end when the track was at its quickest. On the dry track the car was really good at the beginning. Apparently the changes we made went slightly in the wrong direction because on new tyres I was slower than at the beginning. So I think we have to retrace our steps a little bit for tomorrow.”

Dindo Capello (Audi Sport Team Joest #18)
20th place / 20th place, 1m 37.022s
“My brakes were really unpredictable today, which caused a lot of mistakes. Sometimes the front wheels would ‘lock’, at other times it was the rear wheels. I expect we’ll be able to solve the problem overnight.”

Hans-Jürgen Abt (Team Director Audi Sport Team Abt Sportsline): “We’ve got changing weather conditions here and have to try and prepare for any contingency. In the end, we decided not to use new tyres today in order to use our ‘full power’ tomorrow.”

Ralf Jüttner (Technical Director Audi Sport Team Joest): “We’ve had similar weather conditions several times this year. At least the second session was dry, so we were able to complete our full programme. So far everything has been going according to schedule. I still believe that the new cars have improved quite a bit compared to the first race. That’s why it will be difficult for us to make it into the Super Pole.”

Dr Wolfgang Ullrich (Head of Audi Motorsport): “Martin (Tomczyk) seems to have returned to his usual form. He was very quick in both tests. Because it was raining in the morning, we tried different things with our cars in the afternoon. I have no doubt that we’ll be able to come up with a decent set-up based on the different findings.”