Grand finale for Audi: WEC season’s last round in the desert 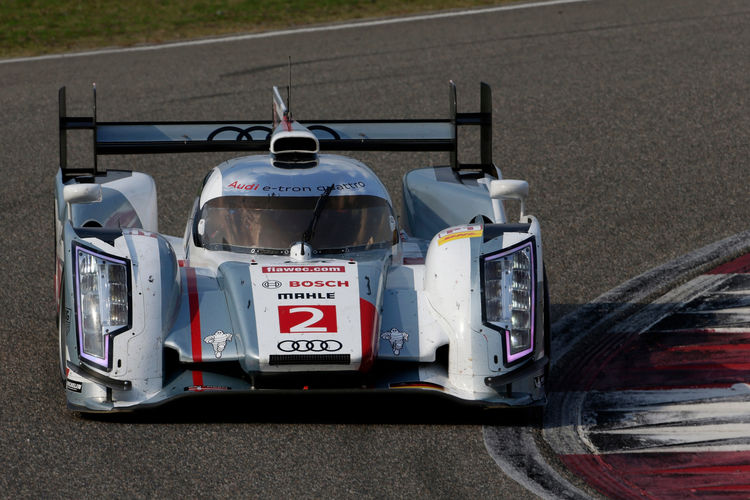 Audi’s endurance race team led by Head of Audi Motorsport Dr. Wolfgang Ullrich and Chris Reinke, Head of LMP, has achieved all sporting aims in the FIA World Endurance Championship (WEC) early this season. Therefore, the finale on November 30 will be the icing on the cake for Audi Sport Team Joest.

Five qualifying best times, six victories, the early title win in the manufacturers’ World Championship plus the early title captured by Loïc Duval/Tom Kristensen/Allan McNish (F/DK/GB) in the drivers’ classification* – Audi has brought about all sporting decisions before the WEC finale and successfully defended the 2012 titles. As a result, the brand can tackle the finale without pressure. In Bahrain, an era in endurance racing will come to an end, as the event will mark the last time for a round to be held under the regulations that have been in effect until now. Next year’s regulations, focused on the aim of saving energy, will change the sport so fundamentally that virtually not a single bolt to be used in Audi’s future LMP sports car will be the same as in the current race car.

The Audi R18 e-tron quattro and its predecessors have shaped this era. Since 2011, the various evolutions of the R18 have contested a total of 22 endurance races and won 13 of them. In the Le Mans 24 Hours, the race cars from Ingolstadt and Neckarsulm remained unbeaten in all three years. Technologically, Audi was at the top as well – be it with the downsized 3.7 liter TDI engine and its innovative twin-flow turbocharger, ultra-lightweight design featuring the first CFRP transmission housing of a sports car that demonstrates the brand’s lightweight construction expertise, the e-tron quattro hybrid concept or production-based detailed solutions such as the Matrix LED headlights and the digital rearview mirror with an AMOLED display. Now, after six WEC race wins and the success at the Sebring 12 Hours, Audi is aiming for the eighth sports car triumph of the year. The 5.412-kilometer track in the desert of Bahrain is unique in many respects. For example, it is possible that the hottest temperatures of the year will be encountered there. When Marcel Fässler/André Lotterer/Benoît Tréluyer (CH/D/F) at last year’s WEC debut race at Bahrain celebrated victory, extreme demands were made on ‘man and machine’ with outside temperatures of nearly 40 degrees centigrade. This year, the race is held two months later. The thermometer at this time of the year shows about ten degrees less and even though the checkered flag will be waved at 21:00, which is about four hours after sunset, air temperatures will have hardly dropped by that time. The operating temperatures of numerous technical components are correspondingly high and the time for which the tires will last across the distance has a crucial effect on the strategy. Additionally, the sand blown onto the track from the desert significantly changes grip on the tarmac – all of these factors making for plenty of ingredients to promise a thrilling race in an important region.

For Audi, the Middle East is a growth region. Between January and October, the brand increased its deliveries in the area of the Gulf Cooperation Council (GCC) by 11 percent and on the single market of Bahrain even by 24 percent.

Fans can again look forward to watching the race on the internet. Audi offers live streaming on www.audi-motorsport.com. Additional background information is available on the Audi Sport App as well as on Twitter and Facebook.

*Subject to the official publication of the results of the FIA

-Will Audi manage to take its seventh WEC win of the season in Bahrain?
-What team is best prepared to handle the heat in the desert?
-Will the race be similarly thrilling as the WEC races at Austin and Shanghai?

Dr. Wolfgang Ullrich (Head of Audi Motorsport): “Our whole squad has achieved everything there was to be achieved early and, following the Le Mans victory, has clinched both WEC titles as well. Therefore, we can compete in the Championship in Bahrain without any pressure. It goes without saying that we’re going to be on the grid with high expectations there too. Our aim is to win in the desert, as we did last year, and to achieve a nice close of the season for Audi.”

Chris Reinke (Head of LMP): “Bahrain will be the last run for our current Audi R18 e-tron quattro. Our hybrid sports car has taken ten victories within just 17 months. This is a track record the whole outfit from engineering and development through to the test team and the race team of Audi Sport Team Joest can be proud of. Of course we’re aiming to appropriately bid farewell to the R18 e-tron quattro in Bahrain before a new technological era begins in the 2014 season.”

Ralf Jüttner (Technical Director Audi Sport Team Joest): “While winter is just around the corner in Germany, we’re running in the desert at Bahrain. We entered new territory with the WEC there a year ago and competed at a nice, modern facility. The organizer put a lot of effort into the event as well. For us, there’s only one aim: We want to win the finale too.”

Marcel Fässler (37/CH), Audi R18 e-tron quattro #1 (Audi Sport Team Joest)
-Clinched the third WEC victory of the season with his team-mates most recently in China
“It’ll be nice and warm at Bahrain. There’s almost a vacation mood at this race because we’re very close to the sea. Of course, in the cockpit, the heat means hard work in an endurance race. After our success in China, we’d like to close the season in Bahrain with another top result.”

André Lotterer (32/D), Audi R18 e-tron quattro #1 (Audi Sport Team Joest)
-Celebrated his 32nd birthday on November 19
-Won the race in Bahrain with his team-mates in 2012
“Last August, it was so hot in Bahrain that racing was really hard work. We’re hoping that it won’t be quite as hot at the end of November. After seven events, we’re tackling round eight with a single aim as well. In Bahrain, we want to again show that Audi’s got the best car.”

Benoît Tréluyer (36/F), Audi R18 e-tron quattro #1 (Audi Sport Team Joest)
-Drove the fastest race lap most recently at Shanghai
“The season finale is always a very special event. Besides that, we can probably expect the hottest temperatures of the year there. We’d like to continue where we left off on taking last year’s victory. Historically, it would also be nice to win the last race under the current regulations before a completely new car arrives in 2014.”

Loïc Duval (31/F), Audi R18 e-tron quattro #2 (Audi Sport Team Joest)
-Will be driving in the WEC in Bahrain for the first time but knows the circuit from Formula 3
“The track in Bahrain is really not easy. There are many challenging turns and we’re driving in the middle of the desert. Grip conditions change frequently due to the sand. I enjoy the track and driving in this region. I’m happy that now I’m going to compete there in a WEC race car for the first time.”

Tom Kristensen (46/DK), Audi R18 e-tron quattro #2 (Audi Sport Team Joest)
-Celebrated victory in the drivers’ World Championship with his team-mates at Shanghai
“Following our title win, I’m very much looking forward to Bahrain. It’s a bit of an adventure because we normally don’t drive in the desert on such a special track. A good balance will be very important there to precisely handle the different cornering radii. In 2012, it was extremely hot. This year, we’re experiencing our finale there – hopefully with slightly lower temperatures.”

Allan McNish (43/GB), Audi R18 e-tron quattro #2 (Audi Sport Team Joest)
-On taking the WEC title, has fulfilled a long-held dream in racing
-Qualified for the pole position in Bahrain last year
“We’re traveling to Bahrain with the early title wins in the drivers’ and manufacturers’ classifications, and second place in the standings for our sister car has been confirmed as well. This means we can tackle our tasks without any tactical constraints. No-one’s got anything to lose. We’re aiming for the seventh victory in the eighth race of the season. This year, the Audi R18 e-tron quattro seems to be even a bit better suited for this very special track in Bahrain. I’m excited.”

The Audi drivers in Bahrain

Marcel Fässler about the track in Bahrain

“The factor that pushes ‘man and machine’ to the limit is the heat. The track features changes between very slow and fast sections, which result in a stop-and-go rhythm. In the first turn, the apex is not visible. Then the track leads uphill to the next turn. A fluid left-right-left combination follows before we turn right again to approach the most difficult turn. In a slight left-hand bend, we brake on entering a downhill hairpin turn. The left front wheel tends to lock on braking into this turn. After the next straight and a left-hand bend another combination of corners follows where we can really feel the downforce. The right-hand hairpin turn permits many different lines. It is followed by a long straight and after another right-hander we’re heading back for the start and finish.”