Flashback: Le Mans 2014 and the most efficient race car 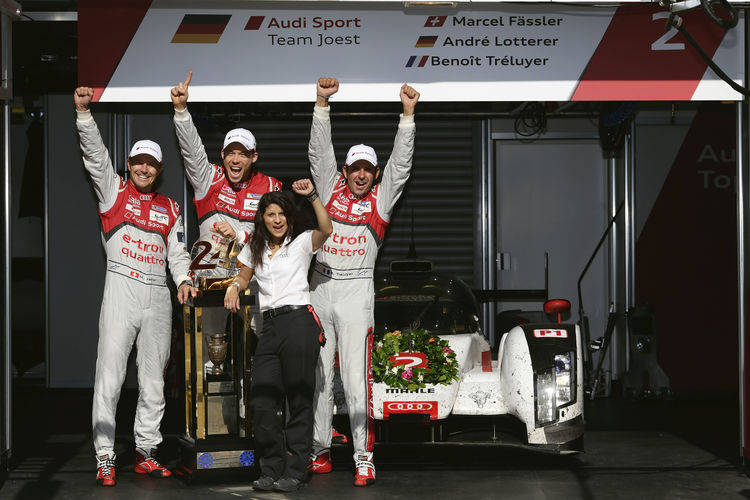 This weekend, Audi will be battling for its 14th victory in the Le Mans 24 Hours. The aim, again, is to cover the longest distance with maximum efficiency because, since 2014, regulations have been in effect that require the teams to achieve the maximum from a specified amount of fuel. Audi was already the best in this discipline in the debut year.

Audi defeats Porsche and Toyota – that was the headline in 2014, following Audi’s fifth consecutive victory at Le Mans. The race was undecided up to the penultimate hour. Only then did Marcel Fässler (CH), André Lotterer (D) and Benoît Tréluyer (F) prevail against the Porsche drivers and scored the brand with the Four Rings’ 13th victory. Similarly impressive was the efficiency with which this win was achieved. The Audi R18 e-tron quattro covered 5,165.391 kilometers – 662.5 more than the year before when the race was marked by many caution periods. A few figures illustrate the efforts made by the Audi engineers. The new four-liter V6 TDI engine, together with all other developments, helped reduce consumption in a single step by 22 percent compared with the 2013 season. Since the beginning of the TDI era at Le Mans in 2006, Audi even saved 38 percent fuel.

In terms of lightweight design, Audi managed a major step as well. The engineers saved 45 kilograms of weight in the LMP sports car compared with the model from the previous year. As a result, the R18 e-tron quattro weighed only 870 kilograms.

“These steps are enormous,” Benoît Tréluyer says approvingly. For him and his fellow campaigners Le Mans 2014 was a strenuous race throughout. The Frenchman and his team-mates initially chased the leading Toyota before Audi took position one. Then a technical issue caused the number ‘2’ Audi of Fässler, Lotterer and Tréluyer to lose ground and the sister car, number ‘1,’ took the lead. “There were ups and downs but our team spirit always stayed intact,” says Tréluyer. “When number ‘1’ was running in front, we were sure that our colleagues had made it and my two team-mates and I would definitely not have begrudged them this success.” But then this car lost time due to a setback and dropped back. Consequently, the Fässler/Lotterer/Tréluyer race car crossed the finish line in first place.

In the 2015 season, this driver trio has already won two races of the FIA World Endurance Championship (WEC), so this year the three-time Le Mans winners are again among the favorites in a competition in which another impeccable run of the most efficient race car at Le Mans will be crucial.