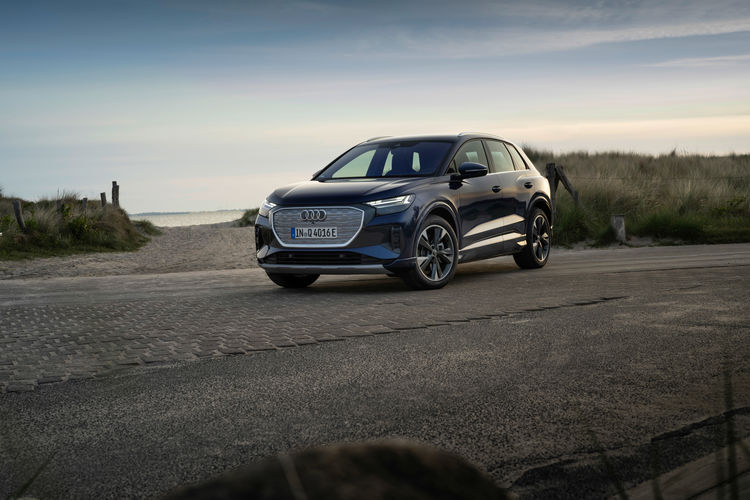 Many people view switching from a vehicle with an internal combustion engine to an electric car as a monumental step. In reality, however, it is significantly less eventful – as four Audi employees recently discovered during test drives in the all-electric Audi Q4 e-tron. This opportunity wasn’t available to just anyone; the carmaker invited employees to apply for a spot before the official launch. These test drives in the Q4 e-tron, which lasted several days, were intended to put people’s preconceived notions about e-mobility to the test – and provided an opportunity to get a glimpse into the lives of Audi employees, the heart of the company, and the transformation of mobility itself.

“I normally drive a plug-in hybrid from Audi and was eager to see how an all-electric car compares,” said test driver Stefanie Zieglmeier, who works in marketing and sales in Ingolstadt. Her initial concerns included whether the capacity of the battery would be sufficient enough to travel long distances and where and how quickly she could recharge it.

In order to extensively test the electric car, she and her partner selected some destinations for a weekend trip in advance – first into the mountains, then to the city of Würzburg. The Audi Q4 40 e-tron’s design and level of comfort immediately impressed them, as did its 150 kW of power and responsiveness. Only the range gave her an uneasy feeling at first. “Since I had no idea exactly how much power the car actually consumed,” admitted Zieglmeier, “I initially didn’t even have the guts to turn on the air conditioning.” She quickly realized that her worries were unfounded, however. Consumption isn’t far from the norm, even with a cooled interior, and the Q4 40 e-tron’s range extends up to 520 kilometers according to the WLTP cycle – making the car perfectly suitable for long trips. In addition, the battery can be quickly recharged at high-power charging (HPC) stations with up to 125 kW of power. After extensively testing the vehicle over a period of several days, Stefanie Zieglmeier concluded: “This is a car that is completely suitable for everyday use.”

The many personal encounters with other drivers, on the other hand, were not something she experienced every day, she recalled. At charging stations, the Audi employee was repeatedly approached by people who wanted to know more about e-mobility in general and the Q4 e-tron in particular. This included drivers who were definitely open to switching drive technologies – as Stefanie Zieglmeier is now.

“The lighting effects are incredible”

Alexander Lichtblau, who works in time management, had a similar experience during his multiday test drive. The Audi employee from Ingolstadt was already a big fan of the Q4 40 e-tron’s design before even pressing the start button. He described the lighting effects as “incredible.” Once he started the car, he was impressed by the direct acceleration typical of an EV: “The electric drive system with 150 kW of power is so incredibly responsive and spontaneous, it’s just plain fun to drive – whether leisurely through towns or occasionally at top speed on the highway.”

But even he didn’t embark on his journey with an entirely open mind. While Lichtblau wasn’t worried about the range being too short with the 76.6 kWh net capacity of the battery, he didn’t trust the navigation system at first. Or, more precisely, the suggested charging points along the route. Together with his wife, he covered more than 1,200 kilometers in just a few days, charging the Q4 e-tron a number of times in between. While Lichtblau still chose the charging stations himself during the first two days, after that he decided to stop always second-guessing and double-checking. “I learned to trust the car. Especially since the Q4 e-tron suggested exactly the charging points that I would have picked out myself,” said Lichtblau. This is because the car features the e-tron route planner, which shows the route to the next station. The system assists the driver by scheduling the charging sessions in as needed – and always doing so when the next destination is out of range. An intelligent algorithm calculates the fastest route, takes traffic and route data into account, considers the driver’s driving style, calculates how long it will take to charge the vehicle, and includes it in the total driving time.

On his very first trip, Ralph Gossert from quality assurance at the Neckarsulm site took his wife and their three children to see whether e-mobility was suitable for families – and whether the charging infrastructure was sufficient for a long journey. He completely relied on public charging stations during his trips through southern Germany, and was not disappointed. "On the way to Bamberg, Rothenburg ob der Tauber, and Heidelberg, I was able to see firsthand just how far the expansion of the charging infrastructure in Germany has already come,” Gossert recounted. Along the highway, he said, he had no trouble finding charging points. And in rural areas, he found more charging options than he expected. One practical aspect for Audi owners is that users of the e-tron Charging Service can currently choose from around 250,000 charging points in 26 European countries, including more than 5,850 HPC fast-charging points. In fact, there are now almost 48,000 charging points available in Germany alone. On the Transit plan, Q4 e-tron buyers do not have to pay a monthly fee for the entire first year. In addition, they benefit from preferential terms within the IONITY network – charging costs only 31 cents per kilowatt-hour, which is roughly equivalent to the cost of charging at home in Germany.

Overall, quality expert Ralph Gossert rated the Audi Q4 e-tron very highly. He was particularly surprised by the ride comfort, especially at high speeds. “The interior of the Q4 e-tron is so quiet that you can carry on a normal conversation, even on the highway,” he noted. The car’s ease of operation was another highlight for Gossert. “The way the Q4 e-tron was configured, all I had to do was get in, buckle up, press the accelerator and the brake pedals, and steer. It was extremely comfortable to drive, even over long distances.” The vehicle’s suitability as a family car and for everyday use is what impressed him the most, however.

Enough space for the baby gear

Although Christian Blaich from employee IT in Ingolstadt is a fan of e-mobility, he too initially had reservations about the Q4 e-tron’s suitability for families. Together with his partner and their young son, who is only a few months old, Blaich set off to test the car on a long weekend. Along for the ride were a stroller, baby seat, and a complete set of baby supplies. It quickly becamee clear that their luggage and baby gear easily fit in the trunk, the baby seat is quick and easy to install, and the whole family has plenty of room inside. “My girlfriend told me she’s never been in a car with so much legroom,” he said.

After the test drive, Blaich is convinced that the range anxiety of some EV skeptics is unfounded. “You have to plan your routes out a bit in advance,” he said, and added, “we took advantage of the charging time to take care of things we needed to do anyway – like breastfeed and change diapers. Or to strike up a conversation with other EV drivers.” His conclusion after four days of intensively testing the electric car: “I can easily imagine that our next car will be a Q4 e-tron.”

Audi invests in its employees

In the process of transitioning to e-mobility, the company is ensuring that its employees are also on board, offering emotional driving experiences to complement in-depth advanced training opportunities. Audi employees are scheduled to take around 700 test drives of the Q4 e-tron in Ingolstadt and Neckarsulm at the end of September. Several thousand employees already test-drove the very first all-electric Audi, the Audi e-tron, back in 2019 during a special test-drive event. As part of a large-scale training initiative, Audi will be investing around half a billion euros in the training and development of its employees in the forward-looking fields of digitalization and e-mobility by 2025.