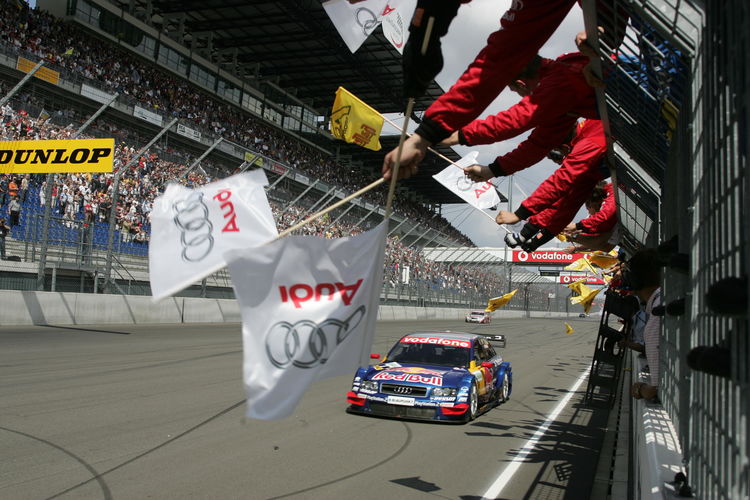 Mattias Ekström has clinched the DTM lead for Audi at the EuroSpeedway. A crowd of 74,000 got to see a highly spectacular touring car race, with the Swedish driver engaged in a thrilling fight against the competition. Right in the first turn after the start, Ekström’s Audi A4 DTM fielded by Audi Sport Team Abt Sportsline overtook Christijan Albers, who has been leading the drivers’ standings so far, on the outside line. Despite the Dutchman’s vehement attack in the final stage of the race, the Audi driver successfully defended his position, now equalling Albers’ place at the top of the standings. Ekström and Albers had crossed the finish line in second and third positions respectively but both of them moved up one place when the winner was excluded.

Emanuele Pirro, despite running a temperature and being involved in a collision right at the start that threw him back all the way to the rear of the field, finished sixth, thus scoring three more points for Audi Sport Infineon Team Joest. Christian Abt, Tom Kristensen, Frank Biela and Martin Tomczyk finished 9th, 10th, 12th and 14th respectively. Kristensen received a drive-through penalty after a mechanic had gotten his hand caught while lowering the car on the grid, and the A4 had to be lifted once more. Martin Tomczyk’s impressive fight from the rear to the front of the field – having started from position 21 he had fought his way up to 12th place right in the first lap and was ultimately seventh – was not rewarded either, as a rival pushed him into a spin shortly before the end of the race.

Mattias Ekström (Audi Sport Team Abt / Audi A4 DTM #5)
1st
“When I spotted Christijan Albers and Bernd Schneider in my rear-view mirror, I knew that I’d have to fight hard to keep my second place. The duels with Albers were tough but fair – we’ve exchanged lots of blue and silver paint. In the DTM, every millimetre counts. If you want to be at the very front of the field, you have to drive hard and right at the limit. I think we put on a spectacular show for the audience today – even though this may have put quite a strain on the nerves of my pit crew. To be fair, I have to say that today Gary Paffett won on the race track. But obviously his team made a mistake.“

Emanuele Pirro (Audi Sport Infineon Team Joest / Audi A4 DTM #44)
6th, + 28.625s
“I’m very happy about my result, because before the start I wasn’t sure if I’d be able to stick it out. I’ve been running a temperature and have had to take medication. The race was tough and, what’s more, it started badly, as I was flung around right in the first corner. But then I found a good rhythm and was able to catch up one place after the other. The Joest Team did a super job. We’ve taken another step forward.“

Christian Abt (Audi Sport Team Abt Sportsline / Audi A4 DTM #11)
9th, + 41.665s
“My car was very good, especially while cornering. On the straights, though, I was lacking a bit of speed, that’s something we’ll have to work on. For me it was important today to finish the race, and I managed to do this. Even points might have been in it for me, if I hadn’t stalled the engine during my first pit stop. I feel sorry for my team, because the pit stop was really quick – and I would have overtaken several cars at once. Still, I’m not unhappy. Now, we’ll be getting ready for the Norisring, my favourite circuit.“

Tom Kristensen (Audi Sport Team Abt Sportsline / Audi A4 DTM #12)
10th, + 41.976s
“If you start from 18th place and are given a drive-though penalty on top, you can’t expect a better result than this. My A4 was very good, and I would’ve liked to score the points for Audi and the team they certainly deserved today. Without the drive-through penalty, which I find rather difficult to understand, I’d have easily scored points. Yet, I have no choice but to accept this penalty.”

Frank Biela (Audi Sport Infineon Team Joest / Audi A4 DTM #45)
12th, + 48.656s
“At least, I finished the race. The car was pretty good to drive, I was able to keep up with the pace of the cars in front of me. Overtaking, though, is a completely different matter, particularly considering that there’s still a certain lack of performance. I lost a few positions when I stalled the engine during the second pit stop. That was unfortunate, of course.”

Martin Tomczyk (Audi Sport Team Abt / Audi A4 DTM #6)
14th place, + 1m 07.612s
“Today, my capabilities were obvious to everyone. Moving up from position 21 on the grid to twelvth place in the first lap was simply a dream. Though I lost a bit of time during my first pit stop, this wouldn’t have kept me from finishing in seventh place. Unfortunately, some of the drivers do not always display the level of fairness they should.“

Hans-Jürgen Abt (Team Director Audi Sport Team Abt Sportsline): “Mattias’ race today was another top performance. He got every bit out of the Audi that was possible today. We knew that the characteristics of the EuroSpeedway would make today’s race difficult. Nevertheless, we might have even won the race. Most importantly, though, is the fact that we came on as a very strong contender for the Championship.“

Ralf Jüttner (Technical Director Audi Sport Infineon Team Joest): “I’m delighted that we put on such a solid performance following the difficult weekend at Adria. Emanuele was pushed into a spin at the start, causing him to fall back to the very end of the field and, despite running a temperature, he managed to score points – that was a fantastic exploit. Congratulations to Emanuele, and my thanks to the whole team. The pit stops were good, and the strategy was right. Today’s performance gives us additional motivation for the Norisring.“

Dr Wolfgang Ullrich (Head of Audi Motorsport): “Today’s race speaks for itself: this was motorsport at its best. Mattias managed to sustain a tough but fair fight all the way to the end against three competitors, whose cars were somewhat quicker on the straights today. Mattias has worked hard for and deserves to lead the standings. Obviously it was not so nice what happened after the race. However, we also got already to feel this year how straight forward the rules are implemented in DTM. This was also the case with today’s penalty against Tom Kristensen. He as well had not gained any advantage. Despite all of that it is needless to say, the fact that we’re going to the Norisring as the DTM leaders is simply fantastic, and we’ll give our level best to ensure that Mattias won’t start to feel lonely at the top of the field.“