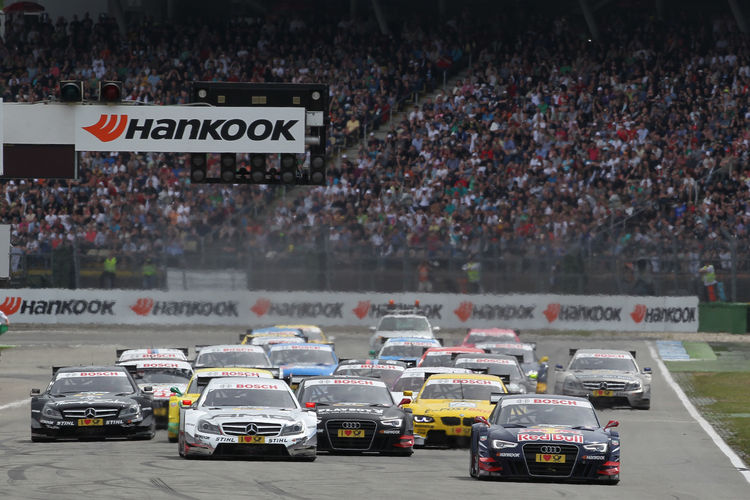 English week in the DTM: Only seven days after the brilliant season opener at the Hockenheimring the most popular international touring car series is visiting the Lausitzring, 130 kilometers south of Berlin. Audi is traveling to East Germany as the title defender and last year’s winner.

The beginning of the new DTM era last weekend sparked the desire for more. The prestige competition between the three German premium manufacturers Audi, BMW and Mercedes-Benz with their spectacular coupes is promising to become a real hit. 142,000 spectators witnessed the premiere at the Hockenheimring, 1.28 million watched the live ARD broadcast which offered variety galore: fierce duels, collisions and three brands battling each other on an equal footing.

Title defender Audi with the new A5 DTM clinched the first pole position in the new DTM era and a podium result on race day with the two-time DTM Champion Mattias Ekström. The Swede calls the Lausitzring one of the tracks he is most familiar with and on which he has won as many as two DTM races: in 2004, the debut year of the A4 DTM, and a year later after a memorable duel with Hockenheim winner Gary Paffett.

Audi is not only arriving as the title defender at Lausitz but also as last year’s winner. In 2011, Martin Tomczyk and Timo Scheider gave the brand with the four rings a one-two victory at the Lausitzring. For Tomczyk, this marked an important step toward the champion’s title. The squad led by Head of Audi Motorsport Dr. Wolfgang Ullrich is aiming to continue this success on the first weekend in May.

After the Hockenheim season opener, the teams have only a short time to prepare the cars for the race at the Lausitzring. A large part of the squad is traveling from Hockenheim directly to Lausitz on Tuesday. The first free practice session on Friday will mainly be about working out an optimal set-up based on the wealth of data gathered at Hockenheim for the race on Sunday that starts at 2 p.m. – presumably in front of a similarly impressive crowd as last Sunday.

As usual, ARD will broadcast the qualifying session and the race live on “Das Erste.” Tickets for all DTM races are available at the Audi Ticket Shop on the internet at www.audi.de/dtm.

Dr. Wolfgang Ullrich (Head of Audi Motorsport): “The Lausitzring has completely different characteristics than the Hockenheimring, so the cards will be reshuffled. We’ve got to find out now why we weren’t able to put our strong qualifying performance on track in the race at Hockenheim. We’re going to work on that in the next few days in order to further improve our competitiveness at the Lausitzring on Sunday.”

Hans-Jürgen Abt (Team Director Audi Sport Team Abt Sportsline): “The race at the Lausitzring is a very special one for us, as we’ve only got three days for preparing the cars. To top it off, we were the victims of several attacks at Hockenheim and have now got a lot of repair work to do. But the whole squad is highly motivated. We’re traveling to the next race as the best Audi team and with Mattias ranking in third place of the standings. We’re going to do everything we can to strike back as quickly as possible.”

Ernst Moser (Team Director Audi Sport Team Phoenix): “There’s just enough time to take one deep breath, analyze performance and check the cars from A to Z. Ever since our victory last year, the Lausitzring has been one of our favorite tracks. Now we’re going to attack with Rocky (Mike Rockenfeller) and Miguel (Molina).”

Arno Zensen (Team Director Audi Sport Team Rosberg): “We were running well at Hockenheim in practice, qualifying and in the race but had some problems with our pit stops. We identified these issues and are going to work on them during the short time that’s left before the next race. That’s why I’m confident that we’ll be able to continue our past successes there.”


Facts and quotes by the Audi drivers

Filipe Albuquerque (26/P), TV Movie Audi A5 DTM #22 (Audi Sport Team Rosberg)
• Scored his first DTM point last year at Lausitz
• Pushed forward into the points at Hockenheim from grid position 14
“I really like the Lausitzring. I handle the track well and scored my first points there. At Hockenheim, the whole squad and I learned a lot about our new Audi A5 DTM. I’m optimistic for the next race and want to finish in the points again. At Hockenheim, we saw that we’ve got the potential for top positions.”

Mattias Ekström (33/S), Red Bull Audi A5 DTM #3 (Audi Sport Team Abt Sportsline)
• Has won twice before at the Lausitzring
• Clinched the first pole position and the first podium result of the new Audi A5 DTM at Hockenheim
“There’s no other race track in Germany that I’ve spent more time at than at the Lausitzring. So, I know the circuit inside and out. I have a lot of respect for the competition and know that we need to improve in the race. So, let’s grab the bull by the horns and try and change tack.”

Rahel Frey (26/CH), E-POSTBRIEF Audi A5 DTM #17 (Audi Sport Team Abt)
• Celebrated her debut with Audi Sport Team Abt at Hockenheim
• Lost 13th place shortly before race end due to spinning
“The Lausitzring is not exactly regarded as an Audi track. So, I’m particularly motivated to change this.”

Miguel Molina (23/E), Red Bull Audi A5 DTM #10 (Audi Sport Team Phoenix)
• Scored two points at Hockenheim in his first race for Audi Sport Team Phoenix
• Pushed forward to ninth place after starting from P17 at Hockenheim
“In the past few years we were often struggling at the Lausitzring but we’re traveling there with confidence nonetheless. We’re going to work hard on further improving the good race pace we showed after a fair to middling qualifying session at Hockenheim and to further improve our understanding of the car.”

Edoardo Mortara (25/I/F), Playboy Audi A5 DTM #21 (Audi Sport Team Rosberg)
• Started from the second row of the grid on the Audi A5 DTM’s debut
• Lost the chance for a top-five result at Hockenheim due to a drive-through penalty
“At Hockenheim, we showed that we’re among the front runners in the field but were slowed by a few problems. We’re going to resolve these before the next race and I’m very optimistic that we’ll be in contention again in the top five at Lausitz.”

Mike Rockenfeller (28/D), Schaeffler Audi A5 DTM #9 (Audi Sport Team Phoenix)
• Had to skip the race at the Lausitzring in 2011
• Barely missed Q4 at Hockenheim
“In view of this short break it’s important that my car came out of Hockenheim undamaged. So, we can concentrate on analyzing all the data and on perfectly preparing ourselves. Last year, I was forced to skip Lausitz due to my Le Mans accident. Now I want to return successfully.”

Timo Scheider (33/D), AUTO TEST Audi A5 DTM #4 (Audi Sport Team Abt Sportsline)
• Was struck by major misfortune at the Hockenheim season opener
• Advanced from ninth to second place at Lausitz in 2011
“In 2011, I had a thrilling weekend at the Lausitzring. I only started from P9 on the grid but had a fantastic set-up in the car and advanced to second place with it. So, a podium finish is again my goal this year. But we know that this’ll be hard work.”

Adrien Tambay (F/21), Audi ultra A5 DTM #18 (Audi Sport Team Abt)
• Made his DTM debut at Hockenheim under the eyes of his father Patrick Tambay
• At the age of 21, is the youngest Audi DTM driver
“I’m happy to be sitting in the car again as early as next week since I didn’t even have the chance to work up a sweat at Hockenheim due to my early retirement. We know what we’ve got to work on to improve our speed. And that’s what we’re going to do.”

All Lausitzring winners since 2001

Victory at the Lausitzring! Audi had to wait for this headline for six years. In 2011, the time had finally come. In front of 63,000 spectators (throughout the weekend) Martin Tomczyk and Timo Scheider clinched a one-two Audi victory. With his second consecutive win Martin Tomczyk took the lead of the DTM standings as well. Timo Scheider perfected the triumph of the Audi A4 DTM by finishing as the runner-up.

Timo Scheider about the Lausitzring: “On this track you need a vehicle with good technical and aerodynamic functionality because the Lausitzring has fast and slow corners. Turn 1 offers particularly good opportunities for overtaking. You’ve got to take advantage of the slipstream after the long straight. Another opportunity exists in turn 5 as you’re entering the short circuit version. The track there is wide and you have a lot of room. The smooth tarmac that offers only little grip is typical for the Lausitzring. I like this modern facility. Especially when you leave the pits for the first time the setting with the high stands is very impressive. The stands by the way are perfect for the fans too, as the spectators practically have a view of the entire circuit.”