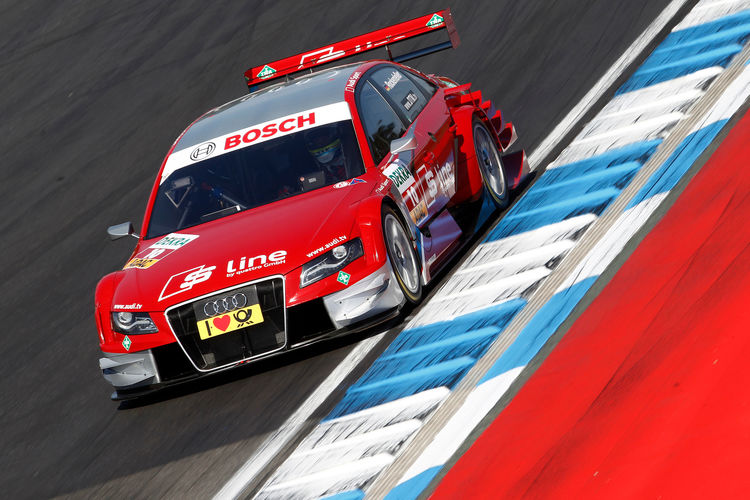 The 2010 DTM season opener at the Hockenheimring did not go according to plan for title defender Audi: several punctures and a tactical error deprived the brand from Ingolstadt of a possible victory. In the end, Audi had to settle for places five to eight after three consecutive triumphs.

78,000 spectators (throughout the weekend) witnessed a turbulent start into the season that saw the first laps in particular being marked by extremely tough battles for positions and at which, in the end, the tires played a crucial part.

Martin Tomczyk was struck particularly hard: the driver from Rosenheim (Bavaria) who lives in Switzerland was leading the race up to the tenth lap before the left rear tire of his Audi A4 DTM blew on the start-finish straight. As a result of the incident, Tomczyk lost ground without a chance of recovering before he was taken out of the race by his team after suffering another puncture.

After the left rear tire of Frenchman Alexandre Prémat, who was running in second place, blew as well, all Audi drivers were instructed to take it easy on their tires and to be more careful when driving over kerbs.

Nevertheless, Mattias Ekström in particular would have had chances of clinching victory. The Swede was running directly behind the subsequent winner Gary Paffett. However, because his team had called him into the pits for his first mandatory stop one lap too early, he had to pit a third time just before race end. As a result, the Swede dropped to sixth place.

“That was a frustrating error,” commented Head of Audi Motorsport Dr. Wolfgang Ullrich. ”But this is not meant to be an excuse for the fact that we got slapped here. The tires we took off of Matthias’ car after the second pit stop probably wouldn’t have lasted another two laps. We simply didn’t get the tires to work on our cars so that they wouldn’t be damaged. We’ve got to deal with this problem, solve it by the next race at Valencia and do a better job there. Today showed that our cars are fast – and we also saw that we’ve got a very homogeneous team of drivers.”

The best Audi driver at the Hockenheimring was Mike Rockenfeller who in his first race for Audi Sport Team Phoenix took fifth place after a race dominated by battles. “I had a fantastic start but lost a lot of positions after body contact with Paul Di Resta – that was too bad. Afterwards, everything went really well. The team did a great job and had a good strategy. I had a tough duel with Timo (Scheider) and I am happy with my performance.”

Another driver who had good reason to be pleased was Miguel Molina. In his first DTM race, the 21-year-old Spaniard crossed the finish line in eighth place just barely behind title defender Timo Scheider and thus clinched his first DTM point right away, clearly outperforming the other two DTM newcomers – David Coulthard and CongFu Cheng.

After his puncture, Alexandre Prémat pushed and managed to recover to tenth place. Katherine Legge and Markus Winkelhock occupied positions 14 and 15, with Winkelhock subsequently being relegated from ninth to 15th place because he had been called in to the pits too early as well and received a 60-second penalty.

Oliver Jarvis’ first race for Audi Sport Team Abt Sportsline was over as early as on the second lap: the Briton was brushed by Maro Engel in the hairpin and had to park his Audi A4 DTM with a damaged right front suspension.