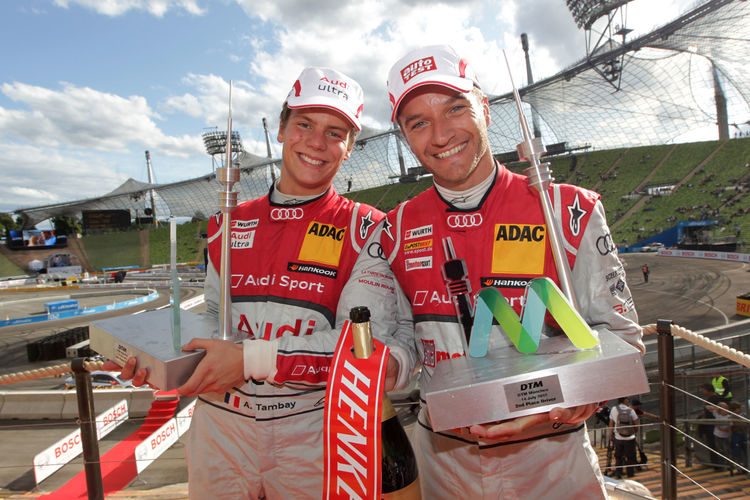 Audi driver Adrien Tambay was the big surprise on the first day of the DTM event in Munich. Together with experienced DTM campaigner Timo Scheider, who came back with an impressive showing after a difficult first half of the season, the 21-year-old DTM rookie reached the final of the manufacturers’ team relay at the Olympic Stadium and was thus on the podium for the first time in the DTM.

After twelve thrilling final laps during which four times three laps were alternately driven, the two drivers of Audi Sport Team Abt Sportsline had to admit defeat to the two Mercedes drivers Jamie Green and Ralf Schumacher by merely 0.254 seconds. By setting the fastest race lap in the final stint, Tambay at the wheel of his Audi ultra A5 DTM in the end even caused a true photo finish.

On the parallel track with a mere length of 614 meters at the Olympic Stadium tires played the crucial part on Saturday. As only two sets of tires are permitted per vehicle throughout the weekend in Munich all Audi racers competed on used tires in the quarter-final so that each of them would have a fresh set available for the prestigious single race on Sunday.

Adrien Tambay and Timo Scheider prevailed in their quarter-final against the BMW of Augusto Farfus and Bruno Spengler. Mattias Ekström and Miguel Molina in their two Red Bull Audi A5 DTM cars on the other hand had to give in to the subsequent winners, Jamie Green and Ralf Schumacher.

Yet the birthday child, Ekström, suggested that he is a very hot candidate for victory in Sunday’s single competition nonetheless as the Swede was by far the quickest driver across five laps in qualifying. Adrien Tambay, Timo Scheider (AUTO TEST Audi A5 DTM) and Miguel Molina qualified for the quarter-final as well.

Exactly as quick – down to a thousandth of a second – as his team-mate in Audi Sport Team Phoenix was Mike Rockenfeller in the Schaeffler Audi A5 DTM. The 2010 Le Mans winner posted his time later than Molina, though, and was thus classified in fifth place. The Swiss Rahel Frey (E-POSTBRIEF Audi A5 DTM) managed to insert herself between the two drivers of Audi Sport Team Rosberg. Edoardo Mortara (Playboy Audi A5 DTM) and Filipe Albuquerque (TV Movie Audi A5 DTM) occupied positions six and eight within the Audi group.

The fastest lap at Munich’s Olympic Stadium was credited to Edoardo Mortara nonetheless. In Friday’s free practice, the Italian who lives in Switzerland posted a time of 26.757s that was not matched on Saturday. The Spielberg winner as one of the Audi drivers with the highest points score in the current DTM season is placed directly for the single competition on Sunday (starting at 14:15 – local time – live on “Das Erste”) for the eighth-final as are Mattias Ekström and Mike Rockenfeller.

Quotes after the manufacturers’ team relay

Dr. Wolfgang Ullrich (Head of Audi Motorsport): “That was no doubt a great spectacle for the crowd today with a very close decision. The combination of the two-time DTM Champion Timo (Scheider) and Adrien Tambay, who is contesting his first DTM season this year, was definitely a very interesting pairing. Both set very good times – including the quickest single lap in the final. But in the end the total time is the only thing that counts, and in that respect Mercedes was a tiny bit faster. Simply everything has got to fit together if you want to win here. The final very clearly showed that you can lose crucial tenths even when driving out of the pits. Now we’re looking forward to the single event tomorrow that’ll probably be just as thrilling. And of course we want to be running in front then.”

Timo Scheider (AUTO TEST Audi A5 DTM), final
“Despite the fact that this is a show event it was a heartbeat final. It’s nice that Adrian (Tambay) and I made it into the final. This morning, we couldn’t even imagine that. But the guys did a superb job and improved a few nuances on the car. The final was much closer than we’d expected. We can be pleased with this day.”

Adrien Tambay (Audi ultra A5 DTM), final
“I was fighting for the lead on each lap, it was always very close. In the final, we came very close to victory. On the last lap I gave everything, it was the best lap time in the final and in the end we were just barely behind (Jamie) Green. It’s nice to be standing on the podium here together with Timo (Scheider). I really enjoyed this.”