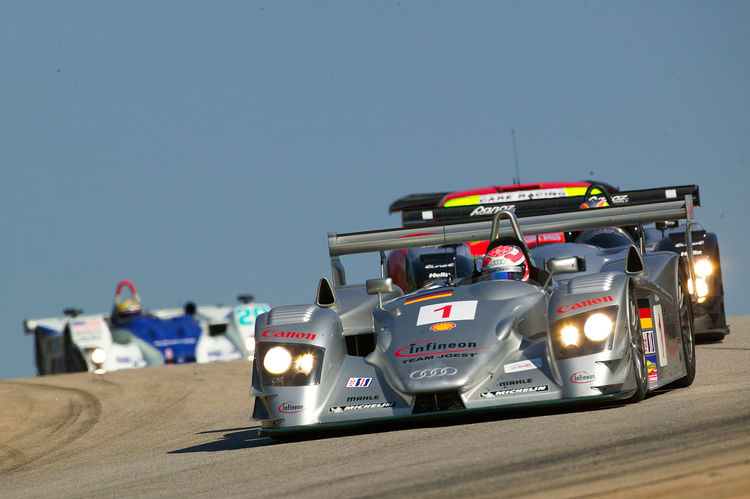 Johnny Herbert’s and JJ Lehto’s drive to glory at the ALMS finale was impressive: Starting third on the grid, Lehto took the lead on lap one, the Finn and his British team mate easily defending the lead during the entire 394 laps. At the finish, they had won by a record eight laps in front of the second place Panoz. Apart from an empty battery and changing a damaged nose twice, the the two former Formula One drivers enjoyed 9 1/2 absolutely trouble-free hours. “We were able to relax and take no risks,” enthused Johnny Herbert after the race.

This was also made possible by Frank Biela’s accident in the Infineon Team Joest Audi R8. The three-time Le Mans winner was pushed off the track when lapping a slower car in the second hour of the race, crashing into a concrete wall with the side of his car at a high speed. “The contact with the wall was heavy,” explained Biela. “I was sure that I would not make it back to the pits. Luckily, I was able to bring the car back and the boys were able to repair it.”

It took Team Joest less than eleven minutes to fix the badly damaged Audi R8. Ten laps down, Biela and Marco Werner rejoined the race at the back of the field. The two Germans had already made their way back to third when Marco Werner slid into the gravel at the beginning of the 8th hour – exactly in the lap the team needed to reach the minimum distance of 700 miles to clinch the title. “Two cars in front of me slowed down so much that I lost the car under braking,” said Werner. “I learned only later that it happened exactly in the last lap we needed for the title.”

After a few anxious minutes, the Audi R8 was towed out of the gravel, allowing Marco Werner to continue the race and seal the title. At the finish, Werner and Biela had again forced their way back to third, finishing all nine races of the season on the podium. “Today we have seen how difficult it is to win a race or a championship,” said Frank Biela. “Things can happen and go wrong so easily. I am so happy we won the title.“

“Frank and Marco can be proud of a great season,” explained Head of Audi Sport, Dr Wolfgang Ullrich. “That Marco has won the title being a newcomer, is certainly something special – also the fact that Team Joest has clinched the Teams’ and Drivers’ titles for the fourth consecutive time. This is impressive.”