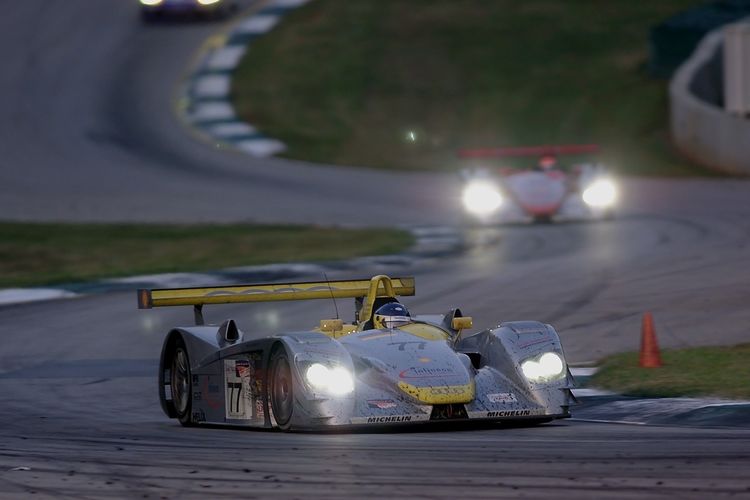 With a dramatic finish at the “Petit Le Mans“, round nine of the American Le Mans-Series (ALMS), Audi took its fourth 1-2 victory of the season. The Audi R8 of Michele Alboreto, Rinaldo Capello and Allan McNish clearly won the 1000 mile race at Road Atlanta. Team mates Frank Biela, Tom Kristensen and Emanuele Pirro in the companion R8 had to fight hard until the very last corner of a total of 394 laps: After a collision with the Panoz halfway through the race the diffusor of the number 78 car was damaged. Nevertheless the Audi trio with their ill handling car defended a margin of just five tenths of a second to the leading Panoz to the finish line.

After his fourth victory in this ALMS season Scotsman Allan McNish took over the lead in the drivers championship, at the same time Audi increases its lead in the manufacturers championship to 21 points. The victory at “Petit Le Mans” also gives Audi 1-2 finishes at the three major long distance races at Sebring and Road Atlanta and a triple triumph at Le Mans.

60,000 spectators at Road Atlanta witnessed an exciting battle for the lead which was defended by pole-sitter Allan McNish first. He only dropped back for a short time during pit stops. The companion Audi R8 experienced a difficult beginning of the race: A stop-and-go-penalty and the change of the front body work cost valuable time.

Nevertheless Emanuele Pirro, Frank Biela and Tom Kristensen fought their way back to their team mates and took over the lead after five hours of racing. But things changed again a few minutes later when a Panoz, which was a few laps down, tangled with the number 78 car of Tom Kristensen who had to finish the race without the diffusor. Although this severly affected the handling of the car the trio was able to do competitive lap times and complete the Audi triumph with a second place.

Michele Alboreto (#77): “I am very glad that we have won this race. It was very important for me to score at least one win with this car because I worked so hard on this project. Today it was easy to make a mistake, because the competition was very tough. I was a little bit scared, because after so many months without racing it is difficult to come back. But I think I did a good job.”

Rinaldo Capello (#77): “In my first stint I had some problems, but the second stint was fine. In the end I had only to keep the car on the track and concentrate. It was a very difficult race, because on this track it is extremely hard to pass, especially during the night. You can hit oil without seeing it. We have seen very good drivers make stupid mistakes, this we had to avoid.”

Allan McNish (#77): “We have won another race, another 1-2 for Audi. It was a very long and hard one and it was one that kept everyone biting their nails right until the checkered flag dropped after nine hours of racing. But that´s what makes the American Le Mans Series so special.”

Frank Biela (#78): “During the last two laps I only saw the bright headlights of the Panoz in my rear view mirror. So I simply had no time to think. In the last lap I had to pass three back markers – I got one on the straight and had to pass the other two in the chicane. After that was done I was sure we would make it.”

Tom Kristensen (#78): “I enjoyed this race very much, especially since I´m only driving with the team for three races. It was a great fight to bring the car back into the lead after all the problems we had at the beginning. That was the result of a great team effort and very good strategy. The incident with Jan and me was just racing, we both think it was very unfortunate because it made the race quite difficult for both of us. Finishing second today is like a victory.”

Emanuele Pirro (#78): “We lost a little bit at the beginning. Then we got our lap back and I was starting to believe that we could do well, but then we had bad luck with the Panoz. When we lost the rear diffusor it was only important to finish the race. The balance of the car was not bad, but it was very light and more difficult to drive than normal. I think we finished the race in the best possible way. “

Dr Wolfgang Ullrich, Head of Audi Sport: “We have won all important long distance races this year at least with a 1-2. This is a great achievement and I would like to thank everybody who worked for this result. We had no technical problems, when Jan Magnussen and Tom collided the mounting of the diffusor was damaged and we could not change it. I have great respect for the lap times the drivers did without the diffusor. It was a great team effort.”

Reinhold Joest, Team Director Audi Sport North America: ”I think today not a single person felt bored. We can be very proud to have such a great car and drivers who know how to maximize it perfectly and to behave in an endurance race. Of course the last three laps were really thrilling. But we stayed calm and finally saved second position.”