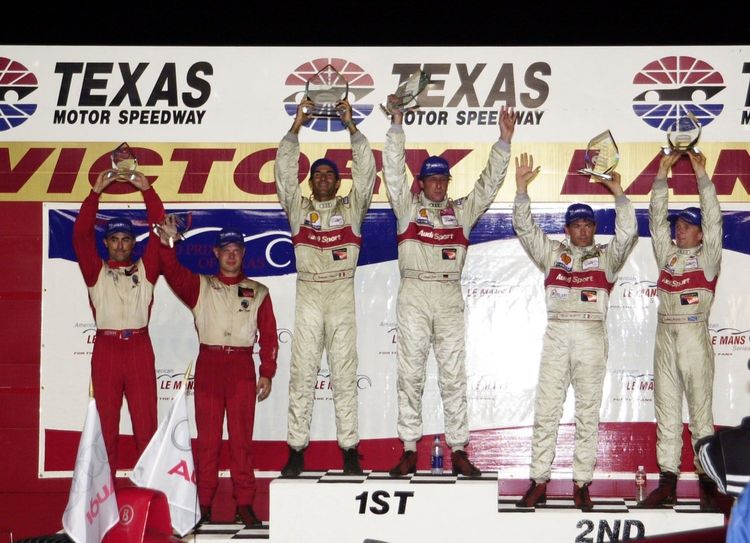 A perfect start for Team Audi Sport North America going into the second half of the American Le Mans Series (ALMS): Under gruelling heat Audi took an unchallenged 1-2 victory at the Texas Motor Speedway in Dallas/Fort Worth. The two Audi R8s led all 127 laps, and lapped the entire field. With the third 1-2 of the season Audi took the lead in the manufacturers championship of the American Le Mans Series. All four Audi pilots further closed the gap in the drivers championship.

Allan McNish and Rinaldo Capello set the pace for most of the 2:45-hour distance, but had to settle for second behind their teammates Frank Biela and Emanuele Pirro when the communication between the pits and Capello´s Audi R8 broke down. While Biela refuelled during the last caution period, Capello had to come in for a late splash-and-dash ten minutes before the end of the race handing victory to Biela/Pirro.

It was the fourth victory for the Audi R8 in the seventh ALMS race of the season and the R8 once again was in a class of its own: The Audi drivers were about one second per lap faster than their competitors. Even before half distance Allan McNish had lapped the whole field apart from his teammate Emanuele Pirro. The fastest race lap of the Scotsman was only 0.2s slower than his pole position time. And by triumphing in Texas, Audi achieved a hattrick: never before any manufacturer had been abtle to win three ALMS races in a row.

Frank Biela (#78): “This was a very good and a very important weekend for us. Both R8s were very close together all the time. We were able to put pressure on our teammates which was not always the case in the last races. Thanks to perfects pit stops the race was perfect for us. We had a great car and this victory is very important for our chances in the championship.”

Emanuele Pirro (#78): “First of all I want to thank the whole crew which has done a great job. Today we were very lucky. We won the race because our team mates had problems with their radio. But this is part of the sport and you have to accept it. Therefore I am happy about the victory. The car was much better with full fuel tanks. With less fuel it started to oversteer on the entrance of the corners.”

Rinaldo Capello (#77): “I am really destroyed. The car was perfect, I had no problems at all, just that the radio stopped working the lap before the last caution period. I got the message that I was five seconds ahead of Frank. When I saw the yellow flags I called the pits but got no answer. Unfortunately it is the only track were we can´t use pit boards for the communication. So it was really bad luck.”

Allan McNish (#77): “I am very happy to have an Audi 1-2 again. We worked very hard, Dindo did an excellent stint. It is just very unfortunate that the race was decided due to a radio problem more than racing itself. The car was very good to drive.”

Dr Wolfgang Ullrich, Head of Audi Sport: “The race went the way we hoped after the practice sessions and qualifying. All the pit stops went perfectly. The decision was made when Dindo´s radio didn´t work anymore, we couldn´t call him in so he had to stop for a splash and go in the closing laps under green. He lost the lead. The race showed that both cars perform very much the same, today a little bit of luck decided the winner.”

Reinhold Joest, Team Director Audi Sport North America: “The most important accomplishment today was the double victory for Audi. The fact that Frank and Emanuele won today makes the competition in our team very interesting again. The problem with the radio was just bad luck. That is life and motorsport. A big compliment to all of the four drivers and our pit crew. Everyone did a perfect job.”