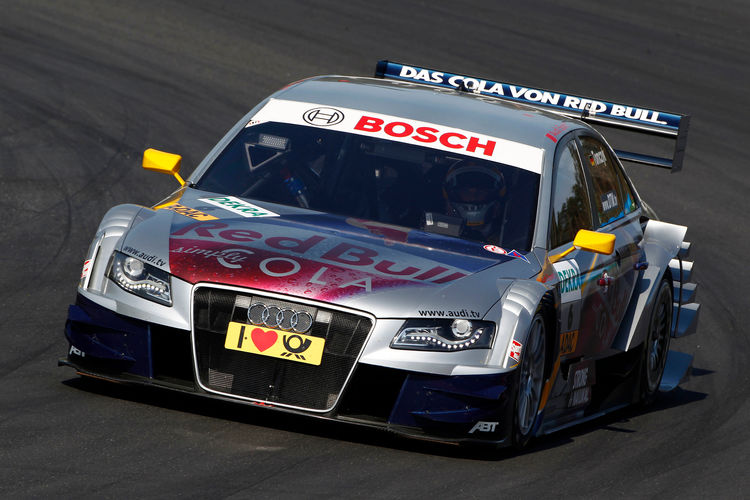 The qualifying session for the first DTM race of the year (Sunday, starting at 1:45 p.m. – local time – live on “Das Erste”) fulfilled the expectations which experts had of the new season: a razor-thin margin of 76 thousandths of a second separated the fastest Audi from the best Mercedes-Benz. The starting grid with five A4 DTM and five C-Class cars on the first five rows is well mixed. And the vehicles of all model years have chances of clinching victory.

The best Audi driver in the battle for the best grid positions at the Hockenheimring on Saturday was Martin Tomczyk. The driver from Rosenheim (Bavaria) who lives in Switzerland and who changed his training program and diet in winter missed the pole position in the crucial fourth qualifying segment (Q4) by merely 0.076 seconds. “Unfortunately, I made two minor mistakes, otherwise the pole position would have been possible,” said the driver from Audi Sport Team Abt Sportsline. “In qualifying I still had some problems using the tires right on the dot. But, except for that, I’m very pleased. The team and Audi did a great job of preparing my car; it was running really well here right from the first lap.”

Mattias Ekström, who won the DTM season opener at Hockenheim twice in the past three years, merely missed making it into Q4 by 79 thousandths of a second. “It was my own fault,” the Swede freely admitted. “I made a mistake on the crucial lap before the hairpin. But, starting from P5, means that anything’s possible in the race. I’ll be fighting for a podium.”

Oliver Jarvis and Mike Rockenfeller will start into the race for their news teams from the fourth row. On his debut with Audi Sport Team Phoenix “Rocky” posted 1m 32.647s in Q2 as the absolutely fastest qualifying lap and thus underlined the fact that the cars of the older generation are competitive in the 2010 season as well. Rockenfeller missed a better grid position when in Q3 another vehicle directly in front him had kicked some dirt onto the track.

The first qualifying session of the year ended in disappointment for title defender Timo Scheider who in ninth place was out as early as in Q2. “I had problems throughout the weekend getting my tires to work on the first lap,” explained Scheider. “This morning it didn’t work, and in qualifying it didn’t either. We’ve got to analyze what it is that my team colleagues did better. I’ll soak up the data. Let’s see what’s possible tomorrow in the race.”

Alexandre Prémat and Markus Winkelhock will start from the sixth row. The Spaniard Miguel Molina in thirteenth place was the best driver among the newcomers in the field. After an accident in practice on Friday, his mechanics had worked until 2 o’clock in the morning to put the 21-year-old driver’s Audi A4 DTM back on its wheels.

Katherine Legge was struggling with shifting problems in free practice and will start from position 18 after an exchange of the transmission.

For Head of Audi Motorsport Dr. Wolfgang Ullrich the way qualifying went came as a no big surprise: “Obviously, we’re always aiming to be as far at the front as possible. We succeeded in making it onto the front row. I’m realistic: our rivals are very strong and got things together a tiny bit better than we did today. That’s why we’re ‘only’ on P2. But that’s really complaining at a high level. It’s nice that Martin (Tomczyk) showed a great performance. I look forward to the race tomorrow."