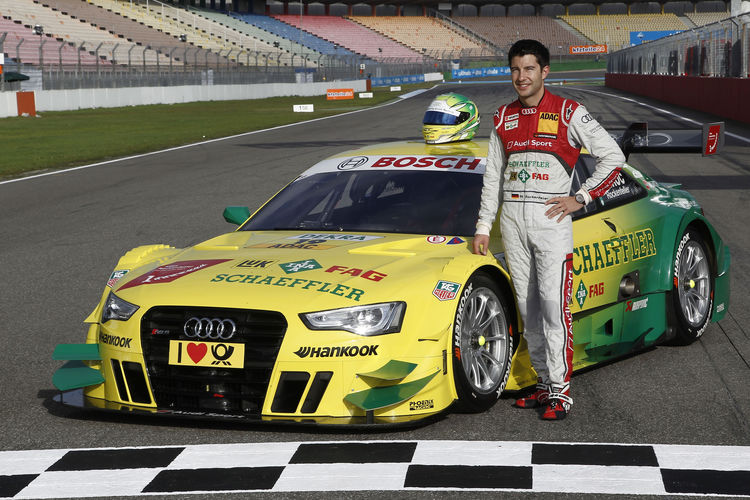 Motorsport fans can look forward to the DTM’s dream team again in 2014. Audi, champion Mike Rockenfeller and sponsor Schaeffler will again form a unit in the coming season. Audi Sport and Schaeffler have now extended the agreement by three years.

With two titles in three years to its credit, the Audi sporting Schaeffler colors has been the most successful car in recent DTM history. In the coming season, Mike Rockenfeller will again be racing in the RS 5 DTM with green-yellow graphics. The only change: As champion, ‘Rocky,’ for the first time in his DTM career, will be competing in car number one when the ‘title defense’ mission begins at the Hockenheim season opener in early May 2014.

“The Schaeffler Audi has become an absolute crowd-pleaser with the DTM fans in recent years and, what’s more, was our best-placed car three times in succession. Therefore, we’re delighted in more ways than one that we’ve been able to conclude a long-term extension of this partnership and that this dream team is retained for the DTM,” says Dieter Gass, Head of DTM at Audi. Head of Audi Motorsport Dr. Wolfgang Ullrich is pleased as well: “Mike (Rockenfeller) has been a valuable and indispensable member of the Audi family for many years. Not only because he’s an experienced and fast race driver but also because he’s a very special person. He’s a perfect fit for us. And considering that he’s only 30 years old, the future belongs to him – both in the DTM and at Le Mans.”

Mike Rockenfeller is happy about the extension of the agreement. “Audi and Schaeffler are simply two fantastic partners,” says the 2013 DTM Champion. “In both companies, motorsport evokes a lot of emotions. I can really feel the enthusiasm of the employees whenever I visit any of the locations. To represent these brands on the race track and to be so successful – that makes me proud.”

For the Schaeffler Group, the partnership with Audi has been nothing but a success story so far. In 2011, Martin Tomczyk celebrated the title; in 2012, Mike Rockenfeller was the best Audi driver and won the Championship a year later. “Schaeffler, Audi and Mike Rockenfeller – this combination is simply a perfect fit,” says Schaeffler Board Member for Development Prof. Dr. Peter Gutzmer, not only referring to the successes achieved on the race track. “Motorsport emotionalizes and unites – particularly in success: Many of our more than 77,000 employees couldn’t relate to this topic a few years ago and, today, are big Audi and DTM fans. We’re delighted that this success story will continue in the next years.”

The new DTM season will start at Hockenheim on May 4, 2014. The ten races will include visits to China and Hungary. In 2013, Mike Rockenfeller won the drivers’ title and his squad, Audi Sport Team Phoenix, the team classification.