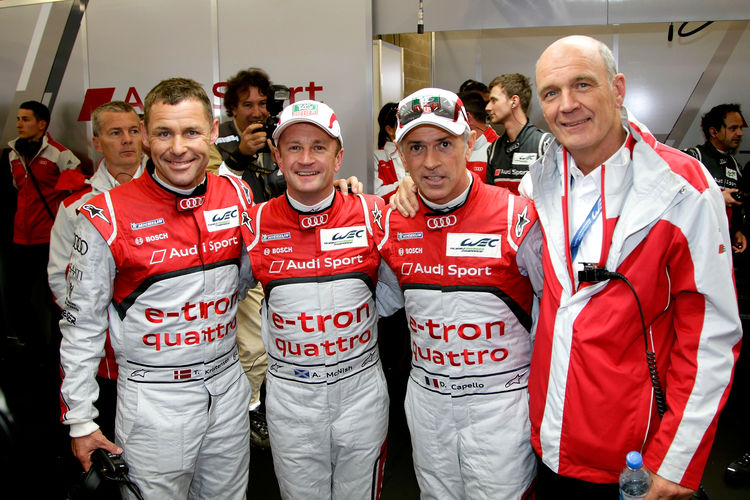 Premiere in endurance racing: Audi is again making technology history in motorsport, as a diesel hybrid vehicle is on the top spot of the grid of a sports car race for the first time ever. At round two of the new FIA World Endurance Championship (WEC) at Spa, Belgium, Audi will be starting into the race on Saturday (14:30, May 5) with four cars from the front two rows.

Even before the start of the Spa 6 Hours Audi has every reason to be pleased, as the team successfully managed a two-fold premiere. Both the new hybrid model Audi R18 e-tron quattro and its sister model, the Audi R18 ultra, that is conventionally powered by a V6 TDI engine celebrated an impeccable debut. The two vehicle models fought an open battle for the grid positions in dry conditions. Allan McNish in the hybrid car designated as number “2” set the pace straight from the beginning. He initially drove a lap around the 7.004-kilometer race track in the Ardennes in 2m 01.967s. The Scotsman then improved his own time by more than three tenths of a second to 2m 01.579s. As on the debut of a TDI diesel engine in a sports car six years ago at Sebring McNish and his team-mates Dindo Capello and Tom Kristensen again set the first benchmark on the next milestone – hybrid technology.

Marco Bonanomi, who like Marc Gené and Oliver Jarvis is making his racing debut in Audi’s sports car squad in Belgium, managed the leap onto the front row as well in the Audi R18 ultra. The Italian handled the challenging track in 2m 02.093s. Marcel Fässler in the second Audi R18 e-tron quattro achieved the third-best time. Loïc Duval, who is driving an Audi R18 ultra, finished in fourth place. For the first time in the 13-year history of Audi’s LMP program, Audi Sport Team Joest is fielding four sports cars. The team based in Germany’s Odenwald region is preparing for the Le Mans 24 Hours on June 16/17 this way. The famous endurance classic will be contested with the same vehicle line-up.

New footage is now available to TV channels for preliminary coverage of the 24-hour race. The rights-free material can be viewed at and downloaded from the Audi Motorsport database at www.audi-motorsport.info.

Dr. Wolfgang Ullrich (Head of Audi Motorsport): “The result is the best way of saying ‘thank you’ to a squad that has been working particularly hard. Although we know that qualifying is certainly not the most important thing in endurance racing I’m hoping that we’ll put our good qualifying performances on track on Saturday again and clinch a good result.”

Dieter Gass (Head of Racing Commitments): “Things couldn’t have gone any better. This is the first fielding of our hybrid car and it ran without any technical problems. The performance in qualifying was right too. It’s no doubt ideal that the Audi R18 e-tron quattro is on position one on its premiere. As far as the weather conditions in the race go, we know that anything is possible at Spa. You can choose between highly different weather forecasts on various websites ... We’ll just have to take it the way it comes.”

Ralf Jüttner (Technical Director Audi Sport Team Joest): “The result is a nice mix between the Audi R18 e-tron quattro and the Audi R18 ultra cars. All the drivers drove tremendous laps. Allan nailed it down very well but Marco was very quick as well. All four cars are battling on an equal footing. We handled the practice and qualifying sessions with relative ease but are still at the beginning of the learning curve as far as the set-up is concerned. But I do believe that we’re really well set. Still, I’m warning against too much optimism. Last year, we were in front with three cars as well and then had problems in the race. And the rain that’s been forecast won’t make matters any easier for us either. It was a very good beginning. ‘Many thanks’ to the team. It had a lot of work in the past few weeks.”

Dindo Capello (Audi R18 e-tron quattro #2): “A brilliant lap by Allan! It’s great to be at the very front again. Many years ago, our driver team managed this on the debut of TDI technology too. Now we’ve achieved the top spot on the grid with the new hybrid technology. This is fantastic and shows that our driver squad can still deliver top performances. Part one of our task has been accomplished, part two will follow on Saturday. We’re the leaders of the standings and want to leave Spa in the same position.”

Tom Kristensen (Audi R18 e-tron quattro #2): “We’re experiencing an interesting week with our new toy. The engineers and the mechanics did a solid job of optimizing this car. Thanks to Allan’s excellent lap we’re starting from P1. That’s a significant result at round two of the world championship. And it’s our preparation for Le Mans. Everyone is perfectly concentrated and the demands are high. A few new members are working in the team. So, Spa is a good opportunity for the team to continue to gel and to show our new technology in public for the first time. Our top priority is to finish with all four cars on Saturday.”

Allan McNish (Audi R18 e-tron quattro #2): “Qualifying felt absolutely thrilling. Our R18 e-tron quattro is making its debut, which is a very special moment for us drivers. Something like this happens only in the case of technological leaps like the introduction of the TDI engine six years ago or the e-tron quattro now, which is the next milestone. It’s great that Dindo, Tom and I are all the way at the front of the grid. The engineers gave us a strong, nicely balanced car in which I drove two good laps.”

Marco Bonanomi (Audi R18 ultra #4): “It was a very good qualifying session. I’m very happy for the team. I’m already excited about tomorrow’s run. This is my first race in a prototype, so it’s great to be able to start from the front row. Unfortunately, I hit traffic on my second fast lap. My first intermediate time was 0.3 seconds faster than my previous best time, so I immediately returned to the pits.”

Oliver Jarvis (Audi R18 ultra #4): "That was a superb qualifying event. Marco did a fantastic job. On his second lap he hit traffic otherwise he could have even been quicker. We’re very pleased with the weekend so far. But what really counts is the race tomorrow.”

Marcel Fässler (Audi R18 e-tron quattro #1): “First of all, I’d like to say ‘well done’ to Allan and his crew on clinching pole. He drove a brilliant lap. I’m personally a bit disappointed, as I was quicker in free practice this morning than in qualifying. I was a bit too slow on my warm-up lap because I tried to stay clear of traffic. My fast lap was okay but not totally without mistakes either. Position three on the grid is a good starting base for the race.”

André Lotterer (Audi R18 e-tron quattro #1): “This was a tremendous qualifying session for Audi with the top four positions. It’s fantastic that the best time was immediately achieved with the new hybrid technology. Unfortunately, we fell a little short with our car, but third place is a good starting base for the race. Since Marcel had been the quickest in free practice we’ve got to analyze why qualifying no longer went so well. Perhaps we changed the car in a way that it no longer fit Marcel as well anymore.”

Benoît Tréluyer (Audi R18 e-tron quattro #1): “We were in front in all sessions up to qualifying. But there we didn’t get it right on the dot. That’s not tragic, though, because the race is long and the car is running well. We went out later than the others. That may have influenced the result. We were only short of a few tenths. Now we’re going to set up the car for the race.”

Romain Dumas (Audi R18 ultra #3): “This was not an easy qualifying session. Every driver had only two fast laps. In addition, we changed the set-up once more before qualifying. Unfortunately, we got stuck in traffic. Fortunately, we gathered a lot of important data that will allow us to further improve the car for the race. For tomorrow, rain has been predicted. That’s why qualifying today was not crucial.”

Loïc Duval (Audi R18 ultra #3): “Qualifying was quite alright; unfortunately, though, I was slowed by traffic on both laps. So, I could have driven even faster, but sometimes you’re lucky and sometimes you’re not. But we did achieve our aim of Audi starting from the top four positions on the grid.”

Marc Gené (Audi R18 ultra #3): “Loïc unfortunately had traffic on his fast laps, so he wasn’t able to fully exploit the car’s potential. Aside from this, the weekend’s going really well. I’m getting more and more used to the car on this fantastic track. The race is very long and a lot can happen. I’m hoping for us to clinch a podium result.”