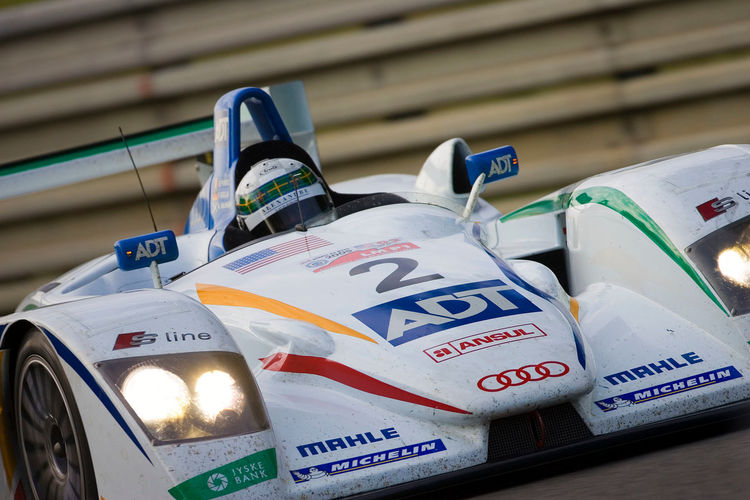 Despite the handicaps imposed by the regulations, the Audi R8 makes a good impression in its sixth and last start at the Le Mans 24 Hours. Audi factory driver Allan McNish (Team ADT Champion Racing) set the third-fastest time shortly after 10 p.m. in Thursday’s final qualifying session. Thus, the best-placed R8 will start the race on Saturday from the second row of the grid. Formula 1 test driver Franck Montagny secured Audi PlayStation Team ORECA the fifth spot on the grid at their first Le Mans entry with an Audi. The second “American” R8 will start the race from the fourth row.

Rain showers on Wednesday meant that the starting positions for the 73rd edition of the French Endurance classic were decided in the final qualifying session on Thursday evening. Although all three Audi R8 sports cars were already fitted with the engines for the race, Allan McNish lost just 3.080 seconds to pole position on the 13.650 kilometres – much less than expected. During the pre-test session a fortnight ago, the fastest sports cars of the new generation, which the regulations allow a significant power-advantage, had been almost six seconds faster.

Because they did not see any chance to secure a place on the front-row of the grid due to the handicaps, the Audi teams during qualifying completely concentrated on the setup for the race which will start on Saturday at 4 p.m. After an impressive crowd attended the qualifying, organisers expect a record-crowd over the weekend. The Audi teams must prepare themselves for a similar heat battle as in 2002: For Saturday and Sunday, temperatures around 30 degrees Celsius are predicted for the Sarthe area. Eurosport TV covers almost ten hours live coverage from Le Mans.

Frank Biela (Team ADT Champion Racing Audi R8 #2): “For us the qualifying was much better than we had expected. We knew from the very beginning that we wouldn’t start from pole position. So third place is a great achievement. This evening we also made some changes to the race set-up and are now sorted very well.”

Allan McNish (Team ADT Champion Racing Audi R8 #2): “Getting third place on the grid is a bonus – I honestly didn’t expect to be that high up the grid taking in to account the weight ballast and power restrictions. Critically we’re ahead of some cars that, if we’d started behind them, could have compromised the early stages of the race for us.”

Emanuele Pirro (Team ADT Champion Racing Audi R8 #2): “We have a fast but importantly, a comfortable and easy car to drive for a 24 Hour race – it is early days, but I’m very happy. Allan did a great job to get third – it gives us real confidence – but more importantly we’re looking in very good shape in race trim.”

JJ Lehto (Team ADT Champion Racing Audi R8 #3): “We didn’t really attempt a qualifying run but we’re not that far off the qualifying pace either so that is encouraging. The car is good and I am very happy with the balance of the car – we are looking good for the race. It’s going to be tough, but I’m confident.”

Tom Kristensen (Team ADT Champion Racing Audi R8 #3): “We already knew from the pre-test session that we can not fight for pole position. But we are much closer than we thought which we are very happy about. First we wanted to concentrate completely on the race set-up this evening. But then things went so well that I tried another quick lap, of course without taking too many risks. I feel absolutely comfortable in our R8 and I’m looking forward to the start.”

Marco Werner (Team ADT Champion Racing Audi R8 #3): “I tried to improve our time up until the very last minute, but unfortunately got stuck in the traffic. But that doesn’t matter, because this evening we made a big step forward: Our R8 feels much better than yesterday and even at the beginning of today’s session. We found a perfect race performance. I’m absolutely happy because now I know what we are able to achieve this weekend.”

Jean-Marc Gounon (Audi PlayStation Team ORECA Audi R8 #4): “I am very happy because Franck did a very good job on the one-lap shoot. We are not far away from the reference which is McNish who knows the car. We also improved the set-up for the night. Now we have nothing we need to change for the race. I am very happy with our Audi. It will be a tough, but a very nice race.”

Franck Montagny (Audi PlayStation Team ORECA Audi R8 #4): “I had three runs on soft tyres, but only one worked. The other two times I got stuck in traffic. The best lap was the one just before the end of the first part of the final qualifying session, and it was a nice feeling when Dr Ullrich came to me and said ‘bravo!’ The car is very good and we have done all the work for the race we needed to do.”

Stéphane Ortelli (Audi PlayStation Team ORECA Audi R8 #4): “For us every lap was counting today. We have only one car in our team, so we don’t have the opportunity to go with one car for a race set-up and with the other one for a qualifying result. But P5 is not too bad to start the race. On the other hand we were able to work for the race. For us it was a dream qualifying today. We all love our R8 and the car’s set-up, so we can expect a lot for the race.”

Dave Maraj (Team Director Team ADT Champion Racing): “Champion Audi was the top Audi team on Wednesday and also on Thursday but although that is encouraging, it counts little for the race. I am surprised that Allan achieved third place – we had anticipated around sixth position. Tom was unlucky when he was on softer tyres and encountered traffic. For me winning Le Mans would be a lifetime achievement.”

Hugues de Chaunac (Team Director Audi PlayStation Team ORECA): “We expected to qualify between fourth and eighth, so it was a good qualifying for us. We did not try very hard because the race is more important. We are happy with the result and the car which is very well balanced. To see how reliable the Audi is gives the team a lot of confidence. For me it is the first time to have so much confidence on the reliability before a 24-hour race. There has not been a single problem with the R8 since the first day here.”

Dr Wolfgang Ullrich (Head of Audi Motorsport): “All three teams have worked towards a very good set-up for the race. The drivers are all satisfied. The long-runs we did in the night were quite good. In the race the strategy will be important, not taking any risks and making good pit-stops. I think we can do two laps more than our competitors in the night-stints. The Michelin tires should be good for three stints in a row during the night. It looks much better for us than during pre-practice.”

The starting grid at Le Mans