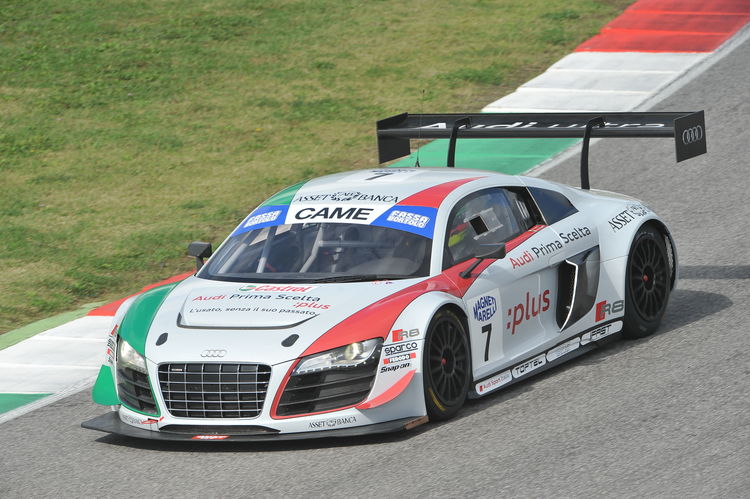 A successful motorsport weekend for Audi: Not only in the DTM did the brand with the four rings celebrate victories. Audi customer teams achieved success and podium places with the Audi R8 LMS in Germany, Italy and New Zealand as well.

In the finale of the Italian GT Championship at Mugello, Audi Sport Italia in a fiercely competitive field made up of eight different marques secured the runner-up’s spot in the manufacturers’ classification. The foundation for this success was laid by the Italian driver duo Andrea Amici and Marco Mapelli in the Audi R8 LMS ultra with victory in race one. The #7 sports car started the second race from pole position. In the end, Amici/Mapelli notched up another podium success in second place. Dindo Capello (I) and Emanuele Zonzini (RSM) in the sister car rounded off the positive result, as the pairing achieved third place in race two.

Podium success for Twin Busch Motorsport in round nine of the VLN Endurance Championship Nürburgring. For the first time, the Audi customer team had fielded a new Audi R8 LMS together with Audi Sport customer racing in order to prepare for the commitments planned for 2016. From position four on the grid, Dennis and Marc Busch together with Marc Basseng advanced to second place.

Julia Josten, a renowned TV host, presented the Audi drivers from the DTM to fans at the Hockenheim paddock. On Saturday and Sunday, spectators had an opportunity to get hold of autographs from all eight Audi drivers in front of the Audi Team & Media Hospitality. At the same time, the charming TV pro coaxed an intriguing statement here and there from the DTM stars.

The trophy for the title winner in the Audi Sport TT Cup was handed over to Heinz Hollerweger, Managing Director of quattro GmbH, in a ceremony held on the occasion of the season finale at Hockenheim. 60 apprentices of Audi in Neckarsulm had spent some 250 working hours on designing and making the trophy. The cup, which is 72 centimeters high and weighs 15 kilograms, was crafted from an aluminum block with a weight of about 30 kilograms. Following the final round on Sunday, the masterpiece changed hands on being presented to the first overall winner in the Audi one-make cup, Jan Kisiel.

At the season finale of the Audi Sport TT Cup, one star from the rally scene followed right after the other. Michèle Mouton, the 1982 World Championship runner-up in the Audi quattro, in her role as President of the FIA Women in Motorsport Commission, visited the two female TT Cup drivers Mikaela Åhlin-Kottulinsky and Gosia Rdest. In addition to the 1984 World Rally Champion Stig Blomqvist, the three-time World Rally Champion Sébastien Ogier swung by the Audi Sport TT Cup paddock. The brand-new Champion in VW’s employ was obviously impressed by the 310-hp Cup race cars and provided some of the guest drivers with valuable tips for their runs in the Audi one-make cup.

A tour on the trail of the Audi R8*: A group from the Belgian Audi Club visited the engine department of the Audi plant in Neckarsulm last week. Other stops included the new Audi R8 factory at Böllinger Höfe in Heilbronn, the workshops of Audi Sport customer racing and the Audi Forum in Neckarsulm. The two races of the Audi Sport TT Cup at Hockenheim, where the guests from Belgium particularly kept their fingers crossed for their club member Alexis van de Poele, marked one of the highlights of the tour.

Racing flair on the Family Day held at Audi’s plant in Brussels: In addition to information and adventure projects of the various departments, the more than 8,000 visitors got to see demonstrations by the Belgian Audi Club Team WRT. The crew of the Audi customer team that won the 24-hour race at the Nürburgring in 2015 demonstrated a pit stop on the Audi R8 LMS ultra.

A dominant race weekend by André Lotterer: The Audi factory driver won in the penultimate round of the Super Formula at Sugo in Japan, his adopted home. In the sixth of seven races of the season, the three-time Le Mans winner started from pole position. After 68 laps on the 3.704-kilometer Sportsland Sugo track, Lotterer recorded an advantage of more than 20 seconds. Following his victory in the opening race at Suzuka, this marked his second win in the fiercely competitive Japanese single-seater racing series this season.

A word from … Jamie Green

In terms of victories, Jamie Green with four wins under his belt is the most successful driver in the field of the 2015 DTM season.

There’s a question that only you can answer: What does it feel like to cross the finish line as the winner in the last race of the season, accompanied by big fireworks?

Winning the finale is very special. So many spectators in the Motodrom, rockets and firecrackers – you don’t find that in any other race. These are the moments I live for as a race driver. The photo will definitely be framed and find a nice place in my home.

2015 was your most successful year since you’ve been in the DTM. What was different or special this season?

It wasn’t just a single factor. Audi, the car, Team Rosberg – all these elements made for a near-perfect package this year. Singling out a particular item wouldn’t do justice to the situation. So, it wasn’t some kind of magic, but good people and hard work.

You won four races, more than any other driver in the field. How hard is it to be ‘only’ the runner-up in the championship in the end?

That’s not my way of thinking, even though, with ten victories for Audi, that might be a likely way to feel. I always analyze things race by race and ask myself: Did I do a good job? Was it my mistake that I didn’t score more points? What went wrong?

And what are the results of your analysis?

It’s almost funny in a way if it weren’t so hard. The technical difficulties on my car only came when I was in contention at the front of the field. My transmission didn’t fail while I was slipping around somewhere at the rear of the field in the rain but when I was leading on a dry track. When I started from position 17 in the second race at Hockenheim in May, my parking brake worked – but it didn’t when I was in position three of the grid at the Nürburgring.

What will the next few weeks of the runner-up in the championship look like?

First, we’re going to spend a week in England because my son still has a week of vacation. Then we’re going to return to Monaco when school starts again. Obviously, I’m going to get a bit of rest but then I’ll set up my training schedule and start riding my bicycle in the mountains. Next year, I’d like to come back even stronger.