Links
{{ activeItem() }}
Twitter
05/06/21
A journey through time: Looking back on our first-ever overall victory at the @24hNBR 2012 with @MarcBasseng,… https://t.co/wCrvLxQSPs
05/06/21
Welcome to Monaco. 🇲🇨 Getting everything unpacked and set up. The fourth @FIAFormulaE Monaco E-Prix will be taking… https://t.co/q4kOQNhSA7
05/06/21
[1/2] Good luck to the Audi teams this week: 🇫🇷 @GTWorldChEu &amp; @ffsa_gt at @MagnyCoursTrack 🇩🇪 @24hNBR Qualifying… https://t.co/42uNnY8OMk
05/05/21
Monaco E-Prix 2021, round 7 of the 2021 @FIAFormulaE World Championship. &gt;&gt; https://t.co/ktQ0jlvX5F… https://t.co/WPedrsmwAh
Audi Sport on Twitter
{{ activeItem() }}
Facebook
05/06/21
Traveling through time with our history at the ADAC TOTAL 24h-Rennen Nürburgring: Join us on looking back at each of our five overall victories, starting the journey with our maiden victory in 2012. Audi Sport driver Frank Stippler recalls the race when he and his teammates won the 24-hour classic at the Nürburgring Nordschleife. #PerformanceIsAnAttitude #24hNBR
05/05/21
Monaco has hosted the ABB Formula E three times so far. Our highlights include two runner-up finishes for Lucas Di Grassi in 2015 and 2017. The 2021 Monaco E-Prix will take place on Saturday, May 8. >> audi.com/FormulaE #FutureIsAnAttitude #MonacoEPrix
05/03/21
Two podiums and the championship lead for Audi Sport Italia at Autodromo Nazionale Monza highlighted the past race weekend for our customers worldwide. Well done to all! 🇮🇹 🇦🇺 🇺🇸 >> audi.com/GT3 >> audi.com/TCR #PerformanceIsAnAttitude
05/03/21
RACE WEEK: 🇲🇨 ABB Formula E Monaco E-Prix on May 8. Strap in for a ride around the circuit with Lucas Di Grassi in the Audi RS e-tron GT*. >> audi.com/FormulaE #Audi #etronGT #FutureIsAnAttitude #MonacoEPrix -------------------- *Power consumption combined: 20.2-19.3 kWh/100km (NEDC); 22.5-20.6 kWh/100km (WLTP); CO2 emissions combined: 0 g/km. Information on fuel/electricity consumption and CO2 emissions in ranges depending on the equipment and accessories of the car. Further information: www.audi.com/dat.
Audi Sport on Facebook 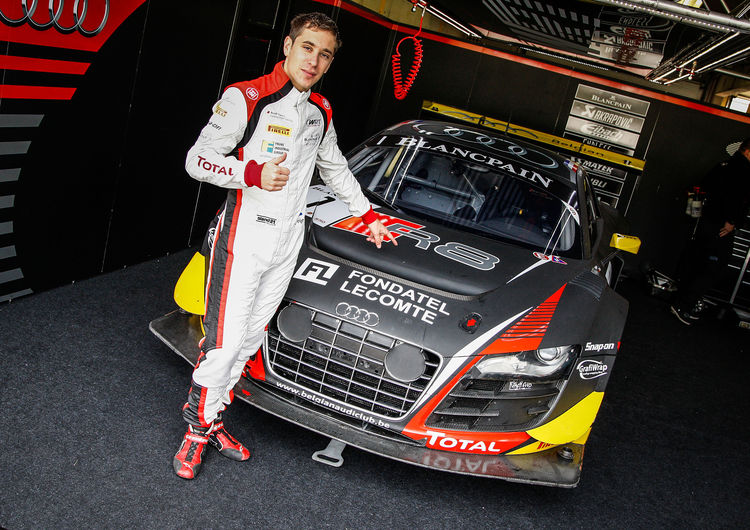 An action-packed weekend in GT racing: In the season finale of the Blancpain GT Series, the Dutchman Robin Frijns in the Audi R8 LMS ultra crowned himself Champion. In the Audi R8 LMS Cup, Alex Yoong und Congfu Cheng are sharing the top spot in the standings with equal points before the last race weekend. In addition, Audi customer teams celebrated podium places in various championships.

A strong team performance in the season finale of the Blancpain Sprint Series at Zandvoort in the Netherlands: With a second place in the main race alongside Christopher Mies, the Dutchman Robin Frijns in the Audi R8 LMS ultra secured the title in the Blancpain GT Series. On the dune circuit not far from the North Sea, Nicki Thiim und Frédéric Vervisch shone as well. In the qualifying race on Saturday, they took second place in front of their brand colleagues Niki Mayr-Melnhof/Markus Winkelhock (Phoenix Racing) and in third place on Sunday finished on podium again.

The fifth race weekend of the Audi R8 LMS Cup saw two different race winners. Alex Yoong from Malaysia extended his championship lead with his success in the first round. Kyong-Ouk You was happy about second place, Shaun Thong finished third. Bad luck struck Yoong and You in the second race though: both retired after a collision in the first corner. Marchy Lee won from Congfu Cheng and Swiss lady Rahel Frey. As a result, the championship situation is thrilling with one event to go at Shanghai: Alex Yoong and Congfu Cheng are tied on points at the top with Marchy Lee 17 points adrift.

Double podium in finale in England

In the penultimate round of the VLN Endurance Championship at the Nürburgring on October 17, Audi Sport customer racing together with Audi customer team Twin Busch Motorsport will be fielding a new Audi R8 LMS. The car will be driven by the twins Dennis and Marc Busch, who most recently celebrated an overall victory in the proven Audi R8 LMS ultra in round eight of the season. They will be backed by Marc Basseng. The Twin Busch Team is already going to use this run to prepare for the commitments in 2016 which are currently in planning. Production of the new Audi R8 LMS has been underway since September 21. Deliveries of the 585-hp sports car to customer teams will commence on October 26.

From the 2016 season on, the new Audi R8 LMS will be racing in Audi’s first one-make cup in Asia as well. The participants in the overall classification and in the Amateur Cup of the Audi R8 LMS Cup will be relying on the new race car that has been introduced this year. At the same time, the previous race car will be retained as the base for the Masters Cup, a classification for drivers not included in the professional league. “In the new race car, we continue to promote innovation, fielding the latest Audi technology in Asia,” says Rene Koneberg, Director of Audi Sport customer racing Asia. The new race car delivers up to 585 hp, depending on the regulations, and sets standards in terms of active and passive safety.

The officials of the race track at Sebring, Florida, are honoring Tom Kristensen. The Dane celebrated six overall victories, plus a class win, in the famous 12-hour race in the United States. With that, the former race driver holds a record. In an official ceremony, the long-standing Audi driver Kristensen will be inducted into the Sebring Hall of Fame together with other renowned personalities on March 18, 2016.

Preparations for the 40th ‘Golden Steering Wheel’ awards hosted by the Axel Springer publishing house are in full swing. Audi factory driver Mattias Ekström is a member of the expert jury again this year. The jury is comprised of chief editors, designers, celebrities, engineers and digital experts. The double DTM Champion tested various models over the last few days on a proving ground in Balocco, Italy. The final list consists of 38 cars in seven classes. The awards ceremony for Europe’s most important automobile prize will be held in Berlin on November 10.

Audi driver Benoît Tréluyer took part in an experiment at the race track in Austin: who laps the Circuit of the Americas faster – a computer gamer on the screen or a race driver on the real track? Provider Xbox One identified the best gamers from France, Germany, Great Britain, the United States and Canada, and invited them to Austin. Evan Thorogood beat the other competitors in the computer game Forza Motorsport 6 before subsequently competing against Benoît Tréluyer. While the 22-year old Canadian from Alberta sat on the virtual track starting line in the simulator, Benoît Tréluyer lapped the track in the Audi S3 Sedan: http://bit.ly/1P0141W

Tom Kristensen on the road for Audi in Denmark

The nine-time Le Mans winner Tom Kristensen is on a tour of Denmark for Audi. In Copenhagen, the Dane presented the new Audi R8 V10 plus in the presence of singer Pernille Rosendahl and three-time rowing Olympic gold medalist and world champion Eskild Ebbesen. In October, Kristensen is traveling to eight events across the country attended by a total of 1,000 invited guests in order to introduce the new Audi A4.

Benoît Tréluyer had an emotional reunion at the Fuji 6 Hours. The Audi driver met with former pro driver Kazuyoshi Hoshino in Japan. As a mentor, the 68-year old Japanese played a crucial role in the career of the Frenchman. “Without Kazuyoshi, my career wouldn’t be what it is and I’d hardly be an Audi driver today,” said Tréluyer. Hoshino, who won the Japanese Super GT Championship at the age of 47, founded his own team after ending his career. Tréluyer celebrated the 2006 Formula Nippon title win with the outfit.

The Head of LMP at Audi Sport about the performances in the FIA WEC race at Fuji.

In round six of the FIA World Endurance Championship (WEC) at Fuji, Audi was clearly more competitive than at Austin. Is this the hoped-for progress?

With our aerodynamically improved car, we’ve in effect come closer to the top even though we weren’t able to reap the fruit of our labor yet in Japan. Our increase in performance was already visible in qualifying. We’ve reduced the gap to Porsche considerably. We managed to lead the race at Fuji in the early stage. This means we’re absolutely competitive. A rival was very fortunate with their pit stop during a caution period. In response, we made a risky tire choice that didn’t pay off, so the results look plainly obvious. But in reality, the performance level is more balanced.

Audi was not only fast on track but made up ground with the pit stops too. How can this be explained?

This year, the competition has been fiercer than ever before and not only takes place on track. We realized that we were losing time during the pit stops, so we optimized our fuel tank system. With respect to the pure duration of the tire changes, we’re even better than our competitors. As a result, we gained valuable seconds in the pit lane as well. This makes us optimistic for the next races.

Not only car number 7 was running well. The sister car showed strong performances too.

In the early stage, Marcel Fässler maintained the fastest race lap for a long time. We managed to continually up the ante and in the end Loïc Duval achieved the fastest lap. It’s also important to understand the conditions in which this was managed. Visibility in the rain wasn’t optimal for Loïc Duval, Lucas di Grassi and Oliver Jarvis throughout the race – the inside of the windshield was fogged. In addition, there were problems with the windshield wiper. This makes the performances of this trio even more remarkable.

The title race is in full swing. What chances does Audi have this year?

In the two remaining races, 52 points in total are yet to be awarded. We’re currently separated from the top by just one point after Marcel Fässler, André Lotterer and Benoît Tréluyer had been the leaders of the standings since the beginning of the season. At Fuji, it was obvious that the manufacturers are pulling out all the stops and battling for every single point. Endurance racing is a team sport and with a positive team spirit, optimal results can be achieved in the interest of every brand. We have six strong drivers that we can rely on in any situation. We’re going to leave no stone unturned to become World Champions again after 2012 and 2013.