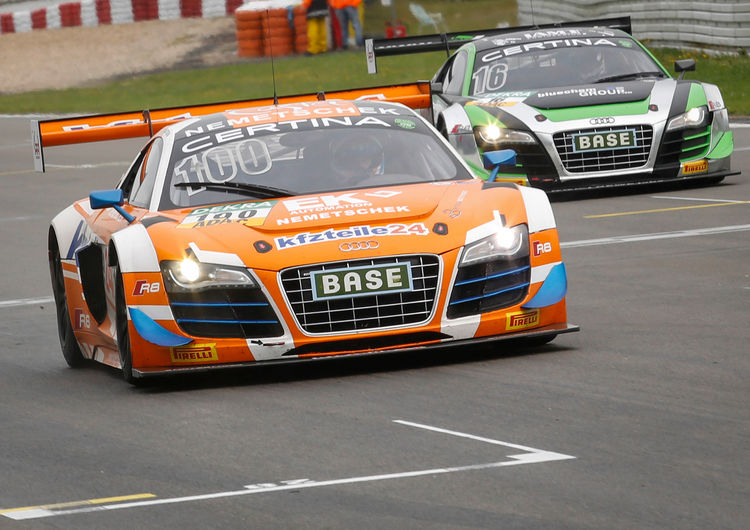 A total of eleven podiums for the Audi Sport customer racing teams in four different championships in Germany and England.

Breakthrough for Audi in the 2015 ADAC GT Masters

With a podium sweep and a 1-2 result, the Audi Sport customer racing teams delivered an impressive result at the Nürburgring after a difficult season so far in the 2015 ADAC GT Masters. The win in the changing weather conditions of the first race, and also the first win for Audi in the GT Masters this year, went to Daniel Dobitsch and Edward Sandström (kfzteile24 MS Racing). With Rahel Frey/Philip Geipel (Yaco Racing) and Stefan Wackerbauer/Kelvin van der Linde (C. Abt Racing), four more Audi drivers stepped onto the podium. In the second race it was kfzteile24 MS Racing that prevailed in the wet conditions with first and second place: Florian Stoll and Marc Basseng winning ahead of Dobitsch/Sandström.

Four class podiums for Spirit Racing at the Lausitzring

Dietmar Haggenmüller and Suzanne Weidt achieved four class podium results in two different championships with Audi Sport customer racing team Spirit Racing. At the sixth race weekend of the DMV GTC, Haggenmüller drove to second place in his class during the first race, followed by Weidt in third, both in Audi R8 LMS ultra cars. Weidt again finished third in the second race. The Lausitzring also hosted the fourth round of the P9 Challenge, where Haggenmüller/Weidt shared an Audi R8 LMS ultra and finished second in class.

A successful outing for Phil Burgan at the sixth race weekend of the GT Cup Championship. The Brit twice finished on the podium in his class with the Audi R8 LMS ultra from United Autosports. In both races at the Brands Hatch Circuit, Burgan achieved second position in the GTO class. In the final race he also finished runner-up overall.

Filipe Albuquerque ventured onto a downhill trail on a mountain bike for the first time. Instructed by the three-time Portuguese Downhill Champion Helder Padilha, the Audi Le Mans driver trained on the challenging mountain biking trails in Lousã in his native Portugal. “The pace and the jumps were awesome,” said an amazed Albuquerque. “It’s mainly about courage, fitness, experience and fast reactions to obstacles.” Benoît Tréluyer had a ball on two wheels as well. In the French mountain resort ‘Les Deux Alpes,’ the three-time Le Mans winner tackled downhill trails on a bicycle as well, but also toured the Alps on his motocross bike. Meanwhile, their team-mates Loïc Duval and Lucas di Grassi were testing for the new FIA Formula E season at Donington.

Ekström as an instructor at Spielberg

Mattias Ekström has passed on his knowledge from over two decades in motorsport to hobby racers and motorsport enthusiasts. About two weeks following his victory in the DTM race at the Red Bull Ring, the Swede returned to Spielberg and served as an instructor at the ‘Go with the Pro’ Red Bull event for two days. The training was centered on the interaction of braking, cornering and focusing on field-of-vision techniques. The participants practiced in various vehicles, including karts, formula and sports cars. In addition to the driver training at the Driving Center and on the race track, they had the opportunity to elicit a few tips and tricks from the two-time DTM Champion at a gala dinner.

In Bern, visitors of the Shopping and Leisure Center Westside demonstrated their racing skills this weekend. They competed against Audi driver Nico Müller in DTM Raceroom simulators and won various prizes, including tickets for the DTM season finale at Hockenheim. The 23-year-old DTM race driver from Thun also signed autographs for the numerous fans at the largest and most modern shopping center in the Bern region on Friday and Saturday. “It’s great that the audience has so much interest in our sport,” said Nico Müller. “Many people had their picture taken in front of the Audi RS 5 DTM and were tremendously thrilled after competing in the simulator game.”

Christopher Haase has been on the road in a new Audi RS 4 Avant since today. “The model is absolutely sporty, but the RS 4 Avant can be driven quite comfortably and in a relaxed style as well. I also like the fact that the Avant is practical and offers ample space,” says the two-time winner of the Nürburgring 24 Hours. The 27-year-old professional race driver, who is currently the runner-up in the standings of the North American TUSC racing series, picked up his RS 4 Avant in Misano Red pearl effect color at the Audi Forum Ingolstadt on Tuesday.

A word from … Nicolaj Møller Madsen

The Dane is the mid-season Audi Sport TT Cup leader.

Nicolaj, what has been your highlight in the Audi Sport TT Cup so far?

That’s hard to say. On track, it’s definitely been my victory at the Norisring. The atmosphere with all the Audi fans in attendance is impressive. It wasn’t an easy race either. I started from position four on the grid and had to battle my way forward. But off track, the Norisring has left the strongest impression with me too. Following my victory, Dr. Wolfgang Ullrich, Tom Kristensen and Marcel Fässler personally congratulated me. That was definitely a cool moment and my father was obviously proud of me.

You are 18 permanent entrants in the Audi Sport TT Cup. Rivals on track, but friends off track? It always looks as if you’re having a lot of fun with each other?

Yes, that’s right. Not just we drivers get on well with each other, but the instructors, Markus Winkelhock and Marco Werner, and the entire organizational team, are great, too. Being in the Audi Sport TT Cup is simply fun and when things are also going well on track, so much the better.

How important is physical fitness to you for being successful in racing?

In my opinion, it’s one of the most important aspects. Everyone is improving from race to race. So, when you have the same equipment, like in the Audi Sport TT Cup, physical fitness can make the difference, even more so than mental strength. You can’t do well when you’re exhausted.

It’s halftime now in the Audi Sport TT Cup. What are your plans for the second half of the season and what are your sporting aims for the future?

I’m going to continue what I’ve been doing during the first half of the season, in other words, hard workouts at the gym, on my bike and so on. For the races, I prepare myself with simulator training and video data. If I manage to keep my strength and regularly score points, then I’ll be able to stay in contention at the very front up to the season finale at Hockenheim, too. I’d love to stay with Audi in the future. If an opportunity in the GT3 program opened up afterwards, that would be terrific. But my biggest aim is Le Mans.

Have Danish race drivers inspired you in your career?

Tom Kristensen was, and still is, my biggest inspiration – as a person and by the way he works. He’s my biggest role model.