Skip to content
Please participate in our survey and help us improve the Audi MediaCenter. Thank you!
Go to survey
06/14/15
Ingolstadt
Motorsport 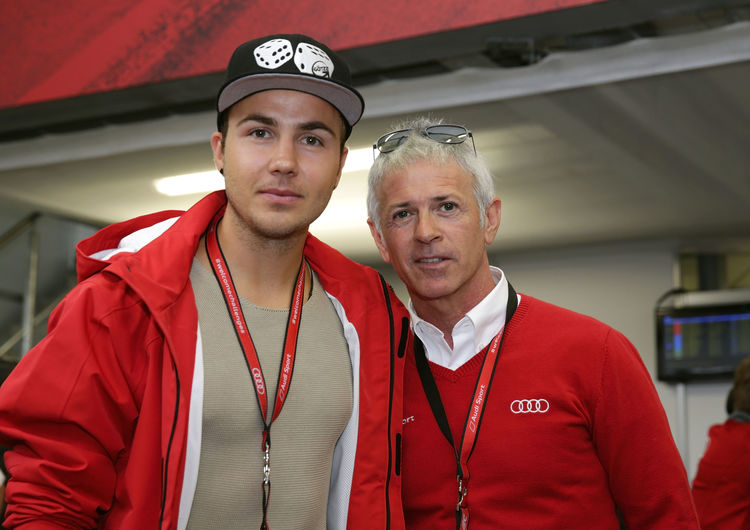 The motorsport weekend was dominated by the 24-hour race at Le Mans. Soccer star Mario Götze rooted for the squad in the Audi pits at Le Mans.

Le Mans has gained another prominent fan: Mario Götze witnessed the 83rd running of the iconic race live in the garage of Audi Sport Team Joest. The soccer player from FC Bayern München, who had shot the winning goal for Germany in the 2014 World Cup, had already stopped by for a brief visit of the paddock during the night from Saturday to Sunday. “An incredibly fascinating race. Watching it live, the speed is even more impressive than what it is on TV,” said Mario Götze. “I was delighted about the opportunity to take a peek behind the scenes. If it fits my schedule, I’d like to be here again next year.” Audi has been a partner of FC Bayern München since 2002.

Following three victories in four years, André Lotterer, together with his team-mates Marcel Fässler and Benoît Tréluyer, took third place at Le Mans. The German in a brief interview.

Third place at Le Mans: Is the joy of the podium predominant or the disappointment following three victories in four years?

Taking on the Le Mans challenge also means that you have to expect not to win for once. That’s why we congratulate the guys from Porsche on their success. From our own experience we know exactly how hard it is to clinch victory here. Everything has to fit together perfectly, plus you need some racing luck as well – unfortunately, that wasn’t the case with us this weekend. That’s why we have to settle for third place this year and be happy about it.

Why didn’t the victory work out?

Obviously, we’re disappointed, but today is not a day to be sad. We fought hard, but had a few difficulties too many. The repairs on our engine cover kept costing us valuable time. We did everything we could to make up for that and, in any event, delivered a thrilling race for the spectators that way. I believe it was motorsport at the highest level.

Even though it wasn’t enough to clinch victory, the Audi R18 e-tron quattro was the fastest car in the field.

We managed setting the fastest lap with a new lap record in the race. This shows that we’ve got a very good car and that the whole squad did a fantastic job, both in preparation and during the week here at Le Mans.

After taking third place, you’re continuing to lead the WEC overall standings together with your team-mates. Is that some consolation?

Le Mans is such an outstanding race which everybody wants to win. Still, these were important points today in our battle for the WEC title that continues to be a big aim for us that we’re concentrating on. We’re now going to analyze the findings from Le Mans and then enter the remainder of the WEC season that will only really get started after the summer break.