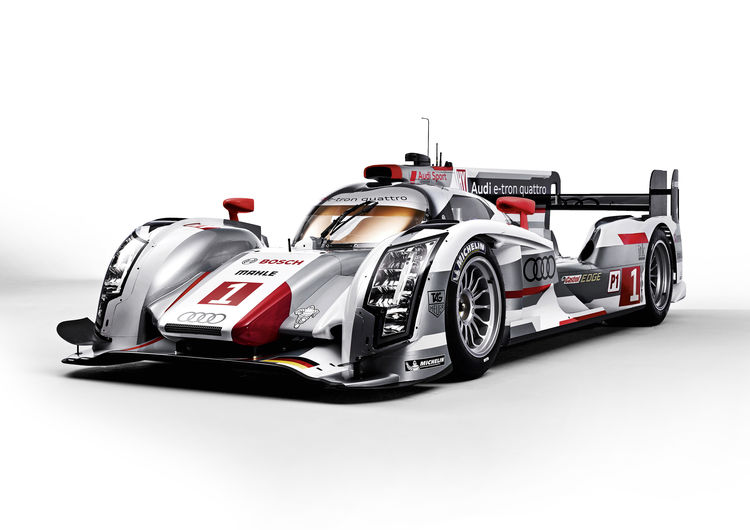 It will be the first race of the 2013 WEC season but the second sports car event for Audi Sport Team Joest this year. In March, the brand with the four rings celebrated a one-two victory at the Sebring 12 Hours in Florida, a race that was not part of the WEC. At the WEC season opener in England, the two Audi R18 e-tron quattro cars will be meeting with two hybrid sports cars from challenger Toyota. At the wheel of the two Audi sports prototypes will be the current World Endurance Champions, Marcel Fässler/André Lotterer/Benoît Tréluyer (CH/D/F), plus Loïc Duval/Tom Kristensen/Allan McNish (F/DK/GB).

Last year, the fans saw a battle of the two manufacturers on the 5.891-kilometer circuit at Silverstone that was thrilling all the way to the end. After the lead had changed 14 times in the course of the six hours of racing, Audi with an advantage of 55.675 seconds achieved the fourth of five season victories.

This year, the UK crowd can look forward to various new elements in the World Endurance Championship. The Audi R18 e-tron quattro version that has been improved in many details will be racing in Europe for the first time. This “evolution of a revolution” features optimized aerodynamics, a hybrid system that has been subjected to further development plus ultra-lightweight design which has been optimized yet again. A new driver assistance system has two forward-pointing cameras on the roof that improve the driver’s view from the cockpit.

While these developments mark a forward step, the regulations limit the sheer performance potential of the race car in a sensitive area. Due to a smaller air restrictor the 3.7-liter V6 TDI engine now delivers only 360 kW (490 hp) – around 15 kW (20 hp) less than last year.

The sporting regulations feature several changes as well. For the first time, qualifying will no longer be contested by just one driver per car. Now, two drivers have to complete at least two timed laps. The average of these four fastest laps determines the grid position. In the manufacturers’ classification, all eight race results will be counted in the 2013 season. There will no longer be any void results like last year, so reliability will be even more important than before.

The spectators and motorsport fans in the United Kingdom are not only regarded as a particularly knowledgeable and brand-loyal audience. Their love of automobiles is reflected in growing enthusiasm for Audi as well. The company has nearly doubled its annual sales in the UK within the space of ten years. In fiscal year 2012 alone, growth amounted to 7.2 percent. With 123,640 delivered automobiles, the United Kingdom is the second-largest European market for Audi after Germany.

- Will Audi be able to repeat last year’s Silverstone victory?
- What impact will the new qualifying format have?
- Will the race cars with their reduced power ratings achieve similar lap times as last year?
- Which of the two Audi driver pairings will make the best start into the season?

Dr. Wolfgang Ullrich, Head of Audi Motorsport: “The title defense for Audi begins in the country that is the European cradle of motorsport – the United Kingdom. A year ago, Audi’s hybrid technology prevailed in a thrilling race at Silverstone where we celebrated the early title win in the manufacturers’ classification of the FIA World Endurance Championship as well. After our victory in the Sebring 12 Hours in March, we’re now excited about our first duel this year with our competitor Toyota.”

Ralf Jüttner (Technical Director Audi Sport Team Joest): “Although the WEC season only opens in England in the middle of April we started our preparations for the season with Audi a long time ago. We participated in a number of track tests this year and successfully contested the Sebring 12 Hours. From now on, every single point will count. The World Championship will be even more challenging this year as we’re expecting to meet with a tough opponent right from the beginning. We’re looking forward to this competition.”

Marcel Fässler (36/CH), Audi R18 e-tron quattro #1 (Audi Sport Team Joest)
- At Silverstone, celebrated his first victory in a 6-hour race last year
- Won the Sebring 12 Hours in March
“The track at Silverstone is nice, fast and suits me really well. My two team-mates and I want to repeat last year’s victory for Audi. The crowd in England is very special. For the large number of fans in the UK, Silverstone has the tradition of being the home of motorsport.”

André Lotterer (31/D), Audi R18 e-tron quattro #1 (Audi Sport Team Joest)
- Wants to defend the World Champion’s title with his team-mates
- WEC season opener marks first racing commitment in the 2013 season
“After my team-mates won the 12-hour race at Sebring, I’m looking forward to my first race this year at Silverstone. I hope that Benoît Tréluyer and Marcel Fässler will be bringing the momentum from America to the WEC season opener. We want to win this race again. We’re hoping for good weather in April. But even if it should rain, this won’t be a problem – because our car’s got quattro drive.”

Benoît Tréluyer (36/F), Audi R18 e-tron quattro #1 (Audi Sport Team Joest)
- Is starting his fourth season with Audi
- Celebrated victory at Sebring in the 12-hour race
“Silverstone will be an initial assessment of where Audi stands in the battle with Toyota. The circuit is fast but not as fast as the track at Le Mans. I really enjoyed the race last year. Of course, we want to win again.”

Loïc Duval (30/F), Audi R18 e-tron quattro #2 (Audi Sport Team Joest)
- Is contesting his first full WEC season
- Clinched a victory and a second place in the WEC last year
“For me, everything is new. My season will begin at Silverstone and I’m happy about starting into the WEC alongside Tom Kristensen and Allan McNish for the first time. I don’t know the current Silverstone track configuration while I’m driving the R18 e-tron quattro in a race for the first time as well. With so many things being new I’ve set myself one aim: to get through the weekend without any mistakes in order to achieve a good result.”

Tom Kristensen (45/DK), Audi R18 e-tron quattro #2 (Audi Sport Team Joest)
- The eight-time Le Mans winner is the WEC runner-up of the 2012 season
- At Sebring, he took second place in March
“Silverstone is a nice venue for starting the World Championship. I’m expecting even more fans this year than last year. I’m eager to see how strong the other teams will be this season. There are a lot of ‘courage’ corners at Silverstone, plus very narrow hairpin turns. This mix will no doubt be suiting our new car well.”

Allan McNish (43/GB), Audi R18 e-tron quattro #2 (Audi Sport Team Joest)
- The Scotsman experiences his “home” round at Silverstone
- He started from the first row there last year
“We’re all looking forward to the World Championship. For me, it starts with a ‘home’ round. The weather at Silverstone will play a role and we’re expecting it to be much colder in April than it was at the last race in summer. If it rains we might have a small advantage thanks to e-tron quattro. But even in the fast turns like in the section from Copse to Stowe our car was very good last year. We’ve been paying attention to improving our acceleration out of slow turns as well. The 2013-specification R18 e-tron quattro is a competitive car.”

The Audi drivers at Silverstone

All Silverstone winners (since 2004)

“In April, the weather in the UK is changeable and the tire choice difficult. The track was modified two years ago. Turn 1 is a very fast corner that we drive in fourth gear. Then the slowest passage follows. Afterwards, we immediately start accelerating again to have a chance for overtaking towards Luffield. We brake far into this corner. Then we move on towards Copse, Becketts and Stowe – the fast corners. We practically throw the car into these turns. There are a few bumps approaching Stowe. In Club corner and on the way back to the start and finish, it’s not easy to put the power on the ground. At Silverstone, we’ve got a maximum of three places for overtaking – when braking into Club, Luffield and Stowe.”