Audi in the DTM with strong partners 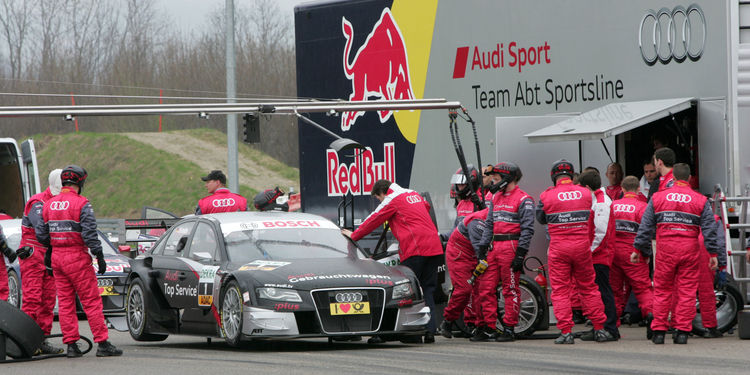 Audi has string partners in the 2010 DTM.

This makes the partnership between the manufacturer of the world’s most successful energy drink and Audi one of the longest in DTM history, particularly since the corporation founded by Dietrich Mateschitz in 1984 had supported Team Abt Sportsline in fielding its TT Coupés in the DTM in the two preceding years.

“I can’t even imagine my Audi without the bull of Red Bull anymore,” says the two-time DTM Champion Mattias Ekström who has been contesting the DTM in cars sporting the Red Bull colors since 2002 and who, like his team colleague Martin Tomczyk, is personally supported by the Austrian beverage producer as well.

Until the 2008 season the only visible differences between the two vehicles driven by Ekström and Tomczyk were the color markings. Since last year, however, Tomczyk has been advertising Red Bull Cola on his Audi A4 DTM.

“This is definitely in our interest because in the DTM fans should be able to immediately identify every car at first glance as much as possible,” explains Siegfried Krause, Head of Partnerships at Audi Sport. “That’s why in the 2010 season all of the nine Audi A4 DTM cars will again have their own designs which are shaped by the respective main sponsors.”

The Audi A4 DTM driven by title defender Timo Scheider has a high recognition value too: as in the years before, the two-time DTM Champion advertises Audi Top Service and Audi Gebrauchtwagen :plus on his black car.

Audi Top Service stands for top quality in customer service. Audi Gebrauchtwagen:plus are attractive used cars from the open market, second-hand cars previously owned by Audi employees for one year under a fringe-benefit program, and company cars from Audi’s own fleet. The vehicles are subjected to vigorous checks covering 110 different items.

“I can superbly identify with these two partners - and they perfectly fit Audi’s DTM commitment,” says Timo Scheider. “Without the top-notch service by the Audi mechanics I wouldn’t be able to win a race. And in a manner of speaking we’ve all got used cars in the 2010 DTM due to the technology freeze ...”

Two other subsidiaries of the Audi Group - the Audi Bank and quattro GmbH – are using the DTM to attract attention to their products and services too. The Audi Bank is a leading financial services provider for private and business customers in Europe and one of Germany’s major direct banking institutions. The S line sport packages by quattro GmbH give Audi vehicles an even sportier touch.

The list of external partners who are jointly tackling the “title defense” project with Audi in the 2010 season is impressive as well: Auto-Bild motorsport, Glamour, LuK, INA, Nintendo, Red Bull, Red Bull Cola, Tabac Original, Playboy, Sport-Bild and TV Movie – like Audi, all of them are strong brands and most of them are the market leaders in their particular segments.