Audi in front for the third time in WEC qualifying 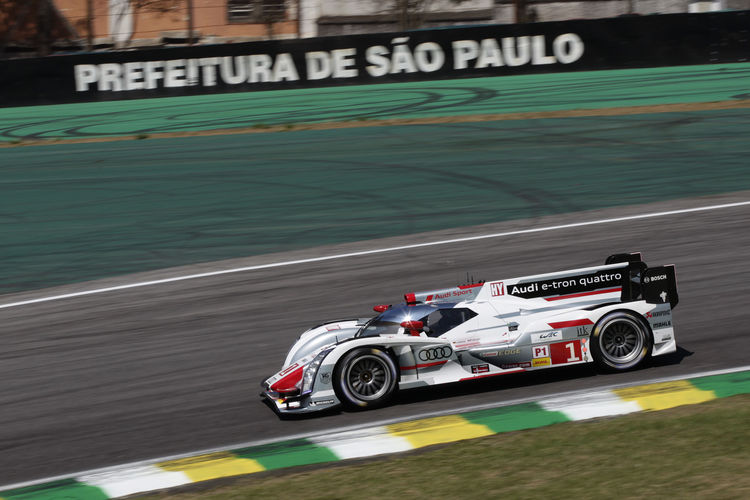 Audi has created an ideal starting base for round four of the FIA World Endurance Championship (WEC). The two Audi R18 e-tron quattro cars of Audi Sport Team Joest qualified for the front row of the 6-hour race with a difference of only five hundredths of a second.
Download PDF (163 KB)
Facebook
Twitter
LinkedIn
WhatsApp

Audi has created an ideal starting base for round four of the FIA World Endurance Championship (WEC). The two Audi R18 e-tron quattro cars of Audi Sport Team Joest qualified for the front row of the 6-hour race with a difference of only five hundredths of a second.

The two Audi driver squads fought a thrilling battle for the best positions on the grid. Marcel Fässler (CH) on his two qualifying laps in car number ‘1’ met with his team-mate Loïc Duval (F) in number ‘2.’ Afterward, Benoît Tréluyer (F) and Tom Kristensen (DK) took over the cockpits. In the aggregate of the four fastest lap times, this year’s Le Mans winners initially had a lead of 0.172 seconds. But then Tréluyer upped the ante once more and in the average of all the times posted achieved an advantage of 0.05 seconds over the sister car. After Duval had last clinched the pole position at Le Mans in June, car number ‘1,’ just like at Spa in May, managed the leap to the top. Challenger Toyota with a gap of 0.277 seconds took third place in qualifying at São Paulo.

While the result was close on Saturday it hardly allows any conclusions to be drawn about the relative strengths on Sunday. On the track at Interlagos with its narrow and relatively slow middle sector, Audi, due to the regulations, is not allowed to use the hybrid system of the R18 e-tron quattro below 120 km/h. In addition, Audi Sport Team Joest is expecting to make an additional pit stop compared to the strongest competitor, Toyota, as the fuel tank capacity of the diesel hybrid sports car, due to the regulations as well, is significantly smaller.

The 6-hour race at São Paulo starts at 12:00, local time, on Sunday. Round four of the 2013 WEC season can be watched by live streaming on the internet at www.audi-motorsport.com and at www.fiawec.com. Eurosport will broadcast a summary of the race in Germany on Tuesday, September 3, from 9.15 to 9.45.

Dr. Wolfgang Ullrich (Head of Audi Motorsport): “Qualifying has shown that we’ve got a drivers’ squad that drives on a very high and consistent level. I’m very pleased with grid positions one and two – that was a superb performance. But on Sunday a new task is awaiting us. We expect having to make one more pit stop than our competitors from Toyota as the fuel tank capacity was changed once more before Le Mans. But we’re going to give everything to turn this into a good result anyhow.”

Chris Reinke (Head of LMP): “Our drivers were very concentrated, the cars presented themselves perfectly and the team did a very good job. That was a very motivating start to the weekend. We’re well prepared and can hardly wait for the race to start.”

Ralf Jüttner (Technical Director Audi Sport Team Joest): “After the free practice sessions, we expected such a close qualifying. Positions one and two are very good starting bases. Furthermore, car number ‘1’ on clinching the best time secured a point in the drivers’ championship. The cars were running well, all the drivers are pleased. Tom Kristensen had a small spin toward the end and wanted to go out once more. But we’ve got to think about Sunday because the tires from qualifying are prescribed for the beginning of the race as well. The fans can look forward to an entertaining race.”

Marcel Fässler (Audi R18 e-tron quattro #1): “Only in qualifying for the Sebring 12 Hours the gaps between our cars were even closer this year than they were this time. In the end, only the time counts, no matter how small the gap is. More important than this difference is the fact that we made up a point in the Championship: A small step in a big recovery!”

André Lotterer (Audi R18 e-tron quattro #1): “I can superbly rely on my team-mates. The whole squad did a first-class job. That it’s so close is a good sign for both cars. The important thing is for us to stay in front of Toyota. I hope that the positions will remain the same tomorrow...”

Benoît Tréluyer (Audi R18 e-tron quattro #1): “The task was pretty difficult. On new tires, Marcel delivered a first-rate job. I wasn’t so confident in the beginning because I caught other cars and my car had significant understeer. In the end, I managed some pretty good laps anyhow. It’s important that the tires remained in good condition for the race. And of course on Sunday it’ll be about strategy as well. Things are looking good but we’ve got to maintain our concentration.”

Loïc Duval (Audi R18 e-tron quattro #2): “The positive thing was that our Audi R18 e-tron quattro feels very good. I suppose I was a bit too conservative on my laps but the times weren’t bad despite that. Now we’re in second place even though we’d have preferred being in first. But we’re part of the front and absolutely competitive. A year ago, Toyota were far ahead of us, now we’re in front.”

Tom Kristensen (Audi R18 e-tron quattro #2): “Our car was running well and my first timed lap was fast. Unfortunately, the second one wasn’t quite so good anymore. When I saw my time of 1m 21.3s I knew that position one was realistic. But unfortunately I hit the left curb in turn one and spun. I let the car coast and thus saved the tires for the race. Congratulations to our team-mates on their flawless performance.”

Allan McNish (Audi R18 e-tron quattro #2): “For Audi, the solid line-up on the front row is fantastic. Loïc and Tom, unfortunately, didn’t always catch a clear lap. The important thing is that all of us feel comfortable in our Audi R18 e-tron quattro. On Sunday I’m expecting a very hard race because Toyota so far have usually been a bit stronger in the race than in qualifying. But we’ve got a very good car for this task.”