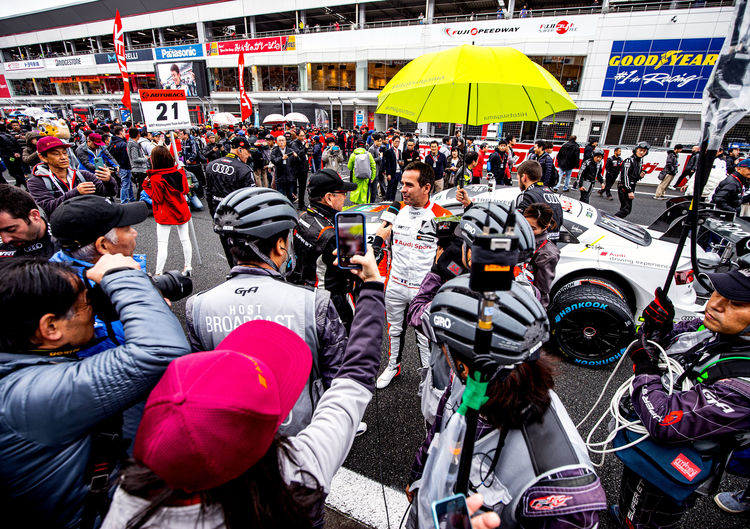 Surprise in the “dream race” at Fuji (Japan): in the turbulent first joint race of the DTM and the Japanese SUPER GT Championship, Benoît Tréluyer in sixth position was the best Audi driver on Saturday.

In his first race with the Audi RS 5 DTM, the Frenchman benefited from a late safety car period. On the freshest tires in the field, Tréluyer made up several positions after the restart and crossed the finish line as the best-placed driver of a DTM car.

“That was huge fun today,” the Le Mans winner and World Endurance Champion, who is racing at Fuji with support by Audi Japan and Hitotsuyama Racing for Audi’s customer team WRT Team Audi Sport, enthused. “I extremely enjoyed my first race in the Audi RS 5 DTM – especially of course the last laps after the restart, that’s when we were really fast. I hadn’t expected such a result in my comeback after a three-year break. I’m deeply sorry about touching ‘Rocky’ and causing him to spin in the commotion after the restart. He didn’t see me and I just didn’t have any room to get out of his way.”

Following a difficult qualifying, René Rast in the Audi RS 5 DTM of Audi Sport Team Rosberg from the 13th spot on the grid fought back into the top six and thrilled the large crowd of Japanese trackside fans with spectacular duels during his fightback. On degrading tires, the German, dropped to eighth position in the final stage.

With Mike Rockenfeller from Audi Sport Team Abt Sportsline in 13th place, Audi also provided the third-best driver of the DTM lineup on Saturday in spite of the collision with Tréluyer.

Loïc Duval from Audi Sport Team Phoenix shone in qualifying in rainy conditions with the second-best time. However, on the way to the starting grid, the Frenchmen slipped off the wet track. His car was so heavily damaged in the incident that his place on the front row remained empty. For the second race on Sunday (start at 2.30 PM local time/6.30 AM CET) his Audi RS 5 DTM will be ready to race again.

“This was a turbulent and riveting race,” said Head of Audi Motorsport Dieter Gass. “Unfortunately, we weren’t able to fight for victory today. The SUPER GT cars were simply a little too fast for us to be in contention and also had less tire wear. That made it difficult for us. Even so, we won the classification within the DTM and saw many thrilling duels – especially at the end after the safety car. I’m very happy for Ben (Tréluyer). He made good use of his tire advantage toward the end. I feel that the fans already got their money’s worth today and very much hope that we’ll do even better tomorrow in order to deliver an even better show to the spectators. The atmosphere was already outstanding today.”

In Germany, SAT.1 starts airing live coverage from Japan at 6.25 AM (CET) on both Saturday and Sunday. The race can also be watched live on the DTM’s new OTT streaming platform at www.dtm.com/de/dtm-grid/event/fuji-dream-race.