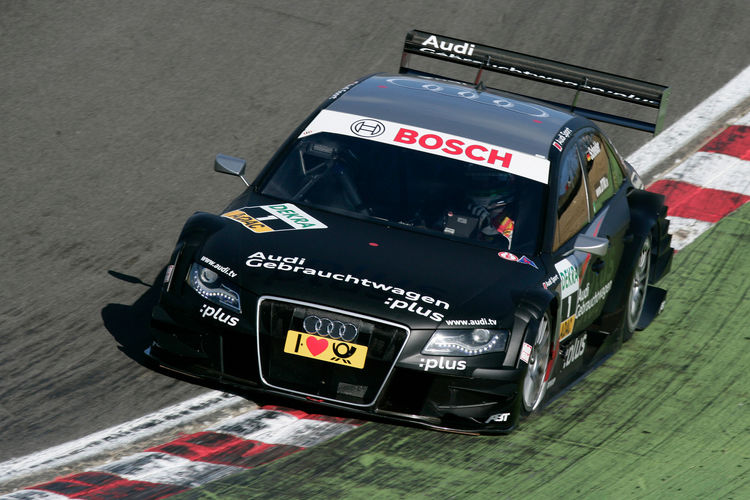 With a strong qualifying performance Audi driver Timo Scheider achieved a good starting base for the DTM race at Brands Hatch. The leader of the standings was the quickest of the favorites for the title and will start from the front row in his Audi A4 DTM on Sunday (live broadcast starting at 1:45 pm – German time – on “Das Erste”).

In the shoot-out for the top four grid positions on Saturday, Scheider merely had to admit defeat to the Scotsman Paul Di Resta, who was just 81 thousandths of a second faster than the Audi driver. Consequently, the same two drivers as last year will start from the front row on Sunday – albeit in reverse order this time.

“Brands Hatch was already a good track for me last year – and with a front-row position, I’m again off to a good start,” said Scheider. “The times are incredibly close. Of course at the moment I’m looking at Gary (Paffett) and Mattias (Ekström) in particular – and in this respect I was the one who did the better job today. If I manage a good start again tomorrow, anything will be possible.”

His teammate Tom Kristensen, who secured third place on the grid, was just six thousandths of a second slower than Scheider. Martin Tomczyk and Mattias Ekström will go to the race from positions five and seven. Between the two Audi drivers is Gary Paffett, who is currently the best-place Mercedes driver in the overall classification.

With local hero Oliver Jarvis on position nine and Markus Winkelhock on position ten, a total of six Audi A4 DTM cars will start to the race from the first five rows. “This means we’ve got good chances of extending our overall lead,” said Head of Audi Motorsport Dr. Wolfgang Ullrich, assessing the qualifying results positively despite the fact that Audi – after clinching eight consecutive pole positions – had to settle for second place on the grid for the first time since September 2008. “Obviously, such a long string of pole positions had to come to an end at some point in time, that’s why I can live with this result very well – particularly when the competition is as close as it is in the DTM and especially on this short circuit. In the end, we were just lacking a couple of hundredths. But we’ve got two cars in the top three. That’s a respectable showing.”

Although Audi’s series of setting the fastest times in qualifying ended at Brands Hatch, another impressive one didn’t: For the 13th consecutive time, an Audi A4 DTM is on the front row in the most popular international touring car racing series.