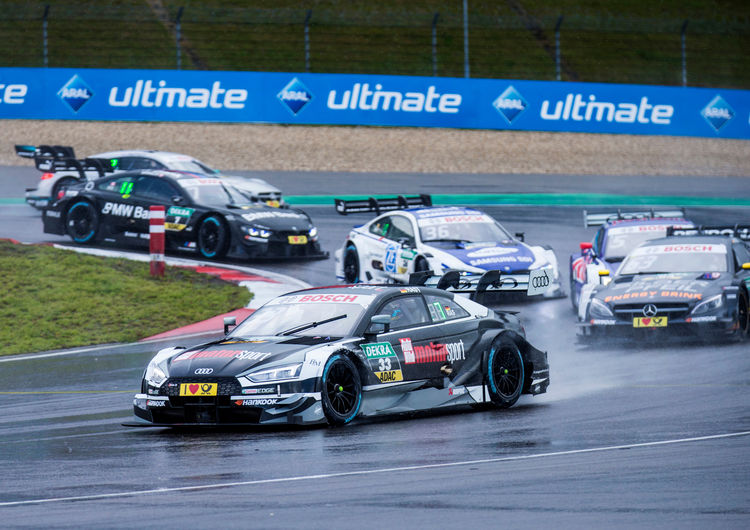 In a difficult wet race at the Nürburgring, the front runners in the DTM standings have moved closer together. Before race two on Sunday (start at 3:15 PM), Audi driver Mattias Ekström is only one point ahead of Saturday’s winner Lucas Auer (Mercedes-Benz) and four in front of René Rast, who in position five in race one was the best Audi driver.

All day, heavy rain showers in the Eifel made for changeable conditions which, in total within the Audi squad, René Rast and Audi Sport Team Rosberg handled best. DTM rookie Rast in qualifying on a drying track was the fastest Audi driver, in position seven. In the early stage of the race, the German, following a collision for which he received a caution, dropped to eleventh place. While many drivers switched from rain tires to slicks about halfway through the race, Rast delayed his pit stop as long as possible. As a result of this strategy, he still advanced to position five.

“It was a difficult race, but in the end a good result with fifth place,” said Rast. “I was the best Audi driver once again and scored important points for the championship. Initially, things weren’t looking so good. The first set of tires was not the way I expected it to be. On the second one, it was much better.”

His teammate, Jamie Green, changed tires even later and advanced to sixth place that way after the Briton had been in 18th and last place in the first half of the race. The two drivers of Audi Sport Team Rosberg were the only two Audi campaigners on Saturday to score points.

Mattias Ekström suffered misfortune in a major way. The Swede from Audi Sport Team Abt Sportsline on a wet track in the first half of the race battled his way forwards from grid position eleven to sixth place, but changed from rain tires to slicks just at the moment when rain set in again at the Nürburgring. Ekström then had to pit for another tire change and finished the race in position 15.

His teammate, Nico Müller, changed tires twice as well, but with two early stops managed to advance to eleventh place after having started from the last row. Mike Rockenfeller and Loïc Duval finished the first of the two races of Audi Sport Team Phoenix on home soil in positions 14 and 18.

“René (Rast) and Jamie (Green) under today’s conditions did everything right,” said Head of Audi Motorsport Dieter Gass. “For Mattias (Ekström), who was doing really well and might have even finished third or fourth, the race was very frustrating. Unfortunately, he pitted for the tire change at exactly the wrong moment. As a result, he hopelessly lost ground which was very painful with respect to the championship.”