Audi driver Allan McNish on front row of the grid 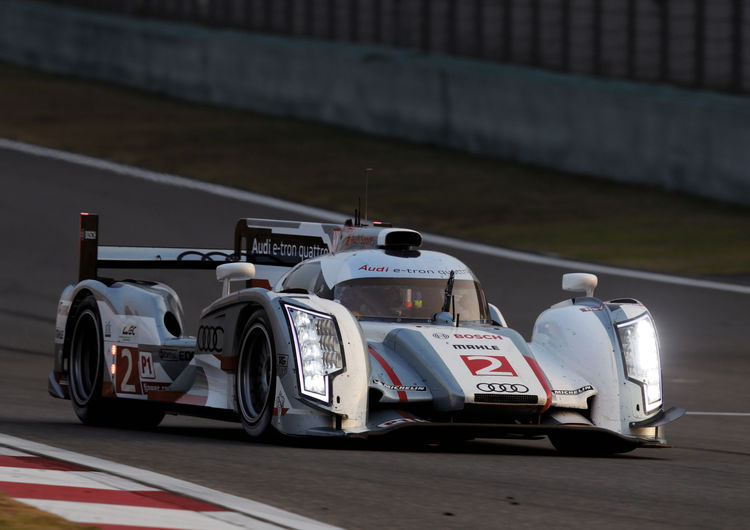 In qualifying for the finale of the FIA World Endurance Championship (WEC) at Shanghai, Allan McNish drove the second-fastest lap in the Audi R18 e-tron quattro. The Scotsman only missed setting the best time by a razor-thin margin.
Download PDF (169 KB)
Facebook
Twitter
LinkedIn
WhatsApp

In qualifying for the finale of the FIA World Endurance Championship (WEC) at Shanghai, Allan McNish drove the second-fastest lap. The Scotsman only missed setting the best time by a razor-thin margin.

Allan McNish in the Audi R18 e-tron quattro achieved his personal best time on his first “flying” lap when it only took him 1m 48.373s to complete the 5.451-kilometer distance of the track at Shanghai. Only Toyota driver Alexander Wurz was a tenth of a second faster later in the session. Audi thus managed to clearly improve its performance from the free practice sessions. The day before, the time difference between the two teams in the second free practice had amounted to 1.1 seconds and in the third free practice session this morning it had been 1.6 seconds.

The second Audi R18 e-tron quattro will start the race on Sunday from position three. After a small mistake on his first timed lap, André Lotterer at the wheel of car number “1” was trailing the front runners by 1.3 seconds. The German later managed a remarkable recovery when he reduced his deficit by an entire second to three tenths of a second on the same set of tires.

With these performances, the two driver squads have achieved a balanced tally in qualifying throughout the season. This year, car number “2” finished the inter-team comparison best on four occasions and so did car number “1.” On five of the eight race weekends, Audi clinched the top spot on the grid.

The start of the race on Sunday at 11:00 local time marks the final round of the battle for the title: Marcel Fässler/André Lotterer/Benoît Tréluyer have a 16.5-point advantage in the standings over Tom Kristensen/Allan McNish. Both teams are battling for the title in the drivers’ championship.

The eighth WEC round will start on Sunday at 11:00 local time (4:00 CET) and can be watched live on the internet: www.audi-liveracing.com will broadcast the entire race.

Dr. Wolfgang Ullrich (Head of Audi Motorsport): “Unfortunately we missed setting the fastest time by a very narrow margin and took positions two and three. After the previous free practice sessions we did a good job and clearly reduced the gaps. I’m hoping that we’ll be able to manage another small step on Sunday because our aim is to win the finale.”

Ralf Jüttner (Technical Director Audi Sport Team Joest): “The three best cars in the field simultaneously started their chase for times. Allan McNish’s first lap was superb. I’d have hardly thought it possible for us to achieve such a time. With that, we were initially running in front. But Alexander Wurz in the Toyota improved by two tenths of a second, which put him one tenth ahead of Allan. André Lotterer had some minor difficulties on his first lap. The gaps are a little smaller than expected. That’s why I’m confident for the race.”

Tom Kristensen (Audi R18 e-tron quattro #2): “After optimizing our car for the race in practice in dry, damp and wet conditions, exactly one fast lap counted in qualifying. Allan achieved a really good time on it. On this track with its different types of turns and the resulting compromise for the set-up, that was anything but easy.”

Allan McNish (Audi R18 e-tron quattro #2): “It was a good qualifying session and it’s nice to be on the front row. The gap to Toyota is small. The car had good balance and I was able to make perfect use of the tires. I’m pleased with our performance. I’m happy for Audi Sport Team Joest plus the fact that we’re in contention for the title through to the end. But I’m also aware of the fact that the race won’t be easy.”

Marcel Fässler (Audi R18 e-tron quattro #1): “Third place doesn’t mean the end of the world. The deficit of three tenths of a second isn’t large. We’re now starting on the inside of the track which isn’t bad with respect to the first turn. The race will last for six hours. It’s important that our pace is right. The times are close together. That’s why I’m optimistic.”

André Lotterer (Audi R18 e-tron quattro #1): “Qualifying was okay – we managed to clearly improve the car compared with yesterday. The gap to Toyota isn’t very large, so I’m confident for the race. I’m not completely happy with my own performance because I made a small mistake in turn 14 and the front right wheel locked. That cost me some time when the tires were working at their best.”

Benoît Tréluyer (Audi R18 e-tron quattro #1): “Since Saturday morning we’ve achieved a pretty good set-up for our car. Unfortunately, on his first lap in qualifying, André made a small braking mistake. But qualifying isn’t so important. The crucial part is that we’ve got a good car for the race. And it looks like that’s exactly what we’ve got. That’s why we’re confident for tomorrow.”