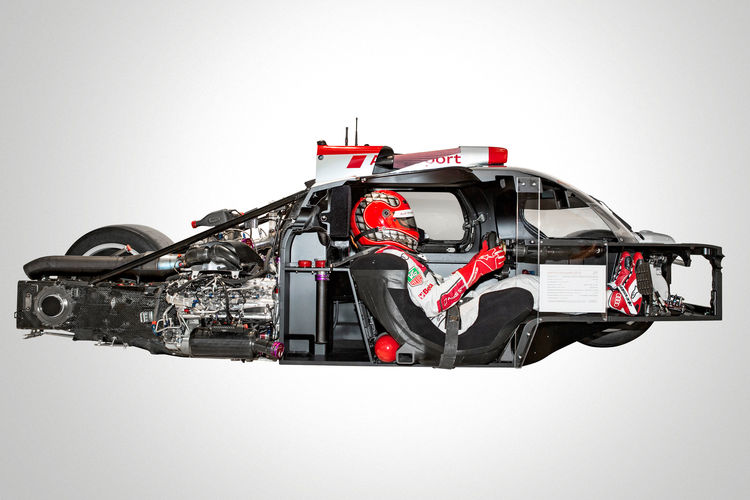 Eleven victories at the Le Mans 24 Hours, ten successes at the Sebring 12 Hours, nine titles in the American Le Mans Series – and now Endurance World Champion as well: No other automobile manufacturer has shaped the sports prototype scene in the last decade the way Audi has. With technical innovations and the further development of hybrid technology, Audi is aiming to defend its lead.

With the Audi R18 e-tron quattro, the brand with the four rings achieved the first triumph of a hybrid race car at the Le Mans 24 Hours. In addition, Audi won the new FIA World Endurance Championship (WEC) and is thus the first World Champion in history with a hybrid sports car.

In 2013, Audi is competing in the World Endurance Championship as the title defender. Audi Sport Team Joest will be fielding two updated Audi R18 e-tron quattro cars, a third R18 e-tron quattro will be running at the Le Mans 24 Hours and the WEC race at Spa.

At Le Mans and in the WEC, Audi is thus exclusively banking on hybrid technology that was successfully introduced in 2012. The flywheel energy storage system is becoming even more powerful without any substantial increase in weight and size. Strictly in terms of its exterior, the Audi R18 e-tron quattro will hardly differ from this year’s winning car although numerous technical innovations are again assembled under the vehicle’s ultra-light carbon fiber skin. In a parallel project, Audi Sport is already intensively working on the successor car for the new LMP1 regulations that will come into effect as of 2014.

“For Audi Sport, it was a major feat to develop a hybrid race car in a very short period of time and to immediately bring what was a completely new technology for us to success at Le Mans and in the WEC,” says Head of Audi Motorsport Dr. Wolfgang Ullrich. “But the challenge we’re facing now is just as great: on the one hand, we want to be successful again in the WEC in 2013. And on the other hand, the development of the new R18 for 2014 already ties up a lot of capacities.”

In addition to the commitment in the WEC, an entry of the Audi R18 e-tron quattro in the 12-hour race at Sebring (Florida) on March 16, 2013 is being considered. “It looks like this may be the last opportunity to compete with an LMP1 car at Sebring,” says Head of Audi Motorsport Dr. Wolfgang Ullrich. “We’d really like to use this chance and say goodbye to the fans with a nice showing after our fantastic success story in recent years.”

A victory at Sebring in March 2012 marked the beginning of Audi’s successful season in the FIA World Endurance Championship. Dindo Capello, Tom Kristensen and Allan McNish triumphed on the occasion of the Audi R18 TDI’s last run. In the 6-hour race at Spa-Francorchamps, Romain Dumas, Loïc Duval and Marc Gené prevailed in the new Audi R18 ultra. Marcel Fässler, André Lotterer and Benoît Tréluyer at the wheel of the Audi R18 e-tron quattro won at Le Mans, Silverstone and Bahrain, and in the end secured the WEC drivers’ title with a narrow margin in front of their team-mates Tom Kristensen and Allan McNish.

R18 TDI, R18 ultra, R18 e-tron quattro: Three different versions of the successful R18 celebrated victories in the 2012 season. In 2013, Audi Sport is fully concentrating on the hybrid version that brings together elements of all three R18 variants: the compact V6 TDI engine, ultra-lightweight design and e-tron quattro – the combination of a conventional drive system with an electrically powered front axle.