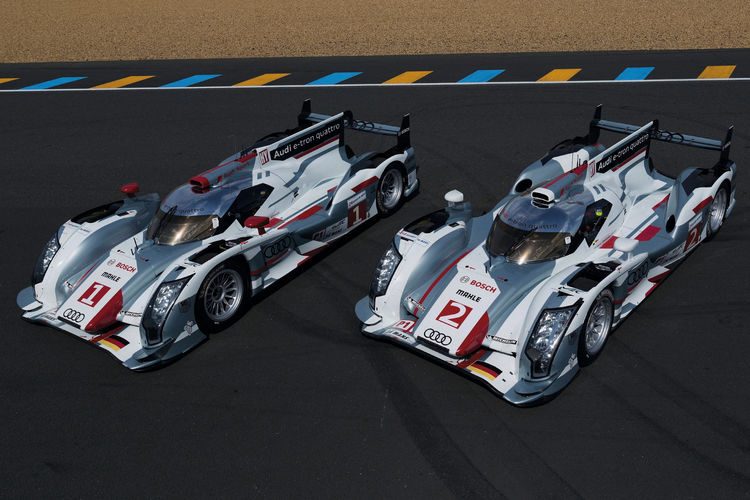 In the FIA World Endurance Championship (WEC), the two Audi driver line-ups are fighting a thrilling battle for the title. As of the sixth of the season’s eight rounds in Bahrain on September 29, a new strategy will guarantee absolute equality of opportunity. Audi will start to compete with two hybrid vehicles to set the agenda for the future.
Download PDF (192 KB)
Facebook
Twitter
LinkedIn
WhatsApp

In the FIA World Endurance Championship (WEC), the two Audi driver line-ups are fighting a thrilling battle for the title. As of the sixth of the season’s eight rounds in Bahrain on September 29, a new strategy will guarantee absolute equality of opportunity. Audi will start to compete with two hybrid vehicles to set the agenda for the future.

Audi entered the 2012 endurance racing season with two different vehicle concepts. The Audi R18 ultra makes full use of the potential of a conventionally powered LMP sports car with a TDI engine whereas the R18 e-tron quattro as the brand’s first hybrid race car rang in a new era. That both concepts have their particular fortes was obvious on several occasions. While the R18 e-tron quattro made history by achieving the first victory of a hybrid vehicle at the Le Mans 24 Hours and subsequently won the 6-hour race at Silverstone, the R18 ultra managed to score a debut victory at Spa. With the better grid position and fastest race lap by Lucas di Grassi at the fifth round in Brazil, the conventionally powered TDI sports car proved its potential through to the most recent event.

There are good reasons for the change in strategy nonetheless. Whereas the R18 ultra has always been very competitive on a single lap, the R18 e-tron quattro has notable advantages in certain topographic track conditions and when lapping other cars in traffic. As Audi is convinced of the future of hybrid drive, the engineers are now starting to fully concentrate on the development of the race car with an electrified drive system. In addition to the experiences that can be gathered for the future during the second half of the season, this decision assures perfect equality of opportunity. Marcel Fässler/André Lotterer/Benoît Tréluyer, after scoring two victories this season in the number “1” R18 e-tron quattro, are leading the WEC drivers’ standings. With 78 points yet to be awarded, Tom Kristensen/Allan McNish trail by only 7.5 points. The Danish-Scottish driver duo of car number “2” is returning to hybrid drive in Bahrain after having run twice before in the R18 e-tron quattro, at Spa and Le Mans.

For Audi Sport Team Joest, this involves a challenging task, which thanks to Audi’s uncompromising commitment to the shared components principle is made considerably easier. After transporting the race cars from South America, the number “2” Audi R18 will be converted from a conventional to a hybrid drive and the body will receive completely new graphics.

In Bahrain, the teams can expect to find unusual overall conditions. The race is held in the middle of the desert on the Sakhir circuit south of the capital Manama. Extreme temperatures, high humidity and sand particles mean tough conditions for the drivers and the cars. For the Audi factory drivers and Audi Sport Team Joest, the track in the island state is new territory. The sixth race of the season is scheduled from 4 p.m. to 10 p.m. local time and will thus take place mostly during hours of darkness.

Like at all WEC rounds, Audi is offering comprehensive coverage to the spectators at home: www.audi-liveracing.com will broadcast the race for six hours on the internet and also offer cockpit camera perspectives and summary reports of the race. The Audi Sport iPhone and Android apps provide WEC coverage on smartphones with live tickers, news, pictures and results. In addition, Audi’s racing fan community is kept up to speed on Facebook and Twitter.

-How will the competition between Audi and Toyota develop?
-How well will Tom Kristensen/Allan McNish fare on returning to the Audi R18 e-tron quattro?
-Which team will do the best job of coping with the desert heat?
-Will the close battle for the drivers’ world championship produce a change?

Dr. Wolfgang Ullrich (Head of Audi Motorsport): “We decided to compete with two hybrid vehicles in Bahrain. Our analysis has shown that we’ve got an advantage in traffic with the R18 e-tron quattro. It makes it easier for our drivers to overtake other vehicles. This means that with two hybrid vehicles we’re in a better position in the battle with Toyota. At the same time, we’re giving both our driver teams identical material in the battle for the title. Bahrain will be a completely different race than the previous rounds. We’re expecting very high temperatures. Unlike the most recent round in Brazil, Bahrain also takes a high toll on the brakes, which require good cooling. Handling the tires will be crucial too.”

Ralf Jüttner (Technical Director Audi Sport Team Joest): “In Bahrain, we’ll hopefully manage to get revenge for the race in Brazil. We’ll leave no stone unturned to return to the top of the podium. A desert race is a new experience for all of us. In addition, we’ve got to convert car number “2” into an e-tron quattro on location. That’s a huge task for the team. It’ll make the close battle for the drivers’ world championship even more exciting because it leads to greater equality of opportunity. We’re looking forward to this.”

Marcel Fässler (36/CH), Audi R18 e-tron quattro #1
-Continues to run with his two team-mates André Lotterer/Benoît Tréluyer
“I’ve never been to Bahrain. On TV, I’ve gained a very positive impression of the race track so far. There’s no doubt about one thing: it’ll be pretty hot. For us drivers, this means a high strain in the cockpit. Physical fitness will really be paying off there.”

André Lotterer (30/D), Audi R18 e-tron quattro #1
-Aims to extend the lead in the standings together with his team-mates
“I don’t know yet what’s awaiting us at the next race. I’m going to try out the track on the simulator and carefully memorize the layout. A new race track is always interesting and marks the next challenge for all of us. I’m happy about the chance to drive a race in this part of the world. Obviously, we want to finish on the top spot of the podium.”

Benoît Tréluyer (35/F), Audi R18 e-tron quattro #1
-Like his fellow Audi drivers is running in Bahrain for the first time
“We learned a lot in Brazil so that we can make the right decisions for the next race. This makes me very optimistic for the Bahrain Six Hours. As drivers, we’re challenged to get to know yet another track. As always, I’m going to prepare for it in the simulator. At this race, we’ll be in for very demanding overall conditions.”

Tom Kristensen (45/DK), Audi R18 e-tron quattro #2
-Is returning to a cockpit of an Audi R18 e-tron quattro
-After Lucas di Grassi’s wild-card run in Brazil is competing again as a duo with Allan McNish
“In Bahrain, a large number of challenges are awaiting us that we’re all looking forward to. It starts with the hot climate, but the desert sand and driving in darkness are special too. Allan and I are expecting a lot of the R18 e-tron quattro after we were able to make good use of the car’s strengths at Le Mans. That’ll hopefully help us in the battle for the title.”

Allan McNish (42/GB), Audi R18 e-tron quattro #2
-Is the runner-up in the drivers’ world championship standings together with his team-mate Tom Kristensen
-Has been to Bahrain several times but has never driven on the track there
“I think the race in Bahrain will be a lot different from our run in Brazil. With Le Mans, Silverstone and Interlagos, we’ve been experiencing a nice variety since June, and now something completely different is coming up again. Temperatures in the Middle East at this time of year can go up to 35 or 40 degrees. We’ll only be driving about an hour and a half or a maximum of two hours in daylight. But even when it’s dark the temperatures will hardly drop. I’m expecting a lot of the R18 e-tron quattro, which has been developed quite a bit further since Le Mans.”

The Audi drivers in Bahrain

Marcel Fässler about Bahrain: “I’ve never been on the grid in Bahrain before but the impression I’ve gained from the media tells me that the track has quite a few special characteristics. The start-finish straight is more than a kilometer long, followed by a hard braking maneuver in front of the narrow first right-hand turn. After a small left-hander, we enter the next long straight. Then there’s a a right-hand turn followed by a downhill section with a fast S-turn. The next short straight leads into a narrow right-hand turn. Then we drive uphill and into a long left-hand bend that consists of a faster plus a very narrow turn. On the back-straight behind the pit lane, we drive through a quick left-right sequence which is followed by a right-hand corner. It leads into the last long straight at the end of which a sharp right-hander takes us back to the start and finish.”