Audi at the Detroit Motor Show: powerful trio kicking off the new year 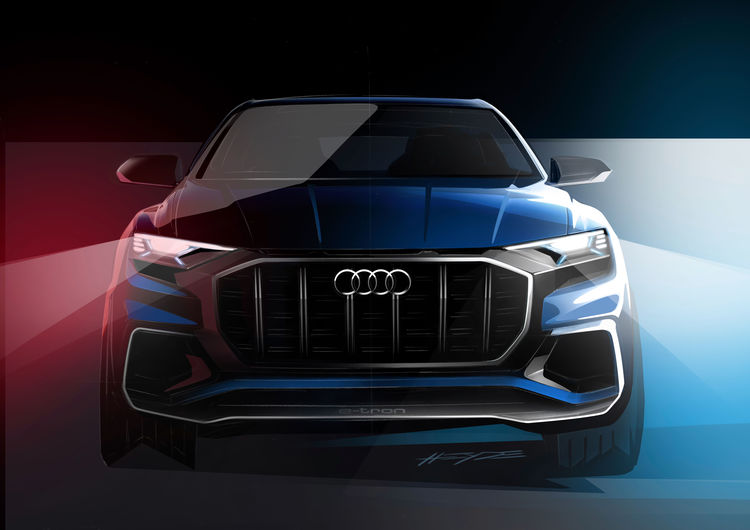 Audi is kicking off the new year with three highlights: with the Audi Q8 concept car, the premium carmaker is previewing a future production model at the North American International Auto Show (NAIAS) in Detroit. At the same time, the brand with the four rings is celebrating the world premiere of the Audi SQ5 TFSI* and publicly presenting the A5/S5 Cabriolet* for the first time.

A synthesis of coupé and SUV: the Audi Q8 concept
Unsurpassed prestige and sportiness – that’s what the Audi Q8 concept represents. It combines the typical spaciousness of an SUV with the emotional styling of a coupé. Audi is tapping into a new segment in the full-size category with this car. At the same time the brand is offering a preview of its future direction in design styling with the concept car. Many elements are reminiscent of Audi’s original Ur-quattro from the 1980s, including the exceptionally flat and wide C pillars as well as the powerful, flared shoulders over the wheels. Despite the flat roofline, the show car offers plenty of room for four people as well as lots of luggage. Widely stretched lines lend the interior a sporty as well as elegant ambiance. The new control concept relies on large touchscreens, supplemented with an enhanced Audi virtual cockpit and a contact analogue head-up display that uses intelligent augmented reality technology to merge virtual indicators with the real world. For example, a navigation arrow will appear in the same position as an actual arrow on the street. The drive system and suspension feature high-end technologies from volume production. The powerful and highly efficient plug-in hybrid of the Audi Q8 concept provides total system output of 330 kW and 700 Nm (516.3 lb-ft) of torque. Power is delivered confidently to the road via quattro permanent all-wheel drive. Air suspension and ceramic brake discs round out the impressive technology package. The concept car is the basis for a production model that Audi will introduce into the market in 2018.

V6 power and superior dynamics: the Audi SQ5 TFSI
The sportiest variant in the new Q5 model line celebrates its world premiere with the debut of the Audi SQ5 TFSI at the Detroit Motor Show. The turbocharged three-liter V6 engine outputs 260 kW (354 hp) and delivers 500 Nm (368.8 lb-ft) of torque at just 1,370 revolutions per minute. With this, the top model accelerates from 0 to 100 km/h (62.1 mph) in 5.4 seconds.

The quattro permanent all-wheel drive supports dynamic driving behavior in combination with the smooth-shifting eight-speed tiptronic. The car’s agility is further enhanced with the optional sport differential that actively distributes torque between the rear wheels and the optional dynamic steering with variable ratios. Both components are integrated into the Audi drive select driving dynamics system – as are the engine, tiptronic and standard-equipment damper control. This allows drivers to adjust the characteristics of their SUV in multiple modes. Optional air suspension allows the driver to adjust the height of the suspension to the specific driving situation. Numerous design features and an expanded series equipment package set the Audi SQ5 TFSI apart from the base model. These include, among other things, S sport seats in Alcantara/leather, LED headlights and 20-inch cast aluminum wheels in a 5-double-spoke star design. The Audi SQ5 TFSI will arrive at German dealerships starting in mid-2017.

Open to intense driving pleasure: the Audi A5/S5 Cabriolet
Audi is completing the A5 family. Following the Coupé and Sportback, the brand with the four rings is presenting the new A5/S5 Cabriolet for the first time in Detroit. Its design is based on the sleek lines of the Coupé. The rear window is now flatter and emphasizes the sporty looks, as do the short overhangs and the long wraparound hood with power dome. The classic soft top delivers outstanding aeroacoustics and now has a convenience opening function: Just a quick pull of the switch is all it takes to open or close the soft top fully automatically – even while driving up to 50 km/h (31.1 mph). Also included in the new A5/S5 Cabriolet are the latest technical connectivity features and driver assistance systems. The quattro drive lends the midsize Cabriolet superb traction and dynamic handling. Adaptive dampers are available as an option. They are incorporated into the standard Audi drive select dynamic handling system and allow the driver to choose between a sporty or comfortable driving experience. New engines for the Audi A5/S5 offer powerful performance, with 190 hp in the 2.0 TDI and 2.0 TFSI, and 354 hp in the 3.0 TFSI. The new midsize Cabriolet will be in dealerships in Germany and other European countries in March 2017.

More information and photos of the individual models can be found in the Audi Media Center at www.audi-mediacenter.com/en/detroit-2017

** Figures depend on the tire/wheel sets used