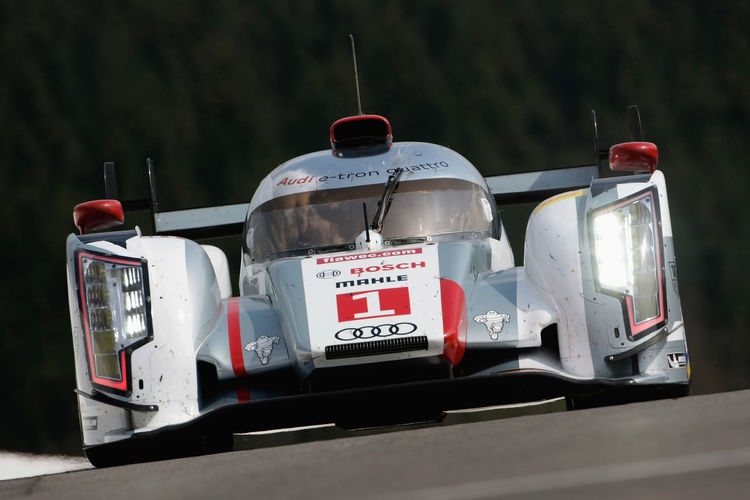 Six more weeks until the Le Mans 24 Hours celebrates its 90th anniversary. Since 1999, Audi has shaped the world’s most important endurance race like no other automobile manufacturer. Eleven victories in 14 events – the technological milestones set by Ingolstadt and Neckarsulm are unrivaled in Le Mans history.

The 24-hour race at Le Mans has accelerated numerous innovations since its inaugural event in 1923 – from disc brakes (1953) to turbocharging (1974), from the Wankel engine (1970) to carbon brakes (1990), from the Audi TFSI gasoline direct injection (2001) and the VTG turbocharger in Audi’s TDI engine (2011) through to the R18 e-tron quattro (2012). Ever since Audi has been involved in the most important endurance race, efficiency has acquired crucial importance – a core competency of the brand with the four rings.

Audi’s Le Mans tally underscores how the company has been performing forward-thinking work and breaking records in the process:

- In 14 events since 1999, Audi has achieved eleven victories, which equates to a rate of 78.6 percent. With that, Audi has advanced to second place on the all-time winners’ list. The current number one, Porsche, has clinched 16 victories – albeit spread over a period of 28 years since 1970.

- Porsche set a distance record in 1971. Afterward, due to track conversions with new chicanes, this record was regarded as nearly impossible to equal. In 2010, Audi broke this mark as well: The victorious R15 TDI, after covering a distance of 5,410.713 kilometers, surpassed the former best mark by 75.4 kilometers.

- All innovations by Audi are marked two common factors: They are efficient and have relevance to production cars – this applies to TFSI gasoline direct injection as well as to the TDI engine including the VTG (Variable Turbine Geometry) turbocharger, to quattro four-wheel drive, to e-tron hybrid technology, to ultra-lightweight design, to LED lighting technology and to numerous other detailed solutions.

- Right in the first decade of its program, Audi achieved impressive progress: From 2000 to 2010, fuel consumption dropped by more than ten percent although the average speed in the race increased from 208.6 to 225.2 km/h.

- The milestone of the first hybrid victory in 2012 was linked to another significant efficiency increase: Consumption dropped to 33.34 liters which – so Audi reduced it by another 10 percent when compared to the victory achieved a year before.

On June 22 and 23, on its 15th run at Le Mans, with three Audi R18 e-tron quattro cars, the brand with the four rings will be battling to take its twelfth victory – and to deliver proof of “Vorsprung durch Technik” yet again. The focus will be placed on continuing ultra-lightweight design, optimized aerodynamics, driver assistance systems, the matrix-beam headlight system and, of course, reliability and efficiency.

“No other automobile manufacturer has a track record of Le Mans technology and sporting successes that has been compressed into as short a time span as Audi has,” emphasizes Head of Audi Motorsport Dr. Wolfgang Ullrich. “Le Mans has been pointing the way to the future for a long time. The regulations promote innovations and the most efficient solutions like no other racing series does.”