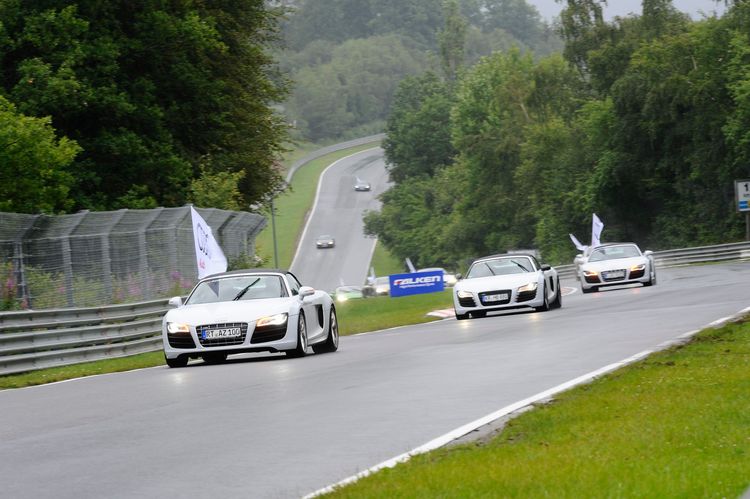 There was also a plenty on offer in the Eifel around the Audi factory entry during the 24-hour race at the Nürburgring.

Fans with a heart: an auction at the Phoenix store on the Ring Boulevard raised the princely sum of 3,200 Euro. In addition to a helmet and original race suit from Le Mans winner Marcel Fässler two bobby cars sporting the colors of the two Audi Sport Team Phoenix Audi R8 LMS sportscars were also auctioned. The proceeds go to the SOS-Jugendhilfe Hünstetten-Taunusstein.

Presence around the track: Audi was not only clearly evident on the grid at the 24 hours Nürburgring. All around the event 30 Official Cars ranging from the Audi A1 to Audi Q7 were available for the organizers.

Lawn art: alongside two new pit lane arches in Terminal look, two grassed areas in Audi look also grabbed attention at the 39th running of the endurance classic. The logos were produced by computer controlled painting robots at the Hatzenbach and Hohenrain track sections and were created in such a way that they are portrayed in the best possible way through the TV camera perspective.

Tantalizing exhibition at Audi Drive Away: no less than 50 examples of the Audi R8 – from R8 via the R8 V10, R8 Spyder to an R8 GT – completed a lap around the Nordschleife on Saturday before the race. Audi handed over the high-performance sportscars to dealers in the region. Immediately before the start of the race the brand new Audi R8 GT Spyder, presented two weeks ago at Le Mans, drove around the Nordschleife.

Electrified: Frank Biela and Marc Basseng each celebrated a race win in a slot car competition around the “Südschleife”. Miguel Molina, a slot car driver in his spare time, was also an enthusiastic visitor to the scale model race event.

Fan messages: Audi race experience requested fans send well wishes and greetings by Facebook. These were displayed using an LED device on the B pillars of the two Audi R8 LMS with start number “28” and “29”. The cars conjured up to eight messages per lap on Thursday during first qualifying in the Eifel night.