Links
{{ activeItem() }}
Twitter
09/19/20
.@loicduval says “the main issue was a small mistake in Turn 5” in Race 1 at the @nuerburgring. &gt;&gt;… https://t.co/36bpFPFdwH
09/19/20
.@JamieGreen_ calls Race 1 at the @nuerburgring a “chaotic nightmare”. &gt;&gt; https://t.co/RoNVUsOMgK… https://t.co/W9WhKpszni
09/19/20
“The race was very chaotic,” says Mike Rockenfeller after P9 in Race 1 at the @nuerburgring. &gt;&gt;… https://t.co/kbAvTjzQhk
09/19/20
“We had much more in the bag today,” says @nico_mueller who got spun around in Race 1 at the @nuerburgring. &gt;&gt;… https://t.co/xr2E2xVvrm
Audi Sport on Twitter
{{ activeItem() }}
Facebook
09/19/20
Now live with Jamie Green from his motorhome at the Nürburgring! Find out how today’s race went for the Brit and leave your questions in the comments. >> audi.com/DTM #PerformanceIsAnAttitude #ThanksToDTM
09/19/20
It’s that time again! We will be live with Jamie Green from his motorhome at the Nürburgring at 18:45 CEST. Join us for a cup of tea with the Brit and make sure to get your questions in for Jamie. >> audi.com/DTM #PerformanceIsAnAttitude #ThanksToDTM
09/18/20
Meet the team: Behind the scenes with the crew responsible for Robin Frijns’ Audi RS 5 DTM. >> audi.com/DTM #PerformanceIsAnAttitude #ThanksToDTM
09/17/20
From being locked in the bathroom just before qualifying to smashing your private laptop in your race car. Get to know the 2 teammates René Rast and Jamie Green a little better. >> audi.com/DTM #PerformanceIsAnAttitude #ThanksToDTM
Audi Sport on Facebook 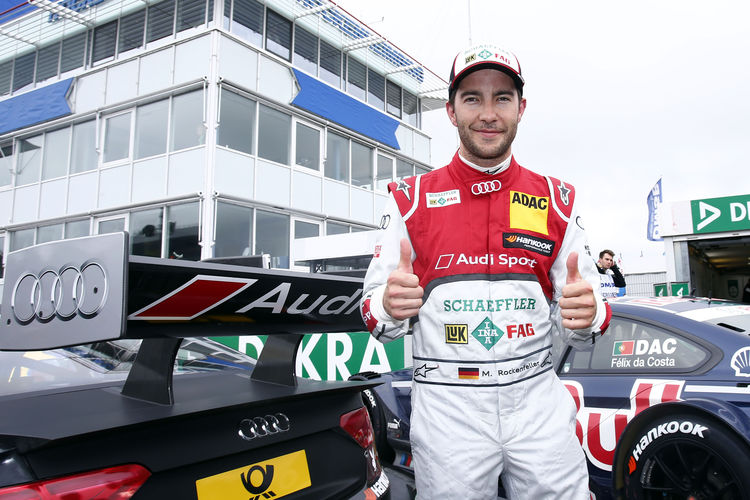 The second race of the season and the second pole position for Audi: In an extremely thrilling time chase on a drying track, three Audi drivers were the fastest at Hockenheim on Sunday: Mike Rockenfeller, Miguel Molina and Mattias Ekström

“My car was fantastic to drive right from the beginning. I knew that the last lap would be crucial, fortunately, it all worked out,” said Mike Rockenfeller (Schaeffler Audi RS 5 DTM/Audi Sport Team Phoenix) following a turbulent qualifying session that initially started on a wet track. But after just a few minutes, the racing line had dried off so much that all the drivers switched to slicks and the track became faster and faster.

In the crucial moment, Mike Rockenfeller, by a razor-thin margin of 0.030 seconds, prevailed against Miguel Molina in the Teufel Audi RS 5 DTM of Audi Sport Team Abt Sportsline. Molina’s team-mate Mattias Ekström in the Red Bull Audi RS 5 DTM completed the one-two-three for Audi.

Saturday’s winner Jamie Green in the Hoffmann Group Audi RS 5 DTM had to settle for position 19. “I was blocked by Maxi Götz,” the Briton said. “It shows that in the DTM everyone is starting from scratching again on Sunday,” commented Mike Rockenfeller. “This is great for the fans. I’m enjoying the moment and hope for a good race.”

The second race of the new DTM season will start at 13.43. ARD will start to air live coverage at 13.20 (local time) on ‘Das Erste.’ Additional ‘second screen’ information will be available on dtm.com/live and bild.de.

Notes for editors: Miguel Molina will be dropped three places on the grid due to a penalty from race one.