A word from … Lucas di Grassi 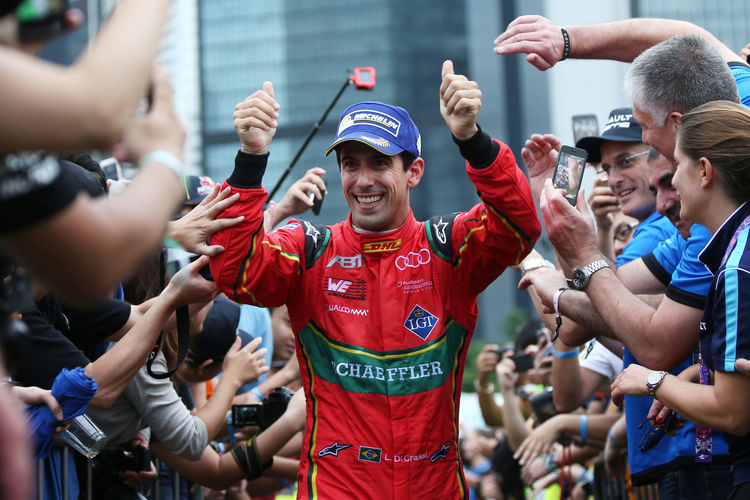 The Audi factory driver produced a fantastic comeback drive that saw him move from 19th on the grid to finish on the podium in the opening round of the Formula E season in Hong Kong.

A furious opening to the season: “From zero to hero.” After messing up qualifying and an accident at the start, have you ever been happier at the end of a race?

Obviously I’m delighted. But what happened in the race has nothing whatsoever to do with luck. We saw our opportunity when the safety car was deployed. It was actually too early to change car, because this meant a load of laps with the second car – more than we had planned. I saved energy wherever I could and with a very conservative driving style that exploited every Joule. I never thought that it would be possible, but we quite literally squeezed everything out of the car – and the result was second place at the flag. Great! This shows once again that as a team we just don’t give up. Races like these – or also that in Le Mans this year – show that it’s never over until the checkered flag waves. A big thank you today also to my team and my mechanics who made this possible.

How do you rate the opening race of the Formula E season in Hong Kong?

Hong Kong is a breathtaking city for Formula E – I can’t imagine a better start to the new season. We received a huge amount of attention from the media and the fans in this megacity. Everybody in the city knew about the event and applauded us. The Emotion Club in the paddock was sold out, as well as the grandstands, and there was a party atmosphere at the podium – it wasn’t just a fantastic opener for me, but also for Formula E.

Manufacturer interest is increasing. After Audi, also Jaguar, BMW and – as option – Mercedes have stated their interest. From where does the interest shown by the ‘big’ manufacturers come from?

Motorsport has always had a relationship with development and the goals of the automobile industry. The manufacturers increasingly align themselves with electric mobility. And for this reason it is only logical that they come to Formula E and produce electric drivetrains. Furthermore, Formula E as a race series has become very popular and professional after a very short period of time.