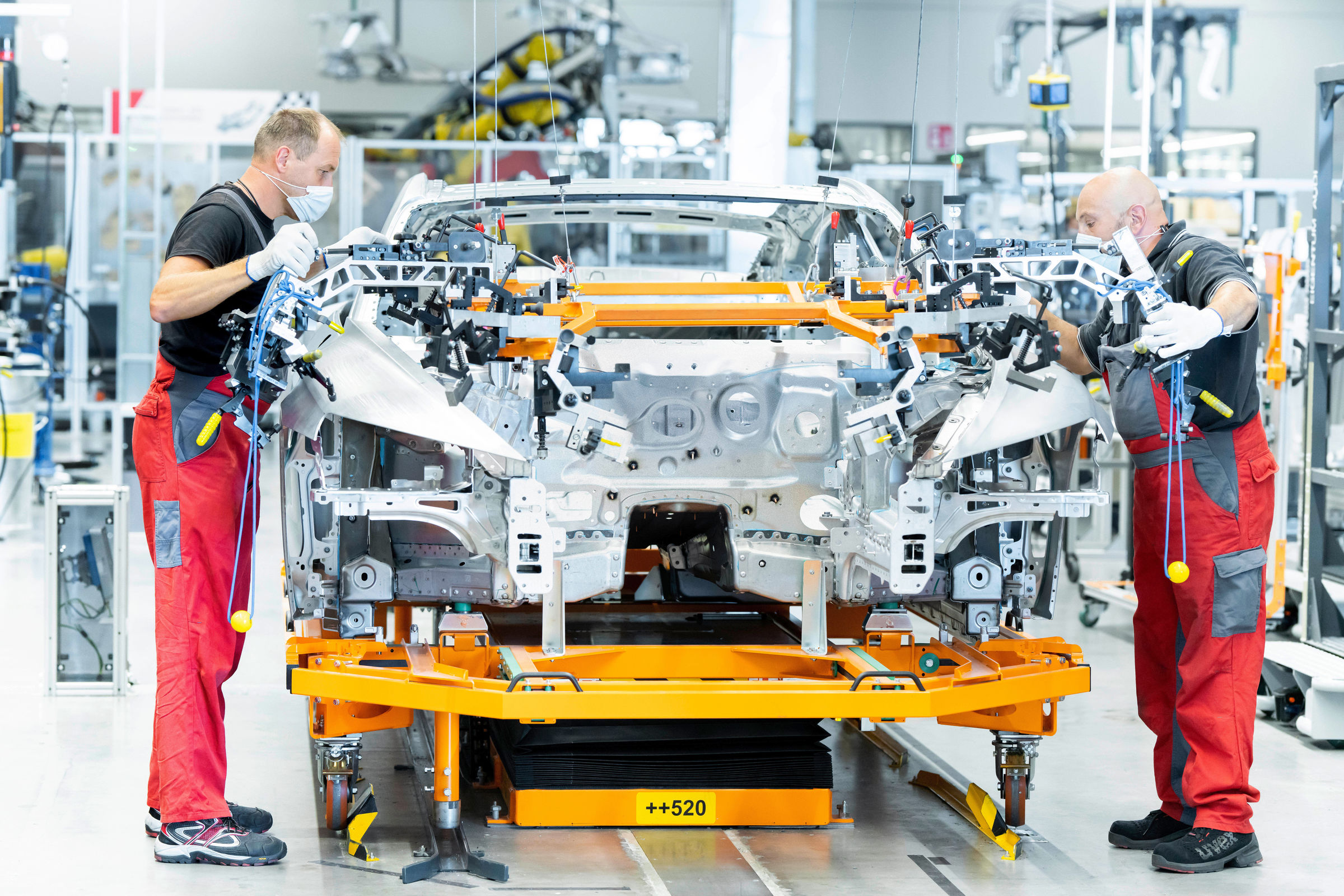 The e-tron GT is the first fully electric car from Audi to be built in Germany. It rolls off the line at Audi Böllinger Höfe at the Neckarsulm site. The small-series production facility there has been expanded and converted for its new role. The skilled craftsmanship of the previous facility has been supplemented by digital processes and smart technologies. During the expansion, production planners made use of new virtual methods. Production of the e-tron GT was designed without physical prototypes – a first at Audi.

The body shop combines the skilled craftsmanship of the employees with the full potential of automated production technology. It consists of an innovative body assembly line along which each body passes twice. It is constructed around what is called the two-way framer, in which ten robots are used to attach the inside and outside of the passenger compartment. It combines all manufacturing steps for joining the side panels in a single system, allowing the Audi e-tron GT to be manufactured on the existing floor space. What is known as the correlation-free inline measuring procedure for the bodies is also new. It guarantees even greater accuracy and can respond very quickly to minute deviations. At the end of the body assembly line is where precise craftsmanship comes into play: Experienced workers fit the add-on parts and check the completed body.

The e-tron GT shares the assembly line with the Audi R8 high-performance sports car – this integration of two technically completely different cars is unique in the Volkswagen Group. The expanded assembly line includes 36 instead of the previous 16 cycles. Both models are moved using the same driverless transport vehicles and an electrically powered monorail system, with humans and robots working side by side at one station of the line. Once completed, every car is driven for 40 kilometers (24.9 mi) on public roads, which also includes sections on the highway and in urban traffic.

The production of the Audi e-tron GT quattro and the RS e-tron GT at Böllinger Höfe is carbon-neutral. Just as at the entire Neckarsulm site, production uses 100 percent eco-electricity, with a combined heat and power plant fired with biogas providing the necessary heat for Böllinger Höfe. Emissions that cannot yet be avoided are compensated with carbon credits from certified climate protection projects.

Audi also relies on resource-conserving vehicle manufacturing. This way, production at Böllinger Höfe avoids the use of paper and packaging and uses closed-loop systems, for example. The aluminum sheet waste that accumulates in the press shop, for example during the production of the side wall frame, is returned to the supplier, where it is reconditioned and then reused at Audi. Audi has launched a pilot project for plastic recycling. Plastic waste is processed into fibers, and these filaments are then used in 3D printers to manufacture tools for the production process.