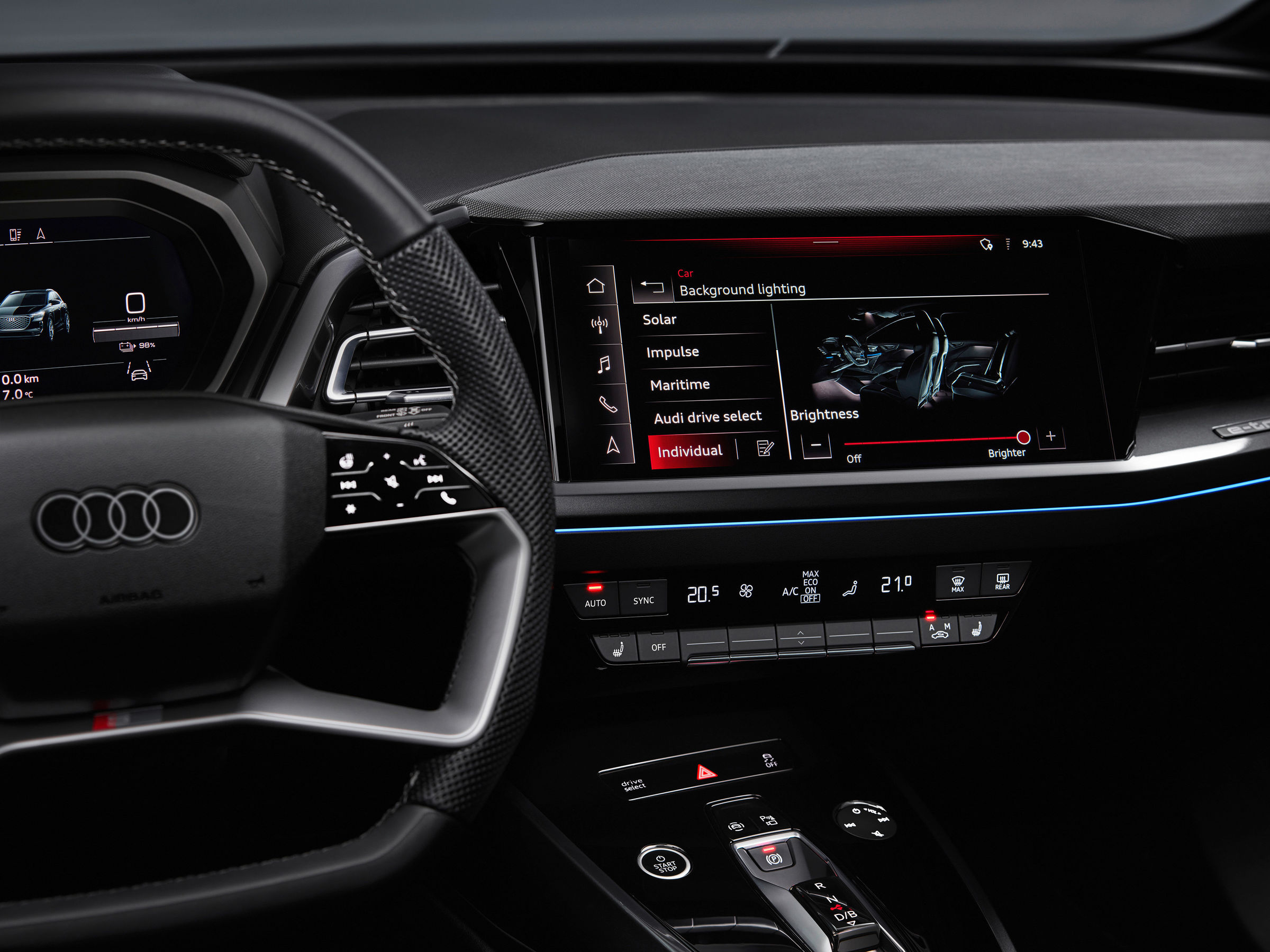 The infotainment offering in the Audi Q4 e-tron and the Q4 Sportback e-tron is designed with three levels: MMI, MMI plus, and MMI pro. At each level, the powerful MIB 3, the control center for media, telephony, and navigation, serves as the technical backbone. The MMI basis system installed as standard brings with it a DAB+ tuner and the 10.1-inch MMI touch display. The free myAudi app connects the car with the customer’s smartphone.

The MMI plus version brings the Audi virtual cockpit, the 11.6-inch display (anticipated late 2021), a Wi-Fi hotspot for passenger devices and the basic services of Audi connect Navigation & Infotainment on board the compact electric SUV. These also include online traffic information. The navigation system gives the driver destination suggestions and provides lane-specific information on the traffic flow. The computation is carried out on the servers of the service provider HERE using predictive data about the overall traffic situation.

Another customized Audi connect service is the e-tron route planner, which calculates the fastest route with as few charging stops as possible at powerful DC charging terminals. While doing so, it calculates the overall travel time – driving time and charging time – and takes into account forecasts about how the traffic situation is developing. The directory of charging points is updated every day.

The top-of-the-line version MMI pro brings the Audi virtual cockpit plus, the Audi smartphone interface with wireless connectivity, and the augmented reality head-up-display into the car. Added to these are the “plus” services of Audi connect Navigation & Infotainment, including navigation with Google Earth™, online speech entry, the online radio, and the hybrid radio.

Individually available hardware components make the infotainment offering in the Q4 e-tron even more interesting. As a new and exclusive partner of Audi, the world’s leading sound experience company Sonos supplies the premium sound system. It is incorporated into the Audi soundCube, a fully integrated software environment. It forms an audio system architecture that can be easily adapted to all requirements and can integrate sound systems of different suppliers effortlessly. The Audi soundCube implements a uniform control and sound philosophy across the entire model range. Thanks to its flexibility, it leaves room for customers’ wishes.

In the Q4 e-tron and the Q4 Sportback e-tron, the Sonamic Panorama algorithm, which was developed by the Fraunhofer Institute, distributes the signals to ten loudspeakers. It uses stereo recordings to generate a three-dimensional surround sound, where it places the individual sound sources on a virtual U-shaped sound stage. This gives the listener the impression they are sitting in the middle of the orchestra or band. The four tweeters and the center speaker are driven by an amplifier that is integrated in the MIB 3. A separate eight-channel booster is responsible for the four bass loudspeakers and the subwoofer in the luggage compartment. Together, the two amplifiers offer an output of 580 watts.

Another attractive hardware module is the Audi phone box. It charges smartphones inductively and allows data transfer via the vehicle’s antenna at LTE advanced speed.