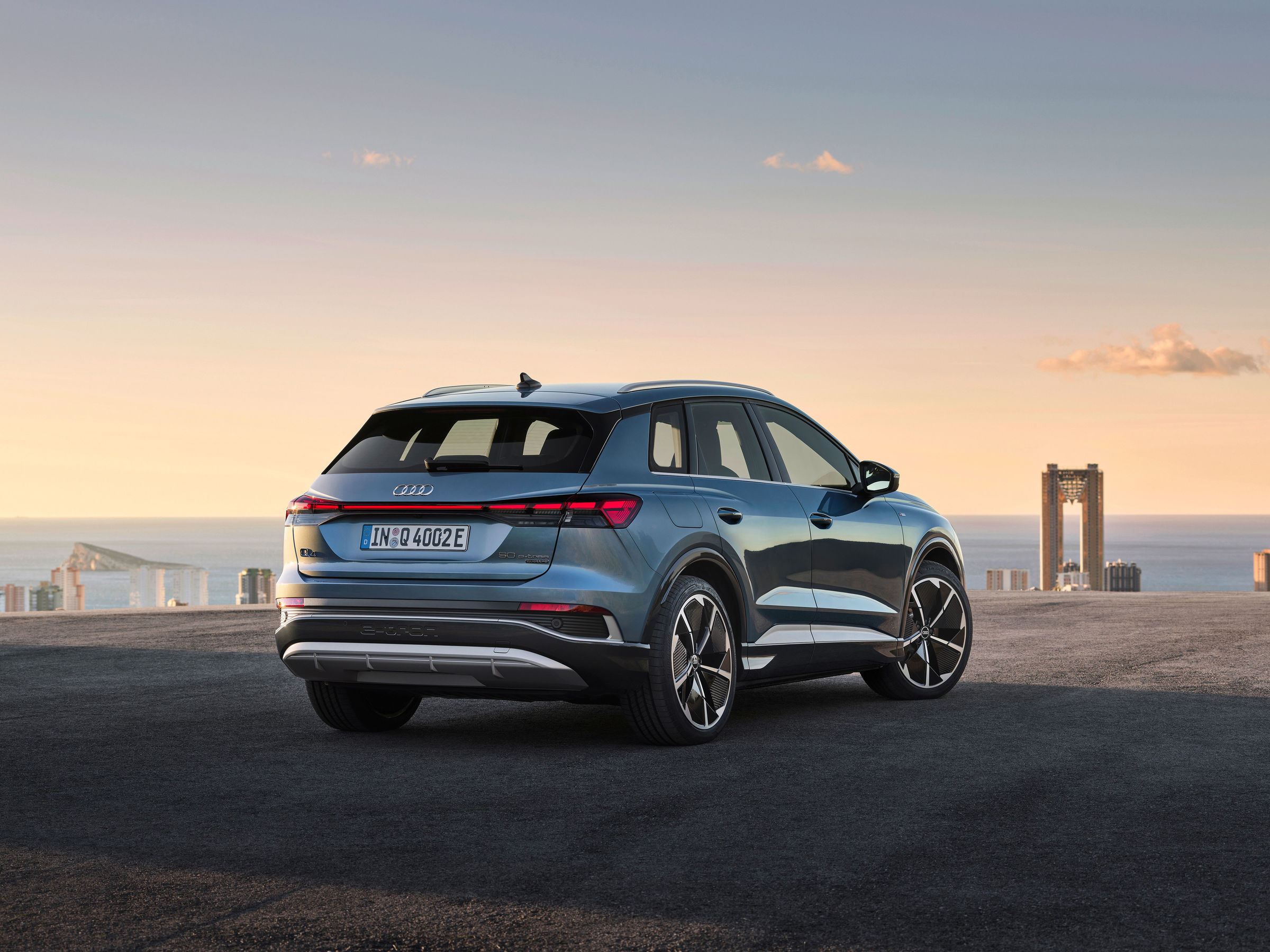 The electric offensive at Audi continues to pick up steam. The large SUV models e-tron and e-tron Sportback as well as the sporty e-tron GT quattro and RS e-tron GT are now followed by the Q4 e-tron and Q4 Sportback e-tron. The two new models play a central role in the brand’s electrification strategy, as they are being launched in a market segment that is experiencing especially quick growth – the compact SUV class. For Audi customers, they offer an attractively priced entry point into the world of premium electric mobility.

A powerful body, a high front, an expressive rear section – the Q4 e-tron and the Q4 Sportback e-tron exude a strong presence, they announce themselves as electric Audi SUVs at first glance. The two compact electric SUVs bring the progressive design that the brand introduced at the beginning of 2019 with the Q4 e-tron concept and the Q4 Sportback e-tron concept to series production and represent the next step in the design language of the electric Audi models. Its sporty character emerges from the striking proportions – thanks to short front overhangs, large wheels, a broad track and powerfully toned muscles. All lines are drawn with the maximum precision, and the surface treatment has a clear, pared-back effect.

The high, upright front symbolizes the robustness and strength of the Audi Q4 e-tron and the Q4 Sportback e-tron. Their dominant element is the large Singleframe – with its eight corners, it is characteristic of an SUV from Audi. A new feature that is typical for electric vehicles is the enclosed Singleframe and the inverted color design: The chrome frame is bordered by a wide mask in a dark contrasting paint finish, a structured surface with horizontal inserts forms the insert for the radiator grille. The Four Rings integrate various sensors as a full-surface element which then disappear behind the brand logo – a new feature at Audi. A powerfully contoured, curved blade extends under the Singleframe, running sharply up at the ends.

When viewed from the side, the unusually flat A-pillars catch the eye – and provide the entire greenhouse with an elegant flow. The roofline stretches low over the body, ending on the Sportback in a long D-pillar. The third side window rises up in an opposing direction – a typical feature of the Sportback. The top of the window points toward the spoiler, which sits on the lower section of the split rear window. On the Q4 e-tron, which has a roof edge spoiler that finishes off the powerful D-pillar, a black insert strip runs across the whole of the roofline. It separates the rear end of the roof visually from the rest of the body and makes it appear to float – an effect that accentuates the sporty character of the vehicle.

The sides of both electric SUVs feature taut contours. In both models, the external mirrors sit on the door rail in the style of a sports car. The doors feature overlapping horizontal edges that create an interplay of light and shadow. In the lower area of the doors, striking contours hint at the high-voltage battery pack, the vehicle’s beating heart. The muscular blisters, which extend across the wheel housings, highlight the wheels in a powerful expression and point to Audi’s quattro expertise. They feature a slightly softer and more flowing design than on the models with a combustion engine. The rear blisters run around the D-pillars and into the luggage compartment cover.

Horizontal lines emphasize the width across the whole of the rear section, while the raised diffusor creates a powerful, sporty accent. An e-tron logo is embossed in the bumper, another one in the Singleframe.

The color swatch for the Audi Q4 e-tron and Q4 Sportback e-tron contains eight colors. Their restrained character is inspired by the colors and hues found in nature. The solid paint color is called stone gray, the metallic shades are named aurora violet (new), floret silver, geyser blue, glacier white, mythos black, Navarra blue, and typhoon gray. Aurora violet is a color that has been taken from Audi Sport.

Audi supplies both models with the advanced and S line exterior lines as an alternative to the basic version. On the basic vehicle, the wheel arches, the lower section of the bumper, and the diffusor feature an anthracite grain, the gloss package accentuates the side windows. The Singleframe also differs depending on the line – on the S line, chrome elements lend it its own distinctive look. Here, and also in the advanced line, the lower add-on parts feature a contrasting paint finish in metallic Manhattan gray; in the optional full paint finish customers can choose between four colors, while there are also 19- and 20-inch aluminum wheels. The black styling package, which includes the black caps for the exterior mirrors, creates an even sportier appearance. The Four Rings on the Singleframe and the type designation are also available in black. A roof rail comes as standard on the Q4 e-tron.

The headlights of the Q4 e-tron and the Q4 Sportback e-tron are fully equipped with LEDs as standard. On request, Audi also offers the Matrix LED headlights – they lend the two electric compact SUVs a look that is full of character and unmistakable, day and night. The next stage of evolution in daytime running lights is totally new among the competition. Using the MMI touch operating system, the driver can switch between four digital light signatures at any time. Each of them generates its own theme and lends the daytime running lights an individual expression. The variant selected is activated the next time the vehicle is started.

The Matrix LED headlights are divided into two sections in terms of optics and technology. The completely black lower half conceals the units for the low beam and the Matrix LED high beam. The 16 individual LEDs that comprise it are regulated so that they always illuminate the road as brightly as possible without blinding other road users.

The upper half forms a bright eye. A flat segment runs across the headlights here, serving a dual function in generating a fixed daytime running light and the dynamic turn signals. Above and below it are a total of nine flat daytime running light segments, which, together with the large vertical anchor segment at the outer edge, can be configured into four digital light signatures. Two slat trims made of brushed stainless steel divide the digital daytime running light segments into 49 small sections. Seen from the side, they appear to be well shielded, lying one on top of the other like the slats of vertical blinds; the full power of the individual light segments is easily visible from the front – creating a fascinating effect that plays with light and shadows.

Striking taillight signature: the light strip at the rear

In combination with the Matrix LED headlights, there is also a particularly elegant light solution at the rear of the compact electric SUV. A light strip runs across its full width; at its center the taillight beams out in a fine line that splits into separate segments at its ends. Each individual segment is modeled as a three-dimensional body, resulting in a light sculpture that is expressive from all perspectives. The light signature opens up into a large light anchor segment on the sides of the vehicle. Its dynamic graphic is inspired by intricate electric circuits and bears the Four Rings radiating in signature red as the central detail. The dynamic turn signals add a further highlight in the reversing lights.

When the car is unlocked and exited, dynamic “leaving home” and “coming home” light sequences are played in the rear lights and the headlights. The sequences in the headlights vary depending on which daytime running light signature is selected.

Maximum precision as a principle: the toolmaking shop

The Q4 e-tron models fascinate with their expressive design from every angle and in every part. The complexity of the production can be illustrated by the side wall frame of the Sportback in its rear section. Major challenges converge here in a small area. At the top, the D-pillar runs into the side of the car, while the rear spoiler also starts in the opposite direction, and the blister extends further below with its tight radii and the deep undercut over the rear light. All of these curves and shapes are executed with a flawless surface finish and the highest level of precision.

Responsibility for this is attributed to Audi’s toolmaking shop – which transforms the emotional appeal into a metal body and the designers’ ideas into series production. The shop’s method planners take their seat at the table in the early phase of development and review the proposals to ensure they are feasible. In other areas, coordination and development are carried out in digital form on the computer. For the Q4 e-tron and the Q4 Sportback e-tron, the toolmakers from the two German Audi sites shared the work – the specialists from Ingolstadt took care of the side wall frames, the doors and the roof, and their colleagues in Neckarsulm handled the hood and the tailgate.

Highly complex function meets uncompromising precision and heavy metal in the toolmaking shop. The pressing dies for the side wall frames are cast iron giants – around 4.5 meters long, 2.4 meters wide and 1.35 meters tall and weighing up to 47 metric tons. Tens of thousands of hours of manual work have been invested and several hundred individual parts have been installed in them – from the filler and work sliders that weigh tons, the hold-down clamps and mold blocks, to the cutters and punches. It takes several months to set up one set of these massive tools.

When ready, the tools are first run with single-stage presses and then on the large transfer press lines – most of them initially at the Audi plant in Ingolstadt, before they are transported to the Volkswagen Zwickau plant, where the Q4 e-tron and Q4 Sportback e-tron are being built. Before that can happen, there are countless optimization loops that are often a matter of a few thousandths of a millimeter. Is there a tiny sink mark or an inadmissible increase in the curvature of the sheet metal part? Are the individual process steps causing any barely visible thinning or minute wrinkles? Modern optical measuring systems keep an exact record of everything – but they are still not always a substitute for a human’s keen eye, sensitive fingertips and sense of how the sheet metal is behaving in the press.

When series production is running, with the Zwickau press lines shaping the side panel frame at pressures of up to 1,600 metric tons, six production steps are needed. At each one, the component is machined by a specific tool, before grabs pass it on to the next tool. The first draws the sheet metal into the required form, the next tools make the cuts – for example in the area of the side windows, the fine edges and lines, the assembly holes, and the complicated undercuts – folds, and geometries on the inside of the metal sheets that are required for later connection in the body shop. Because the panel always has a slight tendency to spring back, it is also deliberately reshaped at each working step. The forming process starts with a flat blank and ends with a three-dimensional, high-precision component with an emotionally charged design.