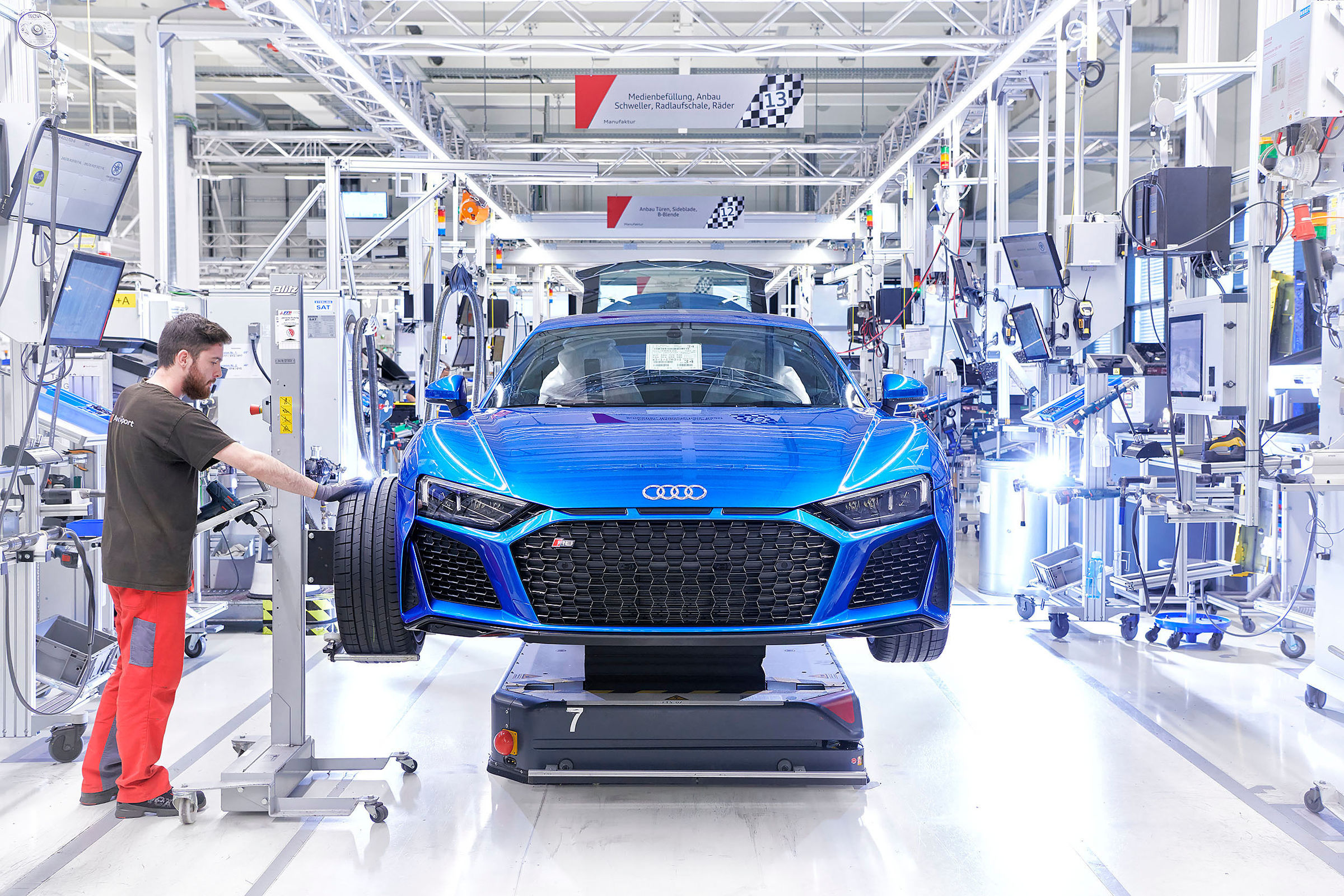 The Audi R8 is being produced under the responsibility of Audi Sport GmbH at the “Audi Böllinger Höfe” location in Heilbronn, near the Neckarsulm plant. As many as 500 highly qualified employees work in the body shop and assembly areas at the production site, which has 30,000 m2 (322,917 sq ft) of production floor area. Production is organized as a flexible production facility.

In the body shop, the initial focus is on the aluminum parts of the ASF. In the first step, experts weld the front body, center floor, and rear body together from cast parts and extruded sections. Then they join the three modules to create the substructure. Robots perform joining processes that involve cold joints such as rivets and screws, while workers execute welding tasks. The body continues to grow with the addition of the greenhouse and the roof. Humans and robots work closely together in installing the CFRP parts.

The finished body is transferred to the assembly area on a self-propelled assembly skid, which is known as a driverless transport system (DTS). The DTS utilizes high-power storage capacitors as its energy storage medium, and uses a laser scanner and RFID (Radio Frequency Identification) chips to navigate through the production floor areas. In the assembly area, which is laid out as a U-shaped chain, employees perform a large share of the work done by hand in 15 cycles.

Flexibility is a top priority at “Audi Böllinger Höfe.” In addition to the production vehicles, the employees also produce the R8 LMS racing cars in the body shop. Given the complex work procedures, this requires ongoing technology transfer from motorsports as well as a high level of qualification. The assembly area is also designed for quick modifications. The cars move through many areas of the hall on the DTS. There are no overhead conveyors or a classic “marriage” station. Instead, the drive unit and axles are preassembled and installed separately from one another.

Initial operation of the newly produced R8 is performed at the testing center and comprises six separate cycles. Afterwards, each new R8 must successfully complete a stringent quality approval lap on the plant’s own test track. After this, an approximately one-hour test drive that also includes freeway driving is conducted on public roads.