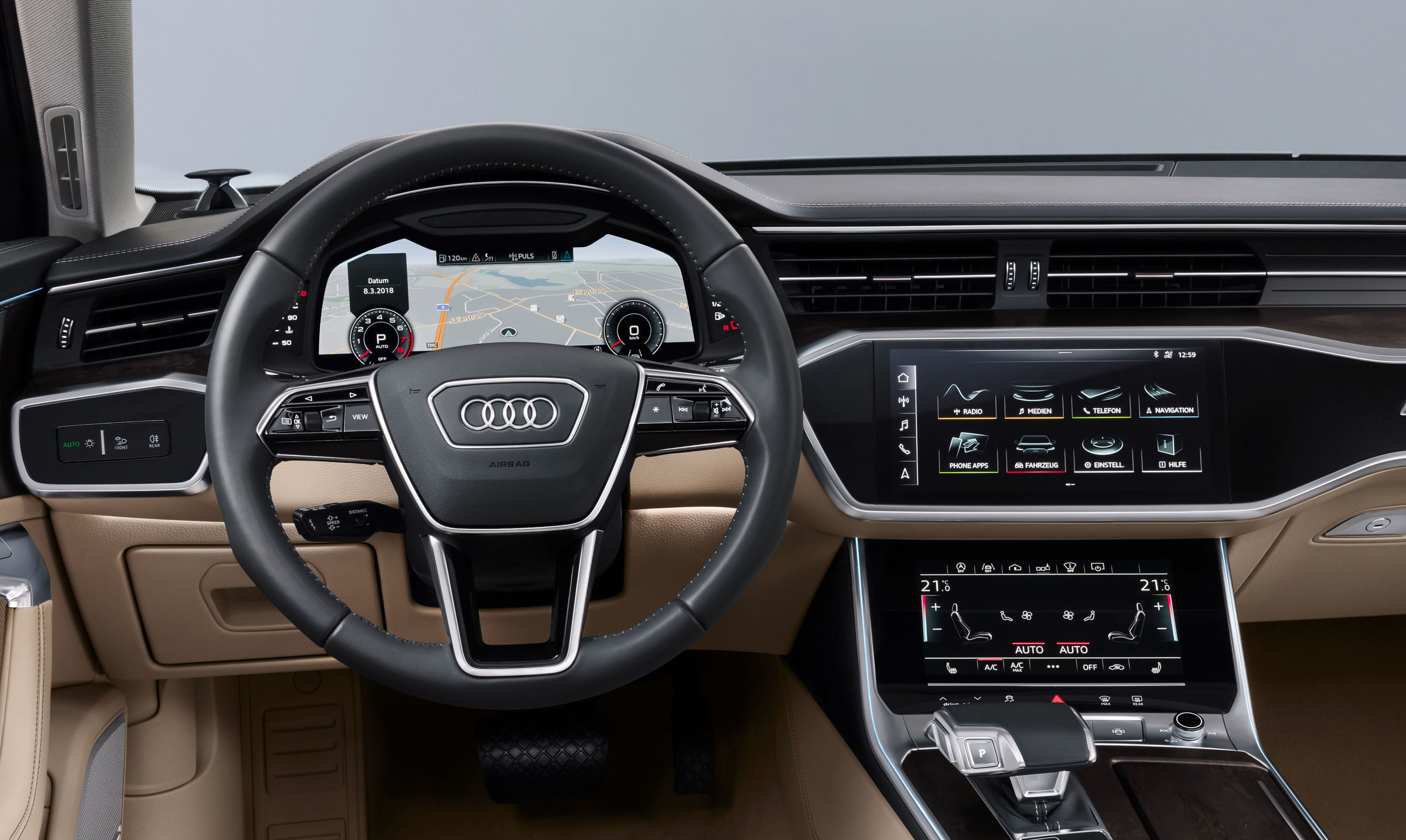 The new Audi A6 embraces digitalization like no other model in the premium class. Its all-digital, intuitive MMI touch response operating system, the wide range of infotainment components and the Audi connect services enhance comfort and safety for driver and passengers, while at the same time providing a high degree of customization.

In the A8 luxury sedan and in the new A7 Sportback, the MMI touch response operating concept is already in use; it is now also making its way into the A6: Two touch displays with tactile and acoustic feedback, both tilted toward the driver, replace the rotary/pushbutton control and most buttons and controls on the predecessor model.

The new concept is futuristic; it can be used and customized intuitively like a smartphone, and transfers Audi’s quality aspirations from the analog to the digital world. The top display, located centrally in the instrument panel, is used to control the infotainment. If the MMI navigation plus is specified, the display has a 10.1-inch screen diagonal. The bottom display measures 8.6 inches and is located on the center console. The driver uses it to manage the climate control, the convenience functions and text input; the driver’s wrist can sit comfortably on the selector lever of the automatic transmission. MMI search is based on free text input. If the driver is, say, looking for a restaurant, a list of hits appears after just a few letters.

On both MMI touch response displays the graphical user interface features a clear design so that the customer can assimilate the information quickly. The menu structure remains flat; on the top display users can adjust the start screen icons, similar to smartphone apps, in accordance with their personal preferences. The operating tiles can be moved to the required location on the screen by means of drag-and-drop and various favorite buttons created on the left-hand edge of the screen.

For other frequently used functions, the driver can also create shortcuts in the bottom screen and access various vehicle functions directly. These include radio stations, contacts from the phone book or apps.

The voice control, standard in the new Audi A6, is based on natural language voice control, allowing the user to talk almost freely. The system responds to commands and questions in two ways: from the information on preferred destinations and media stored on board, and, in conjunction with MMI navigation plus, also with knowledge from the cloud. The online information tends to be more comprehensive, the onboard information can be accessed quickly and reliably – even in locations where there is no mobile communications network.

MMI navigation plus also includes the Audi virtual cockpit onboard the new Audi A6. The all-digital instrument cluster measures 12.3 inches in diagonal and offers Full HD resolution of 1,920 x 720 pixels. The driver operates it via the multifunction steering wheel and is able to choose between the classic view and the infotainment mode. In addition, the head-up display projects important information, including a junction zoom function, onto the windshield. The information projected onto the 22 x 8 centimeter (8.7 x 3.1 in) visual window appears to hover more than two meters (6.6 ft) in front of the windshield.

In the new A6 up to six drivers and one guest can store their preferred settings in individual profiles. This personalization runs to some 400 parameters – from the climate control, navigation destinations, through to preferred media. The automobile recognizes the particular user on the basis of the key signal and activates the associated individual profile automatically.

In both infotainment systems, the navigation offers a host of innovations. The self-learning navigation provides the driver with suggestions on the basis of driven routes, taking into account time and traffic congestion. The calculation of the drive routes is performed online on the HERE servers, which incorporate data from the overall traffic situation. If the data connection is interrupted during the journey, the navigation switches to the onboard route guidance that runs in the background. The map features a new texture. Each year there are four free map updates, optionally supplied over-the-air to the car.

MMI navigation plus brings other services onboard: navigation with Google Earth, online radio and hybrid radio, which automatically switches between FM, DAB+ and web channels. The map shows detailed 3D models of many major cities.

Owners of the new Audi A6 can use the MMI touch response on a smartphone to access the brand’s digital ecosystems; services such as myAudi navigation or the calendar are transferred seamlessly to the car. The Audi connect key, a top-of-the-line option in the new A6, lets the driver lock/unlock the vehicle, and start the engine using an Android smartphone via near field communication (NFC).

The Audi phone box is also tailored to the owner’s smartphone – it links the smartphone to the vehicle’s antenna and at the same time charges the phone inductively. Voice over LTE, an additional function, provides rapid call setup and enables the simultaneous use of high-speed data transmission and high-definition online voice telephony (HD Voice).

The customer can choose from four sound systems in the A6. MMI navigation plus also includes the Audi sound system. Alternatively, customers can choose the Bang & Olufsen Sound System with 3D sound in the front and the Bang & Olufsen Advanced Sound System with 3D sound in the front and rear. The top-of-the-line system, which produces a total output of 1,820 watts, includes 19 loudspeakers. Two loudspeakers in the A-pillars and in the roof line respectively introduce the spatial dimension of height. Drives for CDs and DVDs, tuners for digital radio and TV (with CI+ module), the Audi smartphone interface as well as the Audi tablets for the rear complete the program.