Zandvoort premiere for the Audi A5 DTM 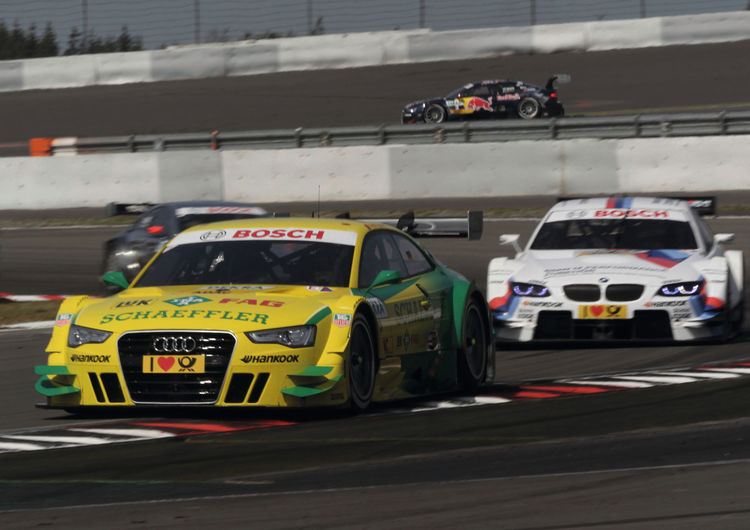 Only one week after the “heat battle” at the Nürburgring the next DTM race is on the agenda. At Zandvoort, though, completely different conditions are awaiting the Audi racers. On the Dutch North Sea Coast, much cooler temperatures and changeable weather have been predicted for next weekend.

The circuit in the dunes of Zandvoort has been on the calendar of the most popular international touring car series since 2001 and is the favorite track of many Audi racers. The Audi A4 DTM always felt comfortable on the particularly challenging roller-coaster circuit as well, having scored five victories at eight events – the most recent one last year with Mike Rockenfeller at the wheel.

Now the Audi A5 DTM is celebrating its Zandvoort premiere. At the DTM’s first event after the summer break, at the Nürburgring, the coupé left a strong impression. The Audi Sport squad wants to continue this performance and is setting its sights on the second victory of the season.

As the Audi drivers with the best point scores Spielberg winner Edoardo Mortara (Audi Sport Team Rosberg) and last year’s winner Mike Rockenfeller (Audi Sport Team Phoenix) are traveling to Zandvoort, each with 49 points to their tally. Following just two points behind them is Mattias Ekström (Audi Sport Team Abt Sportsline), who decided the race on the North Sea Coast in his favor as many as three times in the past. Timo Scheider is considered a Zandvoort specialist too. The two-time DTM Champion started from the pole position there three times.

Two DTM races within the space of eight days mean that the teams have to work overtime. After the race at the Nürburgring, the cars were prepared right on location and subsequently taken directly to Zandvoort. The next round of the 2012 DTM will be started on Sunday at 14:00. ARD will broadcast live on “Das Erste” starting at 13:45, local time.

Dr. Wolfgang Ullrich (Head of Audi Motorsport): “We’re traveling directly from the Nürburgring to Zandvoort. In the Eifel we saw that we made a step forward. Our next aim is to convert this into a victory. The track at Zandvoort has provided us with a number of good results before – we work to ensure that things will be going so well also this year.”

Hans-Jürgen Abt (Team Director Audi Sport Team Abt Sportsline): “The break between the Nürburgring and Zandvoort is extremely short. Obviously, this puts an extreme strain on everyone. But we like Zandvoort and are hoping to regain our old strength there and to be in contention for victory.”

Arno Zensen (Team Director Audi Sport Team Rosberg): “After the strong results at the Nürburgring with positions two and three in qualifying and ‘Edo’s’ second place in the race we’re obviously highly motivated. We want to take this momentum to Zandvoort next weekend and are hoping to be able to continue these successes.”

Filipe Albuquerque (27/P), TV Movie Audi A5 DTM #22 (Audi Sport Team Rosberg)
- Has scored points as many as five times this year
- Started from the second row last weekend
“Zandvoort is a nice track. I really like it and am fully motivated to rectify my starting mistake at the Nürburgring. My speed, though, was good there both in qualifying and in the race. I’m also gaining an increasingly better understanding of the Audi A5 DTM – and Audi Sport Team Rosberg is doing a superb job.”

Mattias Ekström (34/S), Red Bull Audi A5 DTM #3 (Audi Sport Team Abt Sportsline)
- In 2002, celebrated his first DTM victory at Zandvoort
- Has won the race race on the North Sea coast as many as three times before
“Zandvoort is one of my favorite tracks. I’ve driven many races there and have a lot of fond memories – for instance of my first DTM victory in 2002. After a few weekends on which we found ourselves struggling I’m hoping for a straightforward and solid race.”

Rahel Frey (26/CH), E-POSTBRIEF Audi A5 DTM #17 (Audi Sport Team Abt)
- Drove the second-fastest lap at the Nürburgring last Sunday
- Missed Q2 at the Nürburgring by merely 18 thousandths
“Honestly speaking, I don’t have the fondest memories of Zandvoort because the race last year was difficult. But I’ll be taking the momentum from the Nürburgring to the North Sea and will try and continue that.”

Miguel Molina (23/E), Red Bull Audi A5 DTM #10 (Audi Sport Team Phoenix)
- In 2010, started from the second row at Zandvoort
- Has scored points twice in the 2012 season
“Zandvoort is one of my favorite tracks. In 2010, I made it all the way into the final qualifying segment for the first time in my first DTM season. So I’ve got positive memories and am looking forward to the race. My car was very fast at the Nürburgring. The improvements are proving to be effective. I think Zandvoort can turn into a good weekend for us.”

Edoardo Mortara (25/I/F), Playboy Audi A5 DTM #21 (Audi Sport Team Rosberg)
- In 2011, scored his first points in the DTM at Zandvoort
- For the first time, is arriving at a DTM race as the best Audi driver in the standings
“It’ll be interesting to run again at Zandvoort so shortly after the result at the Nürburgring – on the track I like best in the DTM. I think many drivers feels that way. The circuit has many quick corners and is a challenge. In the past, it suited Audi very well too. I’m hoping this will continue to be the case.”

Mike Rockenfeller (28/D), Schaeffler Audi A5 DTM #9 (Audi Sport Team Phoenix)
- Celebrated his first DTM victory at Zandvoort last year
- Has the same point score in the standings as Edoardo Mortara
“Zandvoort is one of the nicest tracks – very, very fast. That suits me, I like that. Last year, I had a fantastic experience there with my first victory. If we’re in a good position again this time and the car runs well a similar success should be possible. But in the DTM you start every weekend from zero. You’ve got to fight for every thousandth – and that’s what I’m looking forward to.”

Timo Scheider (33/D), AUTO TEST Audi A5 DTM #4 (Audi Sport Team Abt Sportsline)
- Has started at Zandvoort from the pole position as many as three times
- Clinched the DTM title for Audi in 2008 and 2009
“Zandvoort has been my favorite track for years. I’ve already been on the pole position there three times but haven’t won a race yet. Maybe, of all times, everything will fit together in this strange year. I’m eager to see how the weather will develop. At the moment, the forecast isn’t so good, which could make for an especially thrilling race.”

Adrien Tambay (F/21), Audi ultra A5 DTM #18 (Audi Sport Team Abt)
- Has moved his residence to Austria
- Is contesting his first DTM season
“Zandvoort is a very challenging race track – both for the driver and the car. I last ran there at the Formula 3 Masters and am looking forward to returning to this track.”

All Zandvoort winners since 2001

Mike Rockenfeller celebrated his first victory at a DTM race in 2011. The German laid the foundation for this with a perfect start at which he pushed himself between Bruno Spengler and Jamie Green. With an early pit stop, “Rocky” managed to overtake Spengler as well. Afterward, with a perfectly set-up Audi A4 DTM, he managed to build an advantage of up to three seconds and to control the pace at the front of the field. Martin Tomczyk took third place so that two Audi drivers mounted the podium at Zandvoort.

Mike Rockenfeller about Zandvoort: “The track is nicely situated, through the dunes, and the close proximity to the sea is unique. But you often find sand alongside the racing line. You shouldn’t get off the racing line in order to keep from losing grip. Especially in qualifying, this is extremely important. For me, Zandvoort is the nicest track on the calendar: a tradition-steeped circuit with a lot of character. It is fast, has few run-off areas and some blind corners. Personally, I particularly like the right-hand downhill passage after the crest. Zandvoort offers a few places for overtaking where you can benefit from the mistakes of your rivals pretty well. In addition, the atmosphere with the large crowd is great. A special aspect of Zandvoort is that the fans can combine a visit to the beach with the DTM race.”