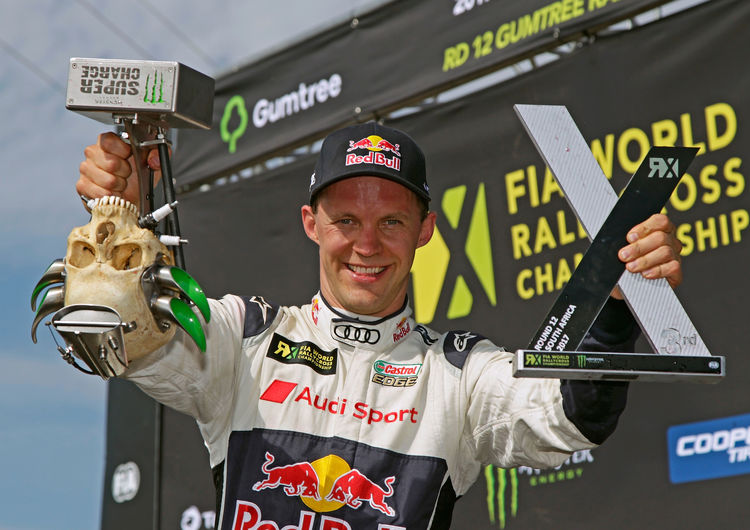 Mattias Ekström has clinched the FIA World Rallycross Championship runner-up slot. At the season finale in Cape Town, the Swede took third place and in doing so snatched second place in the overall standings from Petter Solberg, even though Ekström contested one race less than the Norwegian due to a clash of dates with the DTM. The previously crowned World Champion Johan Kristoffersson won the race in South Africa. EKS is third in the teams’ classification.

The World Rallycross Championship premiere in South Africa World greatly impressed. Packed grandstands and exciting races to the end – the last event of the season was the best advertisement for rallycross. “That was a tremendous weekend,” said Ekström with a smile. “Obviously we always want to win, but unfortunately we weren’t fast enough in the final. Second place in the overall standings is good, but at the end of the day also only the first loser. Even so I’ll celebrate this success with the team and look forward to the winter break after the long season.”

In Cape Town, Toomas Heikkinen made the semi-final for the eleventh time this season. The Finn started the race from the last row and finished sixth. “It wasn’t a bad year,” summarized Heikkinen. “It’s important for the future to make the final more often and then to fight for trophies.” Reinis Nitišs had a weekend to forget in the third Audi S1 EKS RX quattro. Following a puncture on Saturday, on Sunday the Latvian had to forget any hope of making the semi-final after a collision. “That was a frustrating end to a mixed season,” mentioned Nitišs. “After a good start there were essentially no real highlights to report from the fourth round onwards.”

A successful 2017 season concluded in South Africa for Audi and EKS. Mattias Ekström won four of the twelve races and finished third again to finish the year. In addition, Toomas Heikkinen took another podium position after finishing third at the Estering. On eleven of the twelve race weekends at least one driver in an Audi S1 EKS RX quattro made the final for the fastest six drivers. World Championship runner-up Ekström won 23 of his 75 races. With ten race wins to his name, the Swede, along with Petter Solberg, is the most successful driver in rallycross history.