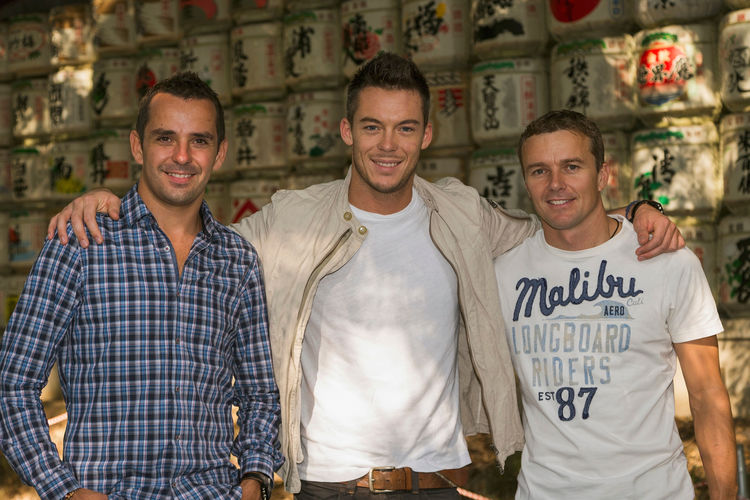 Marcel Fässler, André Lotterer and Benoît Tréluyer won the drivers’ title in the FIA World Endurance Championship (WEC) with the Audi R18 e-tron quattro. They talk about the key to success in the following interview.

You came to Audi in 2010, have won Le Mans twice and are now World Champions. Obviously, this wasn’t a bad move in your career...
Marcel Fässler: It’s an honor for me to be able to drive for Audi. I’d always been hoping that this would happen. When it did, I started being successful with my team-mates right from the beginning – first at Le Mans and now in the World Championship as well. I’m proud to be an Audi factory driver.
André Lotterer: I’m very thankful for having been given this opportunity. I was also racing in Japan for a long time – and that makes it difficult to return to Europe. The time with Audi is a huge step forward in my career. I never expected to be successful so quickly and to celebrate two victories at Le Mans.
Benoît Tréluyer: After having spent a large part of my career in Japan I wanted to return to Europe and get into endurance racing. I wanted to do this with a top team. I was fortunate enough to be able to join Audi. I couldn’t have made a better decision.

At Sebring, you started the race from pole but went home from Florida with just half-a-point due to a small defect. And despite your Le Mans win Tom Kristensen and Allan McNish – your subsequent title rivals – took the championship lead there. How did you experience your recovery that only led to the World Championship title at the finale?
Marcel Fässler: We simply tried to do our best in each race. We were always in contention and running at the front. When we finally managed to take the lead we obviously didn’t want to lose it again.
André Lotterer: With the competition being so evenly matched you couldn’t afford to make any mistakes and could only catch up point by point.
Benoît Tréluyer: At Sebring and Spa, we didn’t get the best results. We lost valuable points. In contrast, Le Mans went much better. After winning Le Mans, we thought about how to approach the rest of the championship. We were a long way behind, but did a good job and always gave our best. We had some good races and made very few mistakes. We had to finish each race and be as high up on the podium as possible. And that’s what we managed to do.

You celebrated three wins in the WEC this year. Which victory is the one you’ll remember most?
Marcel Fässler: It goes without saying that the Le Mans victory shines a bit brighter than the others. But, having said this, every win is unique, which makes it difficult to pick just one.
André Lotterer: Le Mans. It was a genuine, hard fight against our sister car all the way to the checkered flag. It was a lot of fun, but obviously very intense too.
Benoît Tréluyer: Le Mans was certainly the greatest success. I felt that Bahrain was a very pleasant surprise. There was a great atmosphere during the race. Emotionally, Fuji was a memorable, significant and generally good weekend too, even though we were disappointed that we didn’t win.

Technology is an important element of the Audi brand. You are now the first Le Mans and World Championship winners with a hybrid car. What does this aspect mean to you?
Marcel Fässler: Audi is not only a manufacturer that develops innovative technology but also ensures that the technology quickly produces on-track successes. We most recently saw this at Le Mans with hybrid drive. It was impressive for me to have been involved in the entire development. We were part of the project from the word go – and if you then actually manage to take the first win it’s definitely a special experience.
André Lotterer: Looking at all the milestones that Audi has achieved in motorsport so far makes me think of people like Walter Röhrl or Michèle Mouton. They are real legends who are closely associated with the brand as a result of their successes. I’m wishing for the hybrid win to be another important victory of this kind that demonstrates Audi’s Vorsprung durch Technik and may perhaps be linked to our names a bit as well.
Benoît Tréluyer: I really love it – testing new technologies is always a thrilling experience as we get to develop a piece of the future for the cars of tomorrow. It’s great to have written another chapter in the technology history books at Le Mans and in the WEC. We accomplished our mission, so 2012 was another historically important year. Perhaps I’ll learn to fully appreciate that when I’m older. Today, I’m mainly enjoying the emotions that are associated with it.

There were a lot of tracks on this year’s calendar that were new for you. Did any of them immediately become one of your favorites?
Marcel Fässler: Every circuit has something fascinating about it. I thought Brazil was fantastic. It’s a tradition-steeped track with so many memorable moments and important races. Japan impressed me deeply as a country. The friendliness and mutual respect were a wonderful experience.
André Lotterer: I’ve been living in Japan for nine years and love the country, which is why I was delighted that Fuji was on the calendar. With the many fans there, it was almost like a home race for me. Besides Fuji, Sebring, Spa and Le Mans were my highlights.
Benoît Tréluyer: Silverstone was a fascinating experience for me. Brazil was excellent too, although grip on this track was not the best. I like classic tracks better than modern ones and am also interested in the history that’s associated with them.

What was the toughest race of the season?
Marcel Fässler: Without a doubt, the Le Mans 24 Hours. The pressure during this race is simply enormous, you can’t make any mistakes. After my spin, I just wanted to be absolutely sure to do everything right – that put an extreme mental strain on me.
André Lotterer: For me it was Bahrain because of the incredible heat both in and outside the cockpit – especially during my double stint. Mentally and physically, that was the toughest thing I’ve experienced in motorsport so far.
Benoît Tréluyer: I found Fuji to be the hardest race, both physically and mentally. We had to attack from the beginning to the end. It was very tough in traffic and required total concentration. In the final section of the track it was difficult for us because we were only allowed to use our hybrid system for extra propulsion above a speed of 120 km/h. The set-up for three entirely different track sectors was very difficult to come up with as well.

Toyota was a strong challenger. Was the second half of the season tougher than expected?
Marcel Fässler: We could see Toyota’s pace as early as at Le Mans. Reliability was still lacking there but we knew that they were a serious competitor. They caused a bit of trouble for us more than once, so we can’t afford to rest on our laurels.
André Lotterer: Toyota and Audi have different concepts that benefit them in their own specific ways. While our e-tron quattro is very efficient, the competition was quicker here and there. Toyota has a great deal of experience in motorsport, so I wasn’t really surprised about them being such a tough opponent.
Benoît Tréluyer: I respect what Toyota has achieved. We’re competing with different technologies. Our car is extremely good particularly in fast corners. In the second half of the season there were many circuits with very tight corners, like Bahrain or Shanghai, that didn’t suit our concept so well. Instead, we’ve got a particularly efficient car in the R18 e-tron quattro. That’s why both concepts were often battling for victory up to the end of the race.

After Le Mans, you recommended staying together as a trio. Did this pay off?
Marcel Fässler: I’m grateful to Dr. Ullrich for having given all three of us the opportunity to become World Champions. We knew that as a threesome we’d have to make more compromises than squads competing with just two drivers. But we’re a team and all three of us were pursuing the World Championship title as our big aim.
André Lotterer: We’re a great squad and always have a lot of fun when we’re racing together. I thought it was cool that we could stay together. Even though it may have some disadvantages, the feeling of sharing successes as a threesome more than compensates us for anything else.
Benoît Tréluyer: It was certainly the right decision, even though running as a trio may not be an advantage in every respect. In free practice, you lose personal cockpit time if the total time available is split fairly between all three drivers. And particularly in the second half of the season, many of the circuits were new to us. But we remained true to our team spirit. On tracks like Bahrain, it was an advantage since it was incredibly hot in the race and being able to swap between three drivers gave us more time to recover.