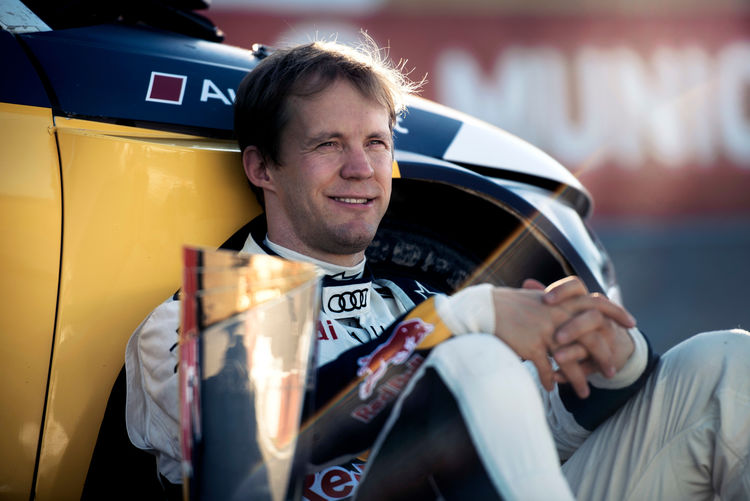 Mattias Ekström will again be competing in a dual role in 2017. Following remarkable years in the DTM and two titles with Audi, the Swede is determined to claim the top spot now in the new, more than 500-HP Audi RS 5 DTM too. And as the reigning World Rallycross Champion he has only one aim in the up-and-coming racing series as well: to win the title again this year. The season will open at the Circuit de Barcelona-Catalunya not far from the Spanish metropolis, on April 1 and 2. Starting this year, Ekström can also rely on support from Audi’s motorsport department.

Mattias Ekström is collecting more frequent-flyer miles these days than many top executives. The 38-year-old is rushing from one appointment to the next as part of his preparation for the season. The fitness camp with his team, EKS, in snow-covered Sweden was followed by tests in the Audi S1 EKS RX quattro with its 560-HP turbo engine at Mettet. Immediately afterwards, as one of the key people involved in the DTM test, he traveled to Vallelunga, Italy. Plus, there are numerous Europe-wide commitments with sponsors, suppliers and partners he handles as a team boss to ensure that a powerful squad in competitive cars will be on the World RX grid in 2017. “Preparing for the season is always especially stressful for me because of the demands it makes on me as both a driver and team boss,” says Ekström. “This is the time that determines how the whole year of racing will go. Only those doing their homework properly will win in the end.”

Ekström knows what he is talking about. On winning the world championship title in the 2016 World RX, he proved once again that he is one of the most universal race drivers. In the past 16 years, he contested a total of 177 DTM races for Audi Sport Team Abt Sportsline, celebrating 22 victories and two titles (2004, 2007) in the process. With that, Ekström is the most successful Audi DTM campaigner in history. In addition, his career has seen him triumph four times in the Race of Champions – once in the teams’ classification with Tom Kristensen (2005) and three times in the single classification (2006, 2007, 2009), defeating the seven-time Formula 1 World Champion Michael Schumacher, among others. In addition, his track record includes stints in the World Rally Championship and the NASCAR series, plus overall victory in the world’s most prestigious endurance race: the 24 Hours of Spa.

Ekström is more than just a race driver. Since 2014, he has been a team boss as well, a dual role he could not imagine for a long time, especially in rallycross. “When I was a young boy my father was competing in rallycross, but it took me a long time to develop any enthusiasm for this sport. Rallycross was always too dirty for me,” relates Ekström. Running as a guest entrant in the 2013 European Rallycross Championship at Höljes, Sweden, changed his opinion. ”I finished second and decided to return and win.” Together with friends, partners and longstanding companions he began to put his plan into action.

What followed was a long road, packed with passion and sacrifice, toward a success story that nearly reads like a fairy tale. On June 14, 2014, Ekström makes his racing debut in a World RX round in the Audi S1 EKS RX quattro. And only three weeks later, in his home round at Höljes, he actually mounts the very top of the winners’ rostrum. Finally, 857 days following his premiere, he puts on the World Champion’s crown early. “What my team and I built within that period of time is incredible,” says Ekström. By now, his outfit employs about 25 people – including mechanics, race engineers, a media team and chef Jonas Landmark, who has even served the Swedish King before. “I personally selected all the team members,” says team boss Ekström. “That’s very important for me. All of them are experts in their field and friends as well. They think the way I do and know how to jointly celebrate success: with passion, commitment and, above all, fun.”

Thanks to factory support from AUDI AG, the EKS project continues this year. “We realize that it’s becoming increasingly difficult for EKS to stand its ground against the Ford, Peugeot and Volkswagen factory teams and the other competitors, so we decided to intensify our commitment in the World Rallycross Championship,” says Head of Audi Motorsport Dieter Gass. In the 2017 season, EKS will be on the grid with three Audi S1 EKS RX quattro cars for the first time. “Together with Audi Sport we worked hard to field three cars. I’m very happy that we made this happen,” says Ekström who, together with the Finn Toomas Heikkinen and new signing Reinis Nitišs from Latvia, forms the driver trio. But an additional car means more work for Ekström as well – a challenge he tackles with a spring in his step.