Skip to content
We are using cookies for a better user experience.
10/23/19
Neuburg a. d. Donau
Sports

With TFSI power: record year for Audi in the DTM 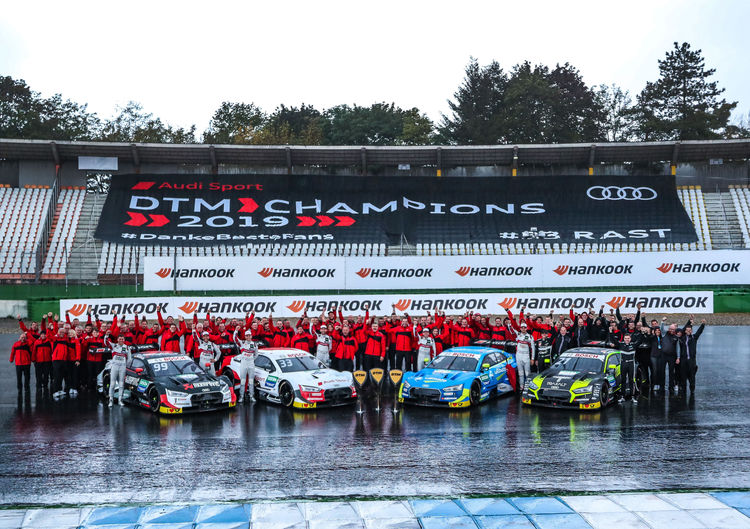 Since as far back as 2001, Audi has been combining turbocharging with gasoline direct injection (TFSI) in production cars. When this efficiency technology was rolled out in the DTM, the brand with the four rings leveraged its experience-based advantage and set numerous records in the 2019 season.

The four-cylinder turbo engine of the Audi RS 5 DTM is the most efficient and most powerful engine in the company’s DTM history. In its first year of racing, Audi’s engineers extracted more than 610 horsepower from the power-plant with just two liters of displacement.

In terms of reliability, the new engine was instantly exemplary as well: Audi was the only manufacturer to use no more than the allocated number of 1.5 engines per car and therefore did not suffer any deduction of points in the manufacturers’ championship. At the end of the season, Pietro Fittipaldi’s engine had the highest mileage of more than 5,000 kilometers.

Even before the end of the season, Audi secured all three titles in the drivers’, manufacturers’ and teams’ championships in 2019. As a result, the brand scored its third triple DTM win after 2004 and 2017.

Audi won the manufacturers’ championship with a 582-point advantage – marking the largest one in DTM history. As the first manufacturer ever, Audi scored more than 1,000 points (1,132) in one DTM season. In as many as three races in 2019, Audi netted the maximum number of points in the manufacturers’ classification.

In 17 of the 18 races, at least one Audi driver started from the front row.

On six of the currently eight DTM tracks, the Audi RS 5 DTM has held the DTM lap record since this season. The absolutely fastest lap of the year, at an average of 193.2 km/h, was set by René Rast in Sunday’s qualifying at Assen.

Top speed was also credited to the new Audi RS 5 DTM: during the Hockenheim season opener, Mike Rockenfeller was clocked at 291 km/h on the second lap of Sunday’s race.

In Sunday’s race at Brands Hatch, all eight Audi RS 5 DTM started from the top eight spots on the grid.Eight cars from the same brand had been seen in the DTM only once before: in 2016, at Budapest, also from Audi.

In Sunday’s race at the Nürburgring, Audi celebrated a seven-fold success – as a result, the brand equalized the previous record (BMW/Zandvoort 2015).

In Saturday’s race of the finale at the Hockenheimring, the Audi RS 5 DTM, which has been fielded since 2013, scored its 50th victory.Witha current track record of 51 victories, the Audi RS 5 DTM is the most successful model since the DTM’s revival in 2000.

An amazing number of five new DTM records were set by René Rast in the 2019 season: The Audi driver won his second DTM drivers’ title with an advantage of 72 points – the largest one in DTM history. He is the first DTM driver to have secured the title twice in his first three DTM years. He scored 35 points just in qualifying, started from the front row on 13 occasions and seven times from pole position – surpassing the record set by Nicola Larini, who in 1993 had started from the front row twelve times.

René Rast has contested 59 DTM races in his career so far, having scored 760 points in the process – which equates to an average of twelve points per race.

All six Audi factory drivers finished the 2019 season in the top eight – which has never been seen before.

Jonathan Aberdein from the customer team WRT Team Audi Sport scored 67 points in his first DTM season, which made him best Rookie of the Year 2019.

In the teams’ championship,the threeAudi Sport Teams, Rosberg, Abt Sportsline and Phoenix, took the top three spots – three teams from the same manufacturer in the top three had last been seen in the DTM in the 2001 season.

By introducing high-efficiency turbo engines, the DTM achieved a significant CO2 reduction in the 2019 season. In the finale at Hockenheim, Audi, together with series promoter ITR and its technology partner Aral, made the next major move: For the first time, the two Audi RS 5 DTM race taxis used an innovative fuel that results in a 30-percent improvement of the carbon footprint.The utilization of innovative fuels and implementation of hybrid systems are key topics for Audi and the DTM going forward.