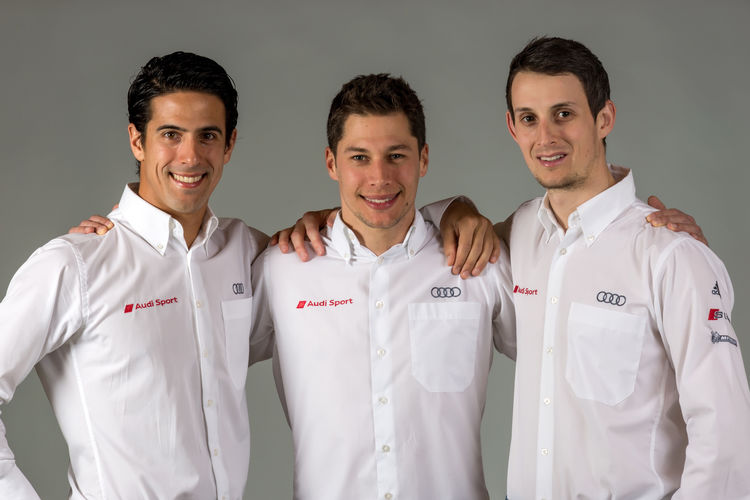 When Lucas di Grassi (BR), Loïc Duval (F) and Oliver Jarvis (GB) start the FIA World Endurance Championship (WEC) in April, they will do so as established Audi drivers. Still, the situation will be completely new for each of them, as they’re forming a driver team for the first time.

Oliver Jarvis has been driving for Audi since 2008 while Loïc Duval and Lucas di Grassi have been with the brand since 2012 – together, their time with the four rings amounts to 13 years. The generation change in Audi’s driver line-up is the reason why they now form a team for the first time. Allan McNish, Tom Kristensen and Dindo Capello, who spent between one and a half and two decades of their careers with Audi, have since retired from their active careers as race drivers. “This gave us the opportunity to combine the three younger talents into a new driver squad,” says Head of Audi Motorsport Dr. Wolfgang Ullrich.

Loïc Duval already raced together with Lucas di Grassi last year. Oliver Jarvis, who in the past occupied the third cockpit in WEC races at Spa and at Le Mans, is now contesting all eight WEC rounds as a new regular driver for the first time. “This has always been my big aim. It’s a huge opportunity that I’m determined to make optimum use of together with Lucas and Loïc,” says the pleased 31-year-old Briton from Burwell, who had previously been active for Audi in the DTM for four years and clinched his first sports car victory in the Sebring 12 Hours two years ago.

Lucas di Grassi, on clinching three second places at Spa, Le Mans and Austin last year, has shown the type of ambitions he has. “Obviously, I’d like to be the first Brazilian to win the Le Mans 24 Hours,” says the 30-year-old South American. And Loïc Duval would preferably give himself a gift two days after his 33rd birthday. Following his first victory at La Sarthe in 2013 with Kristensen and McNish, he is now aiming to clinch the next trophy in the iconic 24-hour race. The Frenchman still holds the lap record there which he set in 2010.

In these three drivers we’ve got a strong squad on the grid that is set on competing with our three-time Le Mans winners Marcel Fässler, André Lotterer and Benoît Tréluyer,” Dr. Wolfgang Ullrich is certain. “Our driver line-up for 2015 is balanced, experienced and strong. I can fully rely on them. They’re an important element in the WEC battle with the other three manufacturers.”