Links
{{ activeItem() }}
Twitter
08/12/20
“Yeah, very, very happy. Third place, my first podium in Formula E.” – @ReneRastRacing. More from him,… https://t.co/wgaJ7TisrR
08/12/20
Fanboost is open for round 11 of @FIAFormulaE in Berlin. Vote for @LucasdiGrassi and @ReneRastRacing: &gt;&gt;… https://t.co/QxTqG36A7o
08/12/20
Our position in the teams’ standings with one race to go in the 2019/2020 @FIAFormulaE season. &gt;&gt;… https://t.co/9ZYmWo7wfz
08/12/20
.@ReneRastRacing’s podiums moves him up to 16th in the drivers’ standings. @LucasdiGrassi is still in the battle to… https://t.co/WfcM5YGfxW
Audi Sport on Twitter
{{ activeItem() }}
Facebook
08/11/20
Victories for the Audi R8 LMS in the GT World Challenge Europe at the Misano World Circuit highlighted a weekend with wins and podiums around the world. Well done to our customers. 🇮🇹 🇩🇪 🇨🇳 🇷🇺 🇧🇪 🇿🇦 🇸🇪 🇺🇸 >> audi.com/GT3 >> audi.com/GT4 >> audi.com/TCR #PerformanceIsAnAttitude
08/10/20
Before heading to Lausitzring this weekend, let’s have a quick look back on the DTM safety measurements at the track in Nico Mueller’s latest #DriversDiary. >> audi.com/DTM #PerformanceIsAnAttitude #ThanksToDTM
08/10/20
We will be back racing at the Lausitzring for the next two weekends. Let’s have a look back on our history at the circuit. >> audi.com/DTM #PerformanceIsAnAttitude #ThanksToDTM
08/03/20
What a start to the DTM season it was for Nico Mueller! Race victory and he is currently leading the drivers’ standings. See how he experienced the weekend in his latest #DriversDiary. >> audi.com/DTM #PerformanceIsAnAttitude #ThanksToDTM
Audi Sport on Facebook 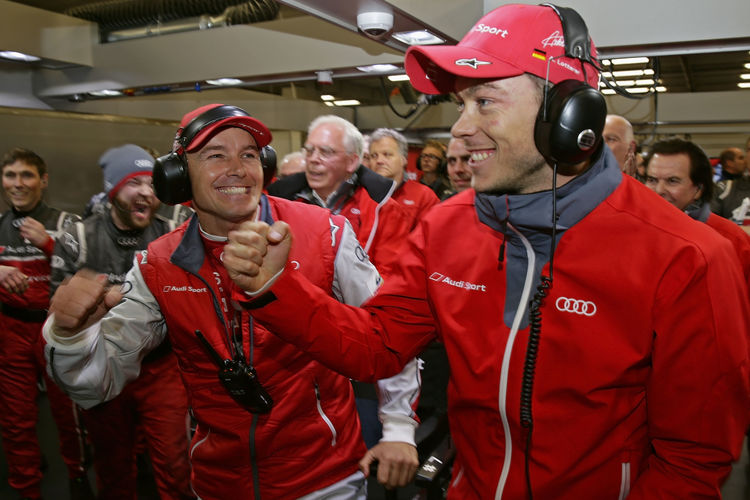 Dr. Wolfgang Ullrich (Head of Audi Motorsport): “The FIA WEC is developing superbly. The race at Spa has confirmed that the close battle at Silverstone was not a coincidence but that this high competitiveness is characteristic for this season. Marcel Fässler, André Lotterer and Benoît Tréluyer managed to deliver a brilliant race. In global motorsport, the World Endurance Championship has become a series that draws a lot of attention and is highly respected. I’m convinced that at Le Mans we’re again going to see a sporting competition that’ll be more thrilling than it has been in a long time. At Le Mans, we’re determined to again show that our efficiency technologies prevail. Following a lot of test kilometers and the first two races of the season, we feel that we’re well prepared for tackling these tasks.”

Chris Reinke (Head of LMP at Audi Sport): “It’s been a very emotional race and from a sporting perspective it was just as valuable as the opening round at Silverstone. The 2015 season is developing into a thriller. We saw that the decisions remain open up to the last lap. Marcel Fässler, André Lotterer, Benoît Tréluyer and the whole squad showed strong on-track and tactical performances. Our number ‘9’ was doing well too, secured fourth place with a stunning performance and pulled clear of several renowned rivals. René Rast managed a good debut. For our number ‘8’ we’re hoping that its misfortune will come to an end before Le Mans. Lucas di Grassi, Loïc Duval and Oliver Jarvis were beaten below their potential today.”

Ralf Jüttner (Team Director Audi Sport Team Joest): “It looks like close duels up to the final lap are now becoming the rule in the 2015 FIA WEC season. That’s great for our audience and we’re pretty strung up until the flag falls. That’s what good racing is all about. Our whole team gave their all. Our tire partner Michelin was one of the ingredients in our success today. In terms of tactics, an excellent performance was possible with these tires even across long distances, so our work last winter went in the right direction. Now we’re facing the biggest challenge of the year, the Le Mans 24 Hours.”

Marcel Fässler (Audi R18 e-tron quattro #7): “A fantastic race! Winning twice in a row feels good, because we were able to confirm our performance from Silverstone here. I was especially happy about this victory for the mechanics and the team that worked so hard last winter. I’d also like to thank my two team-mates for their excellent performances.”

André Lotterer (Audi R18 e-tron quattro #7): “For me, Spa is a home round because I grew up in Belgium. Winning a home race in front of many friends and my family is especially sweet. It was a tough job just like Silverstone. We drivers had to make sure not to make any mistakes, go to the limit lap by lap and meet the team’s tactical requirements. The tires were a key to success today because they were consistent even across longer distances. The season’s been thrilling so far but will surely become even more intense at Le Mans.”

Benoît Tréluyer (Audi R18 e-tron quattro #7): “Clinching the tenth joint WEC victory with André and Marcel was awesome. The duel for victory in a six-hour race has long turned into a battle for tenths of a second. The final stage with the fight against Porsche was huge fun. I’m sure the fans can already look forward to the next classic at Le Mans.”

Lucas di Grassi (Audi R18 e-tron quattro #8): “Spa was an emotional roller-coaster for us. The accident in the practice session that wasn’t our fault cost us a lot of time, so we’re even happier that our race was good from the beginning in spite of the missing kilometers. Loïc Duval had already advanced to second when a number of issues came up. Of course that’s a shame because we again lost a lot of points. Still, I believe that we’re in contention for a good result at Le Mans. Everything just has to finally fit together.”

Loïc Duval (Audi R18 e-tron quattro #8): “It’s important for us to stay concentrated in spite of our setback and that we won’t let the results of the season so far affect us. We know how to win at Le Mans. It’s been two years since I was able to celebrate my first victory with Audi in this classic. Audi Sport Team Joest is a strong squad. We’ve got all it takes to be successful and that’s why I believe in our opportunities.”

Oliver Jarvis (Audi R18 e-tron quattro #8): “I’m happy that Audi had such a good weekend at Spa and that the R18 e-tron quattro won for the second time this season. Unfortunately, we weren’t able to contribute to this win. I’m sorry that I slid into the gravel trap in the end. We need to shake off the bad luck we’ve had in the season so far and look ahead. At Le Mans, we’re going to attack again.”

Filipe Albuquerque (Audi R18 e-tron quattro #9): “Our goal was to battle with Toyota and, ideally, with Porsche too. At the end, we’d even pulled clear of both Toyota cars. On a clear track, our car was good. But in dueling it was a little difficult on the straights with high downforce. Marco (Bonanomi) drove a strong triple stint in the beginning and René (Rast) managed a good debut in our team. After this positive weekend, we’re already looking forward to Le Mans now.”

Marco Bonanomi (Audi R18 e-tron quattro #9): “Fourth place is very positive four us. I had a moment of shock during my third stint when the window came loose on the straight. This cost us some time because we had to pit. But the outcome is a great result for our mechanics. ‘Well done’ to our team-mates who celebrated their second consecutive victory here.”

René Rast (Audi R18 e-tron quattro #9): “For me, driving an LMP1 sports car for the first time in a race was a highlight but it felt exactly like I’d been expecting beforehand. It wasn’t easy to jump into the car and to dig myself through the traffic but I felt really comfortable and had a lot of fun. I’m very happy with fourth place and I gathered a lot of experience for Le Mans.”