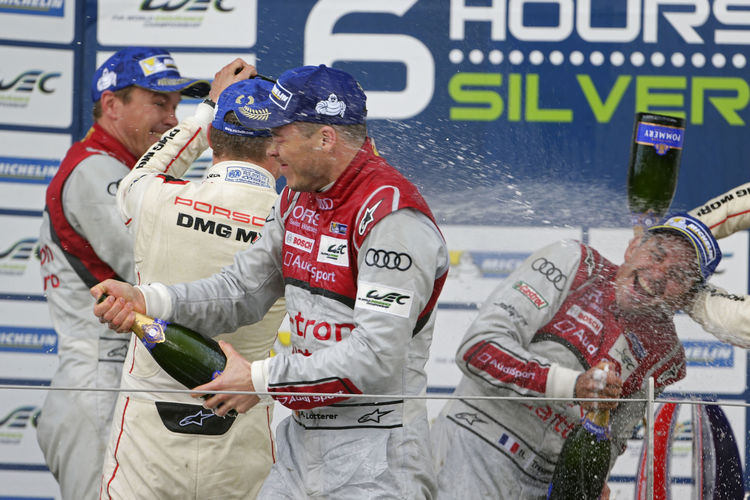 Dr. Wolfgang Ullrich (Head of Audi Motorsport): “The whole squad worked hard last winter, so it’s great to have clinched this victory in the season opener at Silverstone. The race showed that we managed to get a very good car off the ground, which provides us with a good base for the season. This was a tremendous start for the WEC and the battles we saw were absolutely impressive. I don’t think it’s possible to deliver more thrilling motorsport than this. Tonight we have a reason to celebrate but we’re already looking ahead: there’s still a lot of work to be done for the next race at Spa and the season’s pinnacle event at Le Mans.”

Chris Reinke (Head of LMP at Audi Sport): “The season opener was a spectacle from the first to the last minute – awesome! But we expected this environment. There are three manufacturers on the grid who are bound and determined to win. All three of them worked hard last winter. The result is a very close field that’s going to put extreme demands on us throughout the season. Obviously, our victory at Silverstone was a tremendous step and important confirmation for everyone involved: for the team in Neuburg and Neckarsulm that worked hard last winter and for the team that effectively prepared for this race. We delivered a strong performance throughout the weekend and had so much potential in our R18 e-tron quattro that in the end it couldn’t even be stopped by a questionable decision by the stewards of the meeting.”

Ralf Jüttner (Team Director Audi Sport Team Joest): “This was an awesome race! We knew that it would be very close. But today we saw a 6-hour sprint race. Absolutely crazy! Normally, you have a few quieter stages in between. But this time, there was so much happening that you could never relax. At the beginning, we lost a lot of time behind the Toyotas – but it was okay – despite the stop-and-go penalty. I was less concerned about the time loss than about Marcel (Fässler) having to pit twice in succession, which causes the tires to cool down, and Marcel was subsequently struggling with that. We realized that the Porsche would get past us if it got too close on our heels. But Marcel did a great job of managing our advantage.”

Marcel Fässler (Audi R18 e-tron quattro #7): “As often as Neel (Jani) and I overtook each other is something that I’m sure has rarely ever been seen in a sports car race. It was a very fair fight that was fantastic for both of us. Neel sent me a text right after the race confirming this. There wasn’t a lot of space between our cars at times but we never touched and always left each other some room. Unfortunately, that’s something that doesn’t happen a lot anymore. Of course you could also see where the Porsche has its strengths. On the straights, I had to defend myself with my hands and feet and in traffic I was never fortunate enough to have a GT car between us as a buffer. As a result, he always managed to pass me on the straights pretty easily. Still, it was fun. It was also a pleasure to watch my two team-mates. It was a great weekend. Our victory is fantastic and we had the fastest car. This shows that our people in Neuburg and Neckarsulm did a superb job in winter.”

André Lotterer (Audi R18 e-tron quattro #7): “It was an incredibly exciting race – in the cockpit as well as while watching my two team-mates on track: great advertising for the WEC and for Audi. For us, it’s fantastic to come home with a victory after a longer period of time. Audi Sport has made use of all its resources for the update of our R18 e-tron quattro. We had the fastest car at Silverstone, that’s why we won. We’ve got to live with being slower on the straights. That means we’ve got to overtake on the straights and then try and get away quickly to keep from being overtaken again on the straights. I managed to do that well at Silverstone. I also believe that our car is the most enjoyable one to drive. It simply hugs the track.”

Benoît Tréluyer (Audi R18 e-tron quattro #7): “I remember my first race weekend here well. It was in 2012 and I clinched the pole position, in front of the local hero Allan McNish of all people. It’s always good to return to a track with such fond memories. Today was a perfect day. Everyone was sorted, extremely focused and working together on achieving the big aim. It was simply fantastic. Now we’ve got our first victory in our pocket and are going to give everything to take this positive energy and team spirit with us to Spa.”

Lucas di Grassi (Audi R18 e-tron quattro #8): “I have a very special relationship with Silverstone because I lived in Oxford and subsequently in London for a long time and did a lot of testing and racing here. The place has so much tradition, which I really like. This weekend was incredible: so many fans and such a thrilling race at the beginning of the season is a perfect start of a new WEC year. Congratulations to the organizers on this superb event. From a sporting perspective, we saw how close this year will be. That’s good for Audi because we welcome challenges.”

Loïc Duval (Audi R18 e-tron quattro #8): “For me, winter was a bit too long, so I’m happy that the season has finally started. When you think of the UK you often think of bad weather and difficult conditions, but this time we had a fantastic race day with many fans. We arrived with high expectations but obviously a few question marks as well because you never know where you stand compared with the competition. We were immediately well sorted in the first practice session. The weather was looking good during the race but the strong wind could even be felt in the car. Audi won, that’s our main goal. Of course I’d have liked to mount the podium too but fortune was not on our side today.”

Oliver Jarvis (Audi R18 e-tron quattro #8): “The days before my first full WEC season and the race weekend itself were a fantastic experience. Working together with Lucas (di Grassi) and Loïc (Duval), to learn and to contest the season opener with them was great fun. Saturday night we all went to sleep with a smile because we had a good qualifying session and extracted the maximum from our car. Sunday wasn’t quite as perfect. I wouldn’t want to call it misfortune because we weren’t completely impeccable ourselves. Fifth place isn’t what we’d expected, but there are many positive aspects as well: Audi won, so that the hard work of the whole squad last winter paid off. This weekend was my home race but, strangely enough, I raced on this track just once in the past nine years – I’ve actually got more experience at Oschersleben than at Silverstone.”