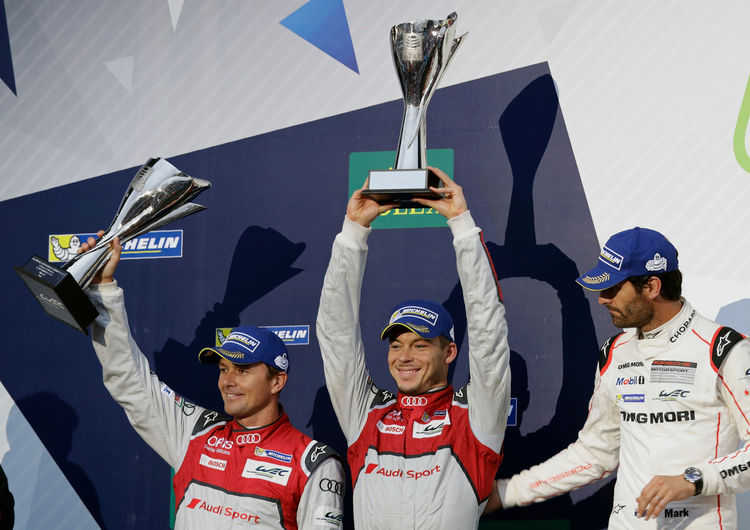 Dr. Wolfgang Ullrich (Head of Audi Motorsport): “We would have had the performance today to win the race. Unfortunately, both cars had technical issues and weren’t able to put their potential on track. This is particularly disappointing in view of the fact that we had the fastest cars in the field for a long time. In such a fiercely competitive racing series, only those who combine top performance with perfect reliability will win.”

Stefan Dreyer (Head of LMP): “Congratulations to the two drivers of our number 7 on clinching second place. We’d very much have liked to achieve a little more. We had the fastest car today, so we’d have liked to clinch victory as well. Both Audi R18 cars were powerful, but not reliable enough. Now we’re going to thoroughly analyze the issues in order to be better at Austin in two weeks.”

Ralf Jüttner (Team Director Audi Sport Team Joest): “Number 8 was running perfectly from the beginning and set the pace.We made the right tire choice as well. Unfortunately, technical issues subsequently occurred and it was only enough for P5 in the manufacturers’ championship at Mexico. Number 7 had to make an early pit stop and lost time because all other opponents stopped later under full course yellow. Instead, André Lotterer regained a lot of time on intermediate tires when everyone else was running on rain tires. André would have had a chance for victory if a brake issue hadn’t occurred near the end.”

Marcel Fässler (Audi R18 #7): “I look back on the race with mixed emotions. On the one hand, our pace was good enough for victory in Mexico. On the other hand, various defects repeatedly caused us to lose ground.André’s performance in rain on intermediate tires was top class.”

André Lotterer (Audi R18 #7): “Mexico was an eventful race – unfortunately! The start was good. Then the tires clearly degraded and we opted to pit early. That cost us a lot of time because the other teams were able to stop later in a full-course yellow period. But in the rain, we suddenly clearly advanced again. I was getting closer and closer to the leading Porsche when an issue with our electronic brake system occurred. Second place doesn’t feel so good knowing that victory would basically have been possible.”

Lucas di Grassi (Audi R18 #8): “Following pole position, the race started in a very promising way. I was initially leading, but then some technical issues occurred.With a basically strong car we’d have liked to clinch a good result. That would have been important for the championship. This way, however, the weekend was a missed opportunity.”

Loïc Duval (Audi R18 #8): “Today, unfortunately, the worst situation you can imagine occurred for our championship: we didn’t score any points in the drivers’ classification in the race. In the beginning, we had great battles withPorsche. The tire choice during the rain was great too, but then the setbacks came. Now we need to make the best of the remaining races.”

Oliver Jarvis (Audi R18 #8): “We were doing really well when I noticed that the car was feeling strange. My engineer warned me saying that I should brake carefully. Unfortunately, I had no chance to react and slid into a tire barrier. The end result is a shame for us and all the team members who did such a good job, because the strategy was perfect as well. We could have made a step forward in the championship today but, unfortunately, we didn’t manage to do that.”